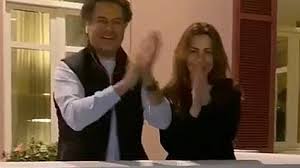 In what has now become a global way of showing support and appreciation for medical workers around the world, Lebanese celebrities have joined together in thanking the doctors and nurses fighting on the front lines against the coronavirus in their home country.

On Sunday evening, using the Arabic hashtag ‘a cheer for the heroes’, celebrities such as superstar Ragheb Alama and pop singer Nancy Ajram, posted videos standing on their balconies, cheering and clapping with their families.

“Whatever we do, it won’t be enough,” Ajram wrote on Twitter, along with a video standing on a balcony with her husband and clapping.

“God bless all the medical workers. We also want to salute the Lebanese Red Cross and the Civil Defence … God bless you all,” he said in the video.

“The the least that we can do from the comfort of our home is to give [medical workers] this salute from the heart,” he said.

In Lebanon, 10 people have died out of 438 reported cases. Lebanon, which has been on lockdown since mid-March, has recently stepped up measures to contain the spread of Covid-19 by imposing a curfew between 7pm and 5am for shops and people.