Nasrallah denies any deal with US over Fakhoury’s release 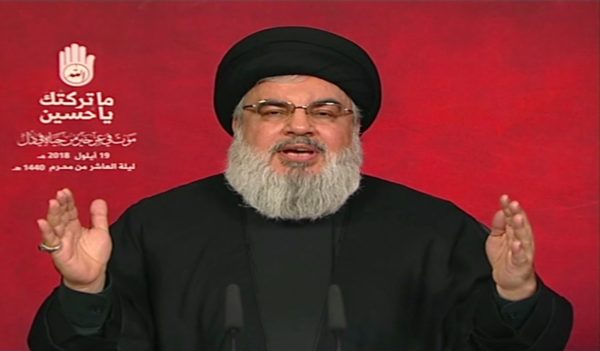 Hezbollah chief Hassan Nasrallah on Friday denied that his party had any knowledge of any Lebanese-American deal to release former Khiyam Prison warden Amer Fakhoury from prison.

“ What we know is that there was no deal,” Nasrallah said in a televised address.

“From the first moment after Fakhoury’s release, a campaign was launched against the Shiite duo (Hezbollah and AMAL),” he said.

Nasrallah added: “Ever since Fakhoury was arrested six months ago, the U.S. started exerting strong pressures on the Lebanese state to resolve this issue and release this collaborator without any conditions.”

Nasrallah stressed that Hezbollah had rejected Fakhoury’s release when asked about the case by certain political parties, He slammed the move as “a dangerous development that will allow Americans to impose what they want in the future.”

“We thought that no such ruling would be issued and that the court would not convene amid the current circumstances, but we learned of the collaborator’s release from media outlets,” he said.

Nasrallah also revealed that “direct threats were made as to placing some individuals on the sanctions list, halting aid to the Lebanese Army, slapping economic sanctions and preventing world nations from offering assistance to the Lebanese state.”

“A lot of pressures was exerted on the judges and there are judges who issued a travel ban and others who submitted and issued a release order,” he said.

He stressed that Hezbollah “did not face any pressure at all from any political party in Lebanon regarding Fakhoury’s case.”

Addressing some “friends and allies,” Nasrallah added: “We have swallowed the harm and insults but from now on, we in Hezbollah will not allow a friend or ally to accuse, insult or launch treason accusations against it. They better stop being our friends.”

Turning to the coronavirus crisis and Lebanon’s measures to confront it, Nasrallah said it is “shameful” to deal with the issue in a “sectarian” manner.

“The government should isolate any region it wants even if it’s a Shiite region,” he suggested.

Many in Lebanon blame Health Minister Hamad Hassan for the coronavirus out break in Lebanon .

Flights from Iran continued to land in Beirut. even after a ban was placed by the Hezbollah backed government on all flights from infected countries .
Sick Iranians are reportedly coming to Lebanon for Coronavirus treatment .

Iran has become the epicenter of the deadly coronavirus in the. Middle East. Nine out of ten coronavirus cases in the Middle East reportedly originated in Iran .

US President Donald Trump announced Thursday that Lebanese-American Amer Fakhoury has been released from prison, describing the development as “very big.”

“Today we are bringing home another American citizen, big thing, very big,” Trump said at the beginning of a coronavirus task force briefing.

A US Air Force Bell V-22 Osprey Helicopter landed at the US embassy just north of Beirut , Lebanon and minutes later it airlifted Fakhoury .

Lebanese media reported last December that U.S. diplomat David Hale reportedly discussed during his visit to Lebanon with caretaker foreign Minister Jebran Bassil the possibility of a “prisoner swap” to free Fakhoury in return for freeing Lebanese businessman Qassem Tajeddine a Hezbollah “financier” who was  arrested by the United States of America on charges of financing Hezbollah.

Tajeddine was arrested in 2017 in Morocco. The US says he provided millions of dollars to Hezbollah.

President Trump also denied that Fakhoury’s release was the result of a deal with Hezbollah , which the Us cond=siders a terrorist organization.

Foreign Minister Nasif Hitti summoned the US ambassador to Lebanon Dorothy Shea and asked for an explanation on how Amer Fakhoury was taken from from the U.S. embassy, National News Agency reported on Friday

Fakhoury had been accused of torturing prisoners at a jail run by an Israeli-backed militia two-decades ago. Has been  accused of being the “Butcher of Khiam.” He had been imprisoned since September after returning to Lebanon to visit his relatives.

Trump said that Fakhoury, was suffering from late-stage cancer, and he “will now be able to receive the much needed care and treatment in the United States.”

“We’ve been working very hard to get him freed. He’s finally able to have his entire family at his side,” Trump told reporters at the start of a daily news conference on the coronavirus pandemic.

“I’m very grateful to the Lebanese government. They worked with us,” Trump added.