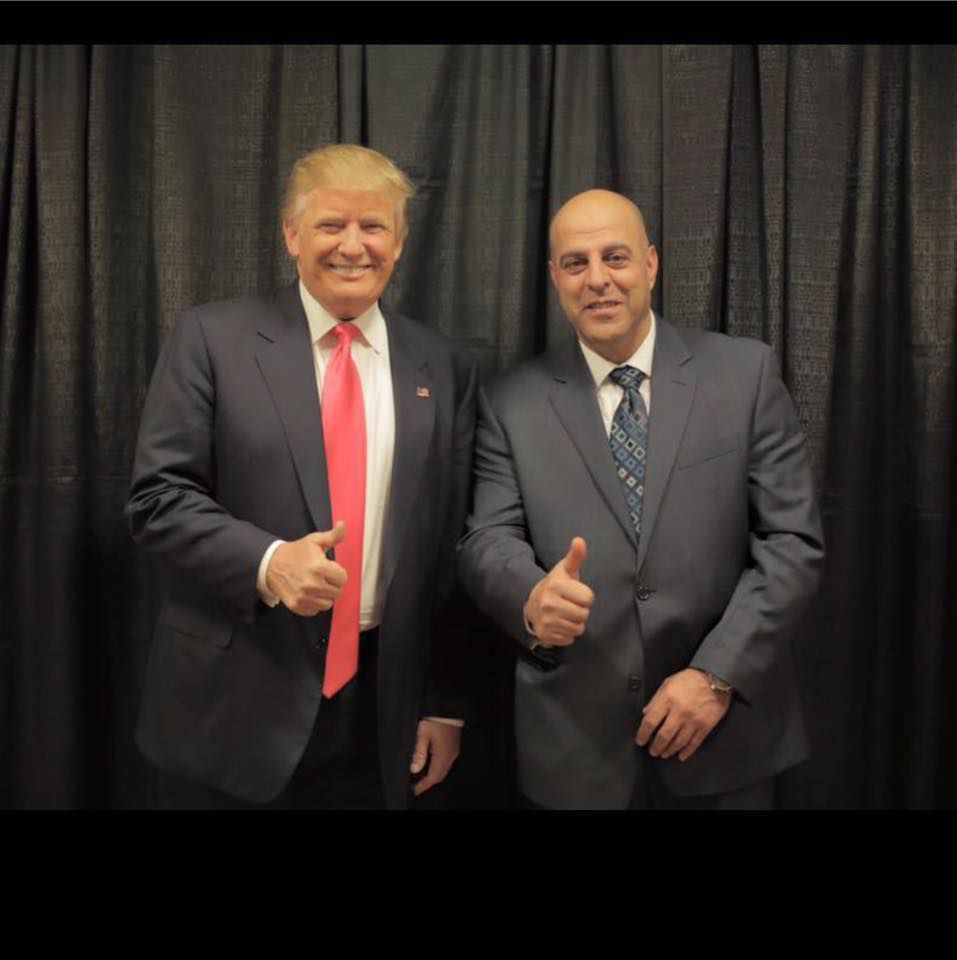 File photo: Amer Fakhoury ( R) , former South Lebanon Army official who allegedly served as a senior warden at the notorious Khiam detention center during the Israeli occupation of southern Lebanon in the 1980s and 1990s and who fled to the US after Israel pulled out of south Lebanon is accused of being the “Butcher of Khiam.” He is pictured here with US president Trump
Share:

President Donald Trump announced Thursday that Lebanese-American Amer Fakhoury has been released from prison, describing the development as “very big.”

“Today we are bringing home another American citizen, big thing, very big,” Trump said at the beginning of a coronavirus task force briefing.

Trump also said that the US is working hard to secure the release of American journalist Austin Tice, who disappeared in Syria in 2012.

The President has made the release of American hostages overseas a priority, bringing detained US citizens home from Afghanistan, North Korea, Egypt, Iran and Turkey.

The elevation of Robert O’Brien from Trump’s envoy for hostage negotiations to his national security adviser in September 2019 has made the issue even more prominent.

As the coronavirus pandemic sweeps the world, the Trump administration now appears to be making a concerted press to bring more detained Americans home, with US officials calling on Venezuela, Syria and Iran to comply.

Trump said Thursday that Fakhoury is already on his way back to the US.

The Dover, New Hampshire, resident, who is battling late-stage cancer, had been imprisoned in Lebanon since September 2019 on decades-old murder and torture charges.

“They worked with us and we are very proud of his family… and they are thrilled,” he said.

Pompeo said Fakhoury’s release “comes as a relief to those who have followed the case with grave concern. We are relieved to be able to welcome him back home.”

Fakhoury’s release on Tuesday drew condemnation in Lebanon, where his work running the Khiam prison during Israel’s occupation of the country in the early 1980s, earned him the nickname “the butcher of Khiam.”

The Lebanese militant group and political party Hezbollah condemned Fakhoury’s release on Tuesday and blamed it on US pressure.

“Since the first day of the arrest of the criminal and murderous agent… American pressure and threats began secretly and publicly to compel Lebanon to release him, with all the crimes attributed to him and with all his black and bloody past proven, and it seems that American pressure has unfortunately bore fruit today,” the Hezbollah statement said.

Trump also said that the US is “working very hard with Syria” to free Tice, adding that they have recently sent a letter to Syria about the former Marine who was working as a freelance journalist when he was kidnapped.

The Fakhoury family said in a statement that it is “hard to put into words how grateful and relieved we are to finally be returning to the United States with Amer.

We have been through a nightmare that we would never wish on anyone.” They added that, “first and foremost,” they wanted to thank their senator, Jeanne Shaheen of New Hampshire, who has pursued Fakhoury’s release for years.

“Senator Shaheen pursued every means possible to secure Amer’s freedom—this would not have happened without her.

Tice’s case has drawn renewed interest from the President recently, with the New York Times reporting that the CIA has boosted its efforts to find out where he is being held and why the Assad regime has refused to negotiate his release.

“We’re doing the best we can, so Syria, please work with us. We would appreciate you letting him out,” he said.

Also Thursday, Pompeo said that White, the US citizen detained in Iran since 2018, is now in the care of the Swiss embassy in Iran. “His release on humanitarian grounds was conditioned upon him staying in Iran. Michael is now in the custody of the Swiss embassy and will undergo medical testing and evaluation,” Pompeo said. “The United States will continue to work for Michael’s full release as well as the release of all wrongfully detained Americans in Iran.”

White’s family released a statement saying they are “grateful the Iranian government took this interim humanitarian step.” They urged Tehran to release Michael, a cancer patient, “unconditionally, so that he can return to the United States to receive the advanced medical care he needs.”

State Department special envoy for Iran Brian Hook said the US has “been working on a daily basis through the Swiss to try to get the release of the Americans who were wrongly detained in Iran” either on medical furlough or full release.

“We recognize the urgency of the situation. We want these Americans to not be at risk of from (coronavirus),” Hook said on a call with reporters. “The fact that the regime has released so many people from jail is an admission by the regime of their concern. So we hope that that gets applied to the Americans who are still in prison.”

Hook said Michael White was released from Mashhad into Swiss custody and then was flown to Tehran, where “he will be evaluated by doctors that the Swiss work with in Tehran.”

Hook told reporters he had spoken to White and said he was “in very good spirits but he has some pre-existing health conditions that are going to require some attention.”

“He was in very good spirits and very grateful to the President and to the secretary for all of their efforts to get him to this point,” Hook said.

Asked by CNN if any outside interlocutors had been used to help secure White’s release, Hook said “no outside interlocutors played a role.” However, the spokesperson for White’s family said “this came together as the result of great work by [the Special Presidential Envoy for Hostage Affairs], the Swiss and our NGO partners like (the) Richardson Center,” the non-profit run by former Ne Mexico Gov. Bill Richardson that has has secured the release of hostages the world over.

On Thursday, he pushed again. “We again call on the Iranian government to immediately release on humanitarian grounds Morad Tahbaz, Baquer Namazi, and Siamak Namazi,” he said in his statement.

“We also ask the regime to honor the commitment it made to work with the United States for the return of Robert Levinson,” the longest-held American prisoner in Iran.

Also Thursday, he cited the threat from the novel coronavirus as he called on Venezuela to release five American citizens and one US resident who work for the energy company Citgo “who are currently languishing in the notorious Helicoide prison in Caracas.”

Fakhoury airlifted from US embassy

A US Air Force Bell V-22 Osprey Helicopter landed at the US embassy just north of Beirut , Lebanon and minutes later it airlifted Fakhoury .

Some very interesting #USAF movement on the coast of #Lebanon today, and activity in Lebanon.

Lebanese media reported last December that U.S. diplomat David Hale reportedly discussed during his visit to Lebanon with caretaker foreign Minister Jebran Bassil the possibility of a “prisoner swap” to free Fakhoury in return for freeing Lebanese businessman Qassem Tajeddine a Hezbollah “financier” who was  arrested by the United States of America on charges of financing Hezbollah.

Tajeddine was arrested in 2017 in Morocco. The US says he provided millions of dollars to Hezbollah.