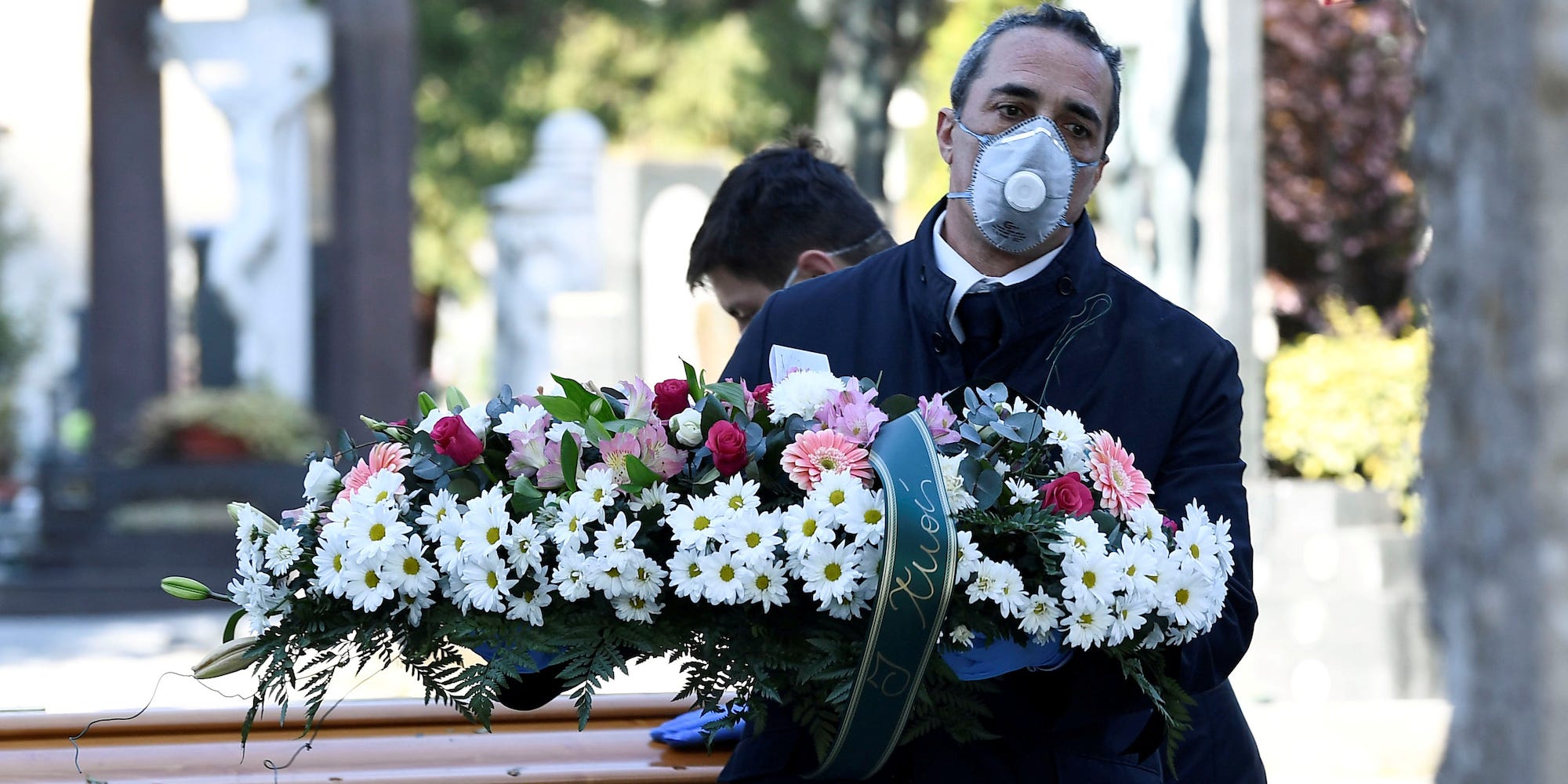 Cemetery workers and funeral-agency workers in protective masks in Bergamo, Italy, on Monday. Italy, now the country being hardest hit by the outbreak, had reported more than 3400 deaths and more than 41,000 cases as of Thursday. Flavio Lo Scalzo/Reuters
Share:

ROME – Italy marked a grim milestone Thursday as its number of deaths from the rampaging global coronavirus outbreak surpassed those in China.

The country’s death toll hit 3,405 as of Thursday, an increase of 427 compared to Wednesday, according to Italy’s Civil Protection Department.

Italy has been staggering under the effects of the pandemic for weeks. Hospitals and even some morgues in the hard-hit northern Italian city of Milan are stretched beyond capacity.

Health officials are searching for new ways to get more doctors in the field, ranging from calling recent retirees back to work to rushing as many as 10,000 soon-to-graduate students into low-leverage situations before they finish with exams as a way to free up more experienced colleagues.

The entire population of more than 60 million is under lockdown, allowed to leave home only for “essential” activities like visits to grocery stores or pharmacies. Police and the military are roaming the streets on the lookout for people breaking quarantine. Everything from open restaurants and coffee bars to weddings and funerals is prohibited.

‘It’s so frightening. I keep worrying they aren’t telling us everything. If they are, then why do so many people keep dying?” said Rome native Annalisa De Crescenzo, 30, a legal secretary. “I feel fine. I keep telling myself that so I’ll stay calm. But I’m worried.”

On Wednesday, Prime Minister Giuseppe Conte said that the lockdown measures would be extended beyond their original April 3 deadline, and government officials said additional steps could be taken – such as limiting hours supermarkets can be open and closing urban parks – if current measures prove inadequate.

“The death toll is rising from people who were infected before the national lockdown” on March 9, Angelo Borrelli, head of Italy’s Civil Protection Department, said on Wednesday, when the death toll jumped by 475, the highest one-day total so far in Italy. He was referencing the estimated 12- to 14-day incubation period for the virus.

“We still believe that once we are 14 days out from the lockdown we will begin to see a significant drop in the death toll,” Borrelli said.

One factor in the high death toll so far is the high median age in Italy, which is 47 years, compared to 37 in China and 38 in the U.S. Stated as a percentage of the total population, Italy has more people over the age of 80, 90, or 100 than any other major industrialized country except Japan. With the average age of a COVID-19 victim in Italy over 80, that is a factor, with most of the elderly victims already suffering from serious underlying medical conditions such as cancer, diabetes, or hypertension.

As of Thursday, China’s total death toll from the coronavirus was 3,245. But the total number of people infected by the virus in China is more than twice the number in Italy and China’s population is nearly 25 orders of magnitude larger than Italy’s population of 61 million people.

The figures are a stark illustration of how the virus has swept through communities at breakneck speed, upending daily routines, wiping billions of dollars off of stock markets and threatening to usher in the most serious economic recession in decades.

A number of factors are being blamed for why the virus has taken hold in Italy with such ferocity, in addition to its large elderly population. They include an utterly overwhelmed health care system and a failure to quickly impose a full national lockdown on its citizens.

Italian authorities began enforcing their national lockdown on March 9, 21 days after the point where community transmission, defined as more than 100 cases, had taken hold, according to World Health Organization data analyzed by USA TODAY.

The restrictions were tightened further on March 12.