Coronavirus for Lebanon is a crisis in a crisis 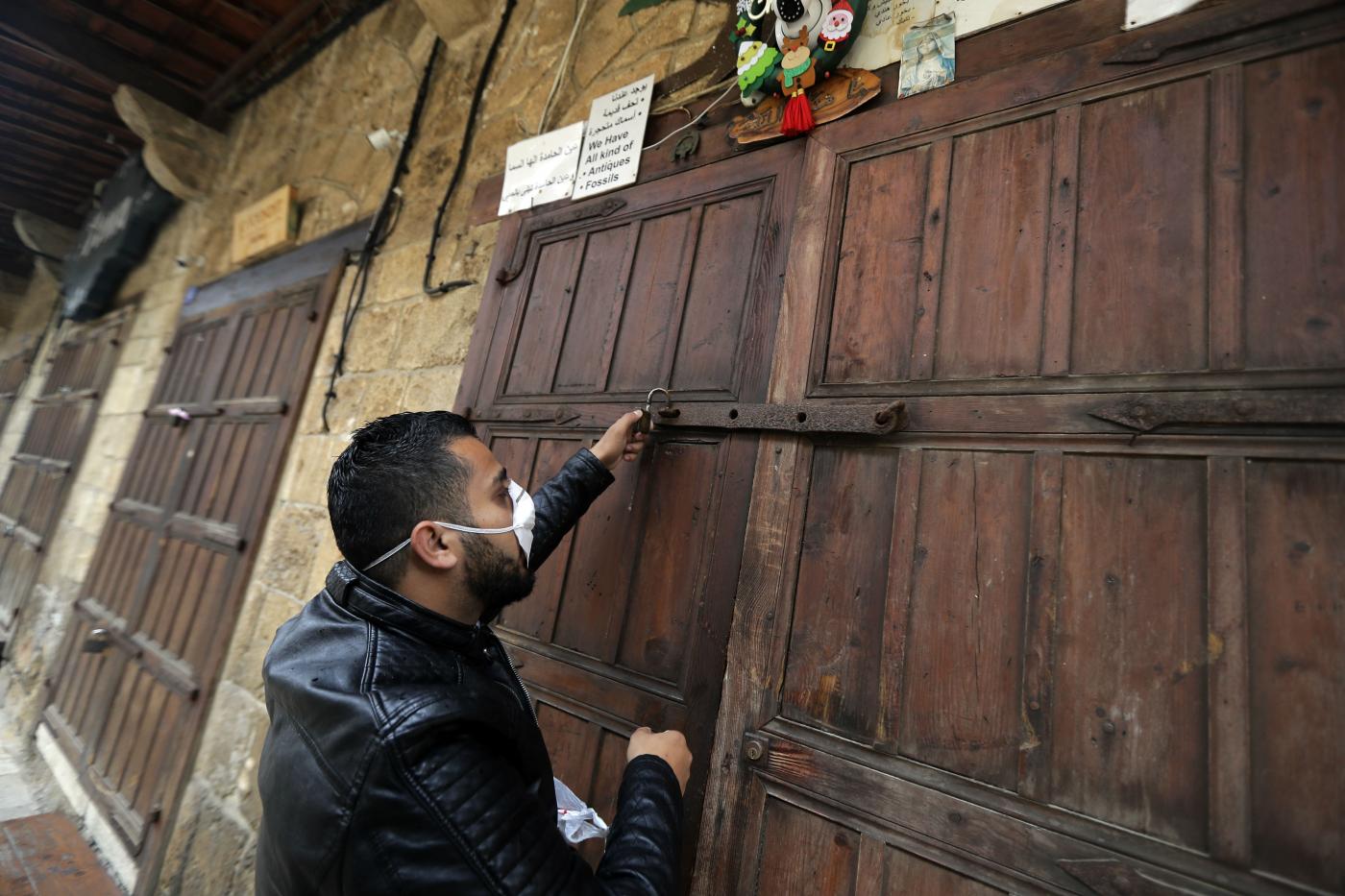 As Noor poured hot coffee into a mug in a Beirut cafe earlier this week, life just about seemed business as usual. The only problem was the coffee shop was half empty.

At the time, Lebanon’s tourism ministry had ordered gyms, bars, nightclubs and music venues to close following rapid developments with Lebanon’s coronavirusoutbreak, but restaurants and cafes were off the hook.

Rumours swirled that they would be next, with the barista’s cafe forced to shutter.

“It would be positive for public health, but bad for business in the middle of the country’s economic crisis,” she told MEE, likening the situation to businesses closing during mass popular protests late last year.

“At least during the revolution, it was because people were fighting for something good, for a better economy,” she said.

Two days later, following Lebanon’s second coronavirus-related death, the tourism ministry and restaurant syndicate announced that all food and beverage establishments would close across the country.

The education ministry, meanwhile, continues to extend school closures by the week.

Beirut now resembles a ghost town. Its cacophonous and jam-packed streets have become empty and noiseless, as more people self-quarantine and avoid the risk if being infected – if they can afford to.

Lebanon’s health ministry has registered 93 cases and three deaths, a situation that seems to be getting out of hand after Health Minister Hamad Hassan said on 6 March that the virus was no longer contained due to a “miscalculation” from two unsuspected cases: a man who travelled to Lebanon from Egypt, and a woman who flew in from the United Kingdom.

Meanwhile, more and more of Lebanon’s population of around four million are moving into self-isolation and shutting up shop, a cruel blow to an already moribund economy.

“It is no longer a secret that the sector is going through its worst days,” the syndicate’s statement read as it announced food establishment closures, citing weak revenue and purchasing power, and a weakened “morale”. It described the coronavirus as a “knockout blow”.

Nearly 800 restaurants and other food establishments in Lebanon had already shut down between September 2019 and February 2020 alone, and closures are expected to surge with further economic decline.

Economist and American University of Beirut Professor Jad Chaaban said a viral outbreak in Lebanon would spell disaster for its weak economy, likening its impact to that of a war.

“The economy has been shrinking for several months now due to economic and monetary mismanagement,” Chaaban told Middle East Eye, warning that further revenue cuts would inevitably lead to salaries and staff numbers being slashed.

Before anyone had even heard of coronavirus, Lebanon was facing its worst economic crisis since the 15-year civil war ended in 1990.

With a weakened local currency and a significant shortage of US dollars, it is one of the world’s most indebted countries and defaulted on its loans for the first time earlier this month.

Prime Minister Hasan Diab, citing the World Bank, believes that over 40 percent of the population could soon live below the poverty line.

Grocery stores and pharmacies remain open, but all is not normal.

Corner shops are raising prices to make up for lost revenue, while one shopkeeper has put up signs urging people to maintain their distance: “No handshaking and no kissing.”

Not all restaurants and takeouts have followed regulations yet.

While photos of Lebanon’s iconic Barbar franchise shuttering for the first time in decades have been prominent on local social media feeds, some outlets are insisting on staying open to brave the storm.

Occasionally the situation boils over. Outside Geitaoui Pharmacy in east Beirut, two men broke into a fight on Friday before others joined in. Residents said it was related to rumours swirling about some families being infected with the virus.

Despite the Lebanese government and various syndicates calling for and imposing closures, the country is not officially under a state of emergency. Most people are still expected to go to work.

But this has angered many citizens, who have been calling for further measures to take place since late February.

“For the past two weeks, I have been doing nothing but going to work and going home,” Rayane Mousallem, a sports journalist residing in the Beirut suburb of Hazmieh, told MEE.

Mousallem said the situation has left her “fuming.” She feels the government has not taken the appropriate precautions, and that many people are not taking the situation as seriously as they should.

“Of course, shutting schools, university, gyms, pubs, clubs [and] cinemas… is good, but to manage the virus containment the whole country should be put in lockdown,” she said.

“Otherwise, we’re on the way to become like Italy.”

She is not alone. Mousallem is among many pushing a trending hashtag on Twitter calling for an official state of emergency.

Lebanese media have followed suit, with local television station Al-Jadeed calling for people to stay at home.  In a bizarre move, television station MTV announced a state of emergency, much to the chagrin of Information Minister Manal Abdel Samad.

But it’s not just a lack of trust in the Lebanese government to handle the coronavirus outbreak; there is also a serious concern about its economic capacity.

Lebanon is drowning in $90bn debt and has been trying to reduce its budget by cutting government spending by any means necessary.

This year, it has cut health care expenditure by 7 percent. The government has also struggled to reimburse public and private health facilities, as well as prop up its threadbare social security programme, causing a fear in shortages of vital medicines and medical equipment.

Chaaban says that Lebanon’s limited public sector spending on social welfare, “decades of austerity,” and mismanagement of public funds have hampered the state’s ability to take on coronavirus.

“Our health care services are not well-equipped and are under-funded,” he said, adding that there is an “over-reliance on a for-profit hospitals sector”.

He believes that private hospitals fear losing revenue if they take on the issue, “as patients would try to avoid hospitals treating coronavirus victims”.

Cases have been quarantined and treated at the public Rafic Hariri University Hospital, which has 140 beds allocated for coronavirus patients in an isolated setting.

However, Hassan said on Thursday that eight other public hospitals across the country will increase capacity for patients, as well as some private hospitals, totalling to 12,555 beds.

Health professionals have also been impacted by the uncertainty of the situation, some admitting that there is a sense of “panic” among them.

“The medical teams are worried,” a physician at a private Beirut hospital told MEE, asking to remain anonymous.

“You have to have an index of suspicion, but you can’t treat every case as a panic case if they just cough or sneeze.”

Testing is limited. Rafic Hariri University Hospital offers free testing for cases that have physical coronavirus symptoms, but is held back by limited resources.

Whatever the efficacy of the measures taken by the government of Hassan Diab, who took over as prime minister on 21 January this year, a sense of anxiety continues to loom over Lebanon during the coronavirus outbreak, at a time of lack of trust and severe economic decline.