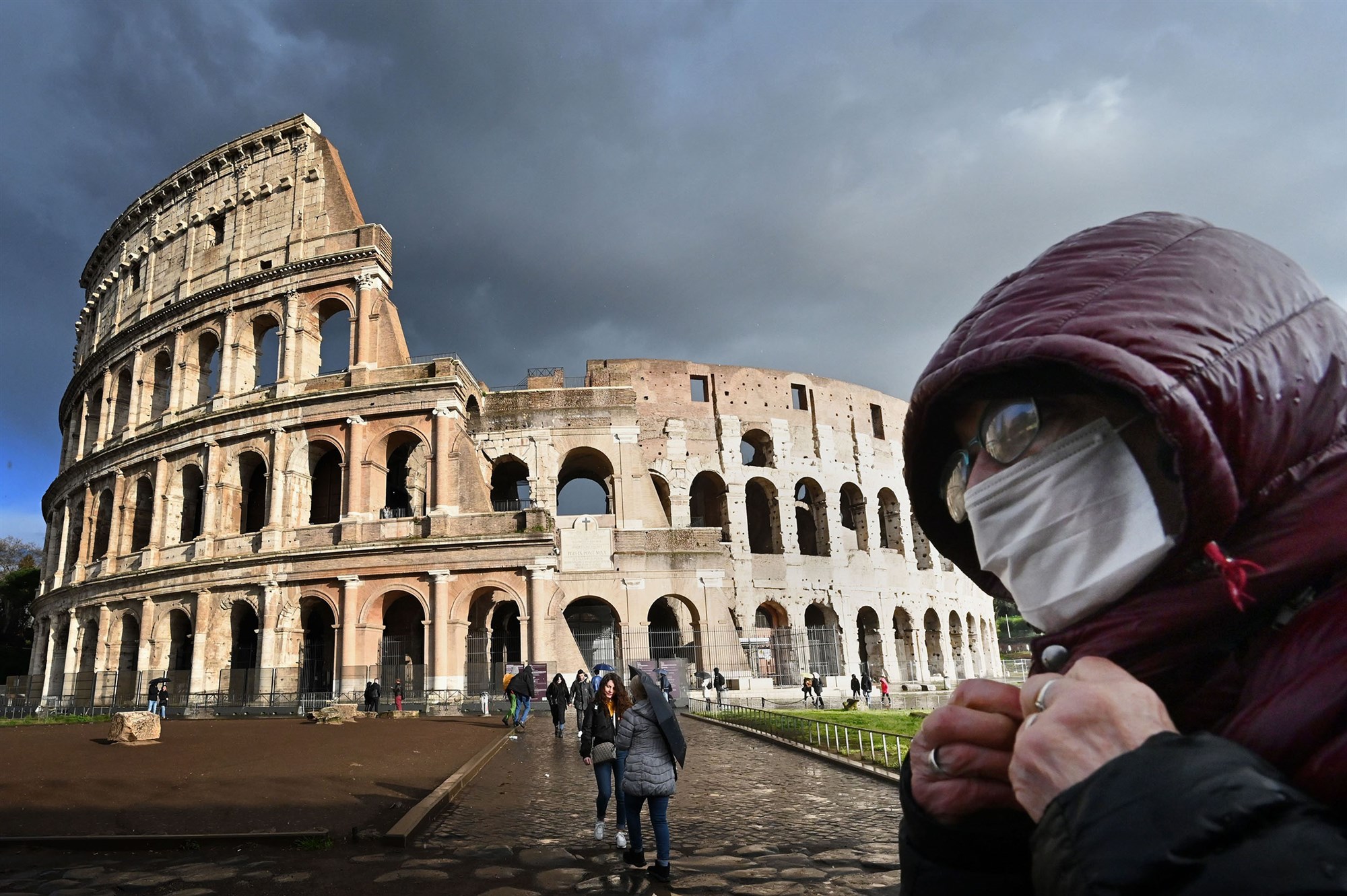 Coronavirus has Italy on lockdown. Is that what the rest of of the world has to look forward to?
Share:

The death toll from coronavirus in Italy has jumped in the last 24 hours by 189 to 1,016, a rise of 23 percent, the country’s Civil Protection Agency said on Thursday.

The World Health Organization (WHO) declared the outbreak a pandemic as Italy tightened its strict quarantine and the United States imposed a ban on flights to Europe.

More than 4,600 people have died and over 126,000 have been infected globally, according to the WHO. About 68,000 victims have recovered, according to Johns Hopkins University, which is tracking the virus.

Here are the latest updates:

On Thursday, Portugal’s government ordered the shutdown all schools nationwide starting on Monday to contain the coronavirus epidemic until further evaluation on April 9, Prime Minister Antonio Costa said in a televised address.

He also said cruise-ship passengers would not be allowed to disembark except those residing in Portugal. Nightclubs in the country will be shut, and there will be capacity restrictions on entry to shopping malls and restaurants.

Belgium’s government ordered schools, cafes, restaurants and some shops to close due to the coronavirus, following decisions by France and other European countries to limit all but essential activities.

The measures take effect from Friday at midnight central European time and run until April 3, although schools are set to be shut for five weeks, including during the Easter holidays, Belgium’s caretaker Prime Minister Sophie Wilmes told a news conference.

“There is no lockdown,” Wilmes told reporters, stressing that supermarkets and pharmacies would remain open and other shops would only be required to close on weekends. “We want to avoid the Italian situation and avoid lockdowns.”

21:45 GMT – Bulgaria to declare state of emergency over coronavirus

Bulgaria plans to declare a state of emergency to curb the spread of the coronavirus, Prime Minister Boyko Borissov said late on Thursday as the country’s confirmed cases rose sharply to 23.

The Balkan country confirmed its first death of a patient diagnosed with the virus on Wednesday, and on Thursday, the number of confirmed cases jumped to 23 from seven.

“The government will ask the Parliament to declare a state of emergency, which will allow the closing of schools, kindergartens and universities,” Borissov said after an extraordinary government meeting.

Costa Rica has ordered all university classes suspended due the risk of the spread of coronavirus, while other schools deemed to be at risk will also be closed for two weeks, officials said on Thursday.

Walt Disney Co will close its Disneyland and California Adventure theme parks in Anaheim, California starting on Saturday amid the global outbreak of coronavirus, a company spokesperson said in a statement on Thursday.

No cases of COVID-19, the disease caused by the novel coronavirus, have been reported at the parks, the statement said.

National Collegiate Athletic Association (NCAA) in the United States has cancelled its “March Madness” Division I men’s and women’s basketball tournaments, citing concerns over the coronavirus pandemic that has hit sporting events across the world.

“This decision is based on the evolving COVID-19 public health threat, our ability to ensure the events do not contribute to spread of the pandemic, and the impracticality of hosting such events,” the NCAA said in a written statement.

The Qatar government announced a series of regulatory measures to prevent the spread of the coronavirus, including closure of theatres and gyms, the Government Communications Office announced in a statement.

“The Ministry of Public Health calls upon all citizens and residents to avoid crowded places and postpone holding social gatherings for the time being, for their own wellbeing and that of the community,” the statement said.

19:08 GMT – Team from coronavirus epicentre to leave Spain to return to Wuhan

Wuhan Zall, the soccer team from the epicentre of the coronavirus, are to leave their training camp in the south of Spain to return to China, with their coach saying they are more at risk in Europe than in their home city.

19:47 GMT – Up to 150 million Americans could get coronavirus: US projection

The physician for the United States Congress expects between 70 to 150 million people in the country to eventually get infected with the novel coronavirus, a lawmaker said.

Congresswoman Rashida Tlaib made the remarks during a hearing of the House of Representatives with members of the president’s coronavirus task force, confirming what was reported earlier by US media outlets including Axios and NBC News.

“Congress’s attending physician told the Senate that he expects between 70 to 150 million people to eventually contract the coronavirus in the United States,” Tlaib said.

India reported its first coronavirus death as authorities ordered schools, theatres and cinemas closed in New Delhi for the rest of the month in a bid to keep the pandemic at bay.

The government in the southern state of Karnataka said that a 76-year-old man who died on Tuesday had been confirmed as a coronavirus carrier and that it was trying to trace those who had been in contact with him.

A 60-year old woman had died in a hospital, the ministry said in a statement.

Doctors working at a makeshift migrant and refugee encampment along the US-Mexico border are treating the potential arrival of the novel coronavirus, now declared a worldwide pandemic, as a certainty, not a possibility.

A doctor at the camp in Matamoros, Mexico, said when COVID-19 arrives here, it will be “catastrophic”, and people will die.

19:10 GMT – Putin may extend term over ‘threats to Russia’, coronavirus

President Vladimir Putin of Russia approved legislation allowing him to stay in power beyond 2024 citing global instability and threats against Russia, including the new coronavirus, the Kremlin said.

During a rare and unscheduled appearance in the Parliament on Tuesday, Putin stunned both the general public and the establishment by agreeing to a last-minute proposal to reset his constitutional term-limit clock to zero.

Donovan Mitchell of the Utah Jazz confirmed that he has tested positive for the coronavirus, publicly saying that he is personally dealing with the pandemic that has temporarily shut down the NBA and other major sports leagues.

Mitchell is one of two NBA players to have tested positive: The other is his Jazz teammate Rudy Gobert, who was the first NBA player to test positive but has not publicly confirmed his diagnosis.

19:00 GMT – In contrast to Trump, Biden pledges to ‘lead with science’

Democratic presidential candidate Joe Biden called for a sweeping national response to the coronavirus outbreak, chiding President Donald Trump for a response he said was woefully insufficient and warning that the widening public health crisis should not be viewed through a lens of politics.

“This administration has left us woefully unprepared for the exact crisis we now face,” Biden said in a speech delivered from his hometown of Wilmington, Delaware, and tailored to draw sharp contrasts between the former vice president and the Republican incumbent he hopes to topple this fall.

The coronavirus COVID-19 is affecting 127 countries and territories around the world and 1 international conveyance (the Diamond Princess cruise ship harbored in Yokohama, Japan). The day is reset after midnight GMT+0. Search:

Highlighted in green= all cases have recovered from the infection Highlighted in grey= all cases have had an outcome (there are no active cases)
The “New” columns for China display the previous day changes (as China reports after the day is over). For all other countries, the “New” columns display the changes for the current day while still in progress.