IMF deal seen as only way out for Lebanon. No viable plan B 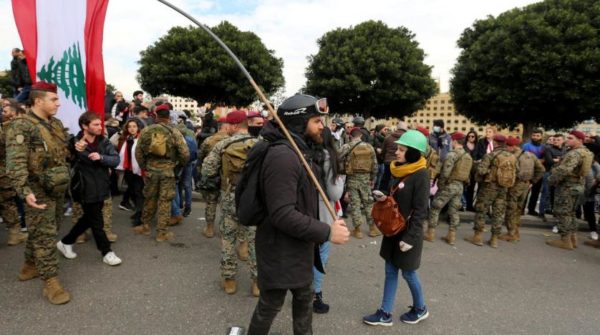 A demonstrator holds the Lebanese flag during a protest seeking to prevent MPs and officials from reaching the parliament for a vote of confidence, in Beirut, Lebanon February 11, 2020. (Reuters)
Share:

BEIRUT- The Lebanese government must swallow its misgivings and reach a rescue deal with the International Monetary Fund (IMF) or risk economic implosion and further turmoil, economists, diplomats and politicians said.

Privately, some government officials acknowledge that an IMF bailout is the most logical solution to Lebanon’s economic crisis, according to a source familiar with ongoing discussions.

But to get such a rescue program in place, the new government would have to overcome the objections of Hezbollah, the powerful Iranian-backed power broker in Prime Minister Hassan Diab’s cabinet and its Christian and Shi’ite allies, who are concerned about the austerity measures an IMF rescue would involve.

As Lebanon’s financial crisis drags on and government revenues dwindle, the bill to rescue the country is rising. Former economy minister and ex-vice central bank governor Nasser Saidi estimates the economy will need $30 billion, and an additional $25 billion to recapitalise a banking system in hock to the state.

“Lebanon needs external liquidity both for the balance of payments but also for the government,” Saidi said. “That’s why the external package and the IMF reform program which comes with all the associated reforms which we need is so necessary”.

A $1.2 billion payment on a Eurobond is falling due on March 9 and even though Lebanon is widely expected to restructure its foreign-currency-denominated debt that is unlikely to be enough to deal with the total debt burden, economists and analysts say.

The IMF has estimated that Lebanon’s public debt would reach 155% of gross domestic product by the end of 2019, one of the biggest debt burdens in the world.

Any move to restructure will further pressurise local banks, which after years of funneling their deposits to the state, have an exposure to Lebanese sovereign debt that stands at almost twice their capital base.

The government could look at forcing depositors to take losses as another way to alleviate its burden. But the Lebanese banking system has been built on attracting deposits from overseas and grabbing such cash would make it more difficult for Lebanon to attract hard currency in future.

The banks have already seen deposits drain away, despite effectively imposing capital controls on ordinary savers, and urgently need to restock their balance sheets.

But with inflation shooting up to 30%, the pound depreciating by 40% since October and the number of jobless rising every day, analysts say only a full IMF deal will unlock the tens of billions of dollars Lebanon now needs.

“It’s likely Hezbollah will eventually accept an IMF plan because they have no other option. The alternative will be serious political and economic crises”.

The government said it was working its own rescue plan without resorting to an IMF program and was only seeking IMF technical assistance.

A senior Hezbollah official said that terms required by any IMF bailout would spark social unrest.

“The position is not towards the Fund as an international financial institution but on the terms offered to Lebanon, because they will lead to a popular revolution,” Hezbollah MP Hassan Fadallah told Reuters.

“Our position is against this type of program and not against the Fund as an organization.”

The IMF declined to comment, referring instead to a statement from last week when it said its staff had held five days of “very informative and productive” talks with Lebanese authorities, and stood ready to provide further technical advice as the Lebanese government formulated its economic reform plans.

Some analysts argue Hezbollah will have to relent because its Shi’ite constituency, especially those who pad the public payroll, will be among the worst hit by economic collapse – and because the IMF is the only alternative to that risky outcome.

“Unless the right, responsible decisions are made, there’s a big collapse coming and it’s unknown what will come out of it: will it be the same Lebanon or a different Lebanon?,” said Alain Aoun, a senior member of the Christian Free Patriotic Movement party, a Hezbollah ally.

“The price for the Lebanese system will be very high, bigger than just a change of government,” said Aoun, adding that so far no party had presented a credible alternative to an IMF program.

Hezbollah’s Fadallah did not respond to a question about an IMF program being the only way to avoid economic disaster.

Corruption and bad governance are seen as root causes of Lebanon’s problems and the crisis, which has seen street protests against the ruling elite, represents the most serious threat to the country’s stability since the 1975-1990 civil war.

An attempt by the previous government to raise revenues by taxing WhatsApp calls ignited mass demonstrations that eventually prompted it to resign. An IMF bailout, which would require structural reforms, could however unlock funds from other sources.

European donors led by France, which has led previous efforts to ensure Lebanon’s solvency and stability, have held up a $11 billion package of loans for infrastructure agreed in 2018 because there has been no serious effort to reform the economy.

Western diplomats said they have avoided calling for Lebanon to seek IMF assistance, saying that must be a Lebanese decision but stressed that any Western emergency funding for Lebanon would only come as part of an IMF program.

They said Lebanese officials face an uphill struggle to persuade donors — who have coughed up billions of dollars in aid in the past — to believe in their willingness to implement a reform plan on their own.

“If they don’t think they need the IMF they need to navigate the waters differently but they don’t have a plan B,” said one of the diplomats. “You’re talking to a person who is about to drown”.

NOTHING BUT BAD NEWS

“This government takes over at a time when a lot of very difficult messages have to be delivered,” says Dan Azzi, former chairman and CEO of Standard Chartered Lebanon. “Who’s going to give the speech saying, ‘Oh, half your deposit is gone’ or ‘The Lira has been devalued’ or ‘I need to raise taxes’? The new team has nothing on its plate but bad news.”

To boost liquidity and attract foreign deposits, the Bank of Lebanon instructed all commercial banks to raise their common-equity Tier 1 capital to 20% by June. “We have to avoid bankruptcies at all costs. A lot of banks will probably end up merging,” says Nassib Ghobril, chief economist at Bank Byblos, one of the country’s largest lenders.

There are currently 49 commercial banks registered in Lebanon, but some close observers argue this number could be cut in half with a national consolidation strategy. Diab’s government has also called on the International Monetary Fund, the World Bank and the European Union to step in with a loan package. But foreign donors say they will only help if Lebanon implements a serious reform agenda.

Either way, time is running short. In March, the new government must decide whether to repay a $1.2 billion Eurobond, or default on its debt. Other bonds worth $700 million and $600 million will mature in May and June.

“You either come up with a plan to pay all the bonds—forever—because you want to preserve the country’s credit rating so it can go back to the markets in two or three years and say Lebanon always pays its debts,” says Azzi, “or, if we are going to default, we might as well do it now. Not pay even in March. There is no halfway.”