Hezbollah adds coronavirus to its list of imports from Iran 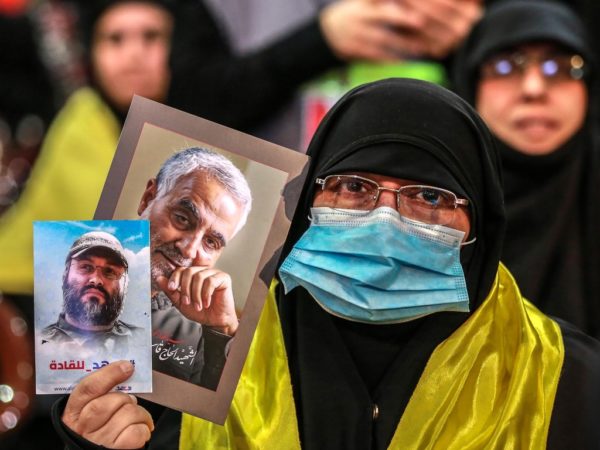 A Hezbollah supporter wears a medical mask while holding a photo of assassinated Iranian general Qassem Suleimani during a Martyrs’ Day rally in Beirut on February 16. Nabil Mounzer / EPA
Share:

Lebanon’s dysfunction and ongoing disintegration are largely the fault of the country’s political class, which has looted its resources and stolen its future. Lebanon is in grave danger, with Iran and Hezbollah directly implicated, as it faces political siege, economic collapse and now a viral epidemic.

A troika system, in which Lebanon’s three high offices are shared between religious sects, governs in Beirut. This means that responsibility for political-economic and health crises alike falls on the shoulders of President Michel Aoun, Prime Minister Hassan Diab and parliamentary speaker Nabih Berri to confront Hezbollah – the militant party controlling parliament.

But instead of acting on Lebanon’s issues, the leadership is engaged in stalling and horse-trading. If this continues, it must be held accountable at home and internationally. The ongoing shirking of moral and constitutional responsibilities puts the Lebanese people at mortal risk.

At present, Hezbollah’s continued rejection of assistance from the International Monetary Fund to bail Lebanon out of its ongoing financial crisis risks causing economic catastrophe. Moreover, the United States has already started preparing new sanctions on Hezbollah allies and associates under the Magnitsky Act. The American law has both security and human-rights dimensions, and empowers US courts with universal jurisdiction to prosecute those involved in serious violations or corruption by freezing assets, imposing travel bans and compelling governments to cooperate on penalty of sanctions.

Europe, for its part, is coddling the Lebanese government by implying through diplomatic channels that EU policies diverge from American ones. This is misleading, given that European leaders will find it difficult to provide any assistance to the Hezbollah – backed government in Beirut, without American consent.

Instead, Lebanon needs the international community to support a bold position against Hezbollah, as well as clarity from the party on its organisational relationship with Iran – including overlaps within its ranks between its own militants and personnel from Iran’s Islamic Revolutionary Guard Corps, particularly the latter’s elite Quds Force.

These murky political and militant links are not only threatening Lebanon’s economy, but also its people’s health. Of course, one first hopes that Iran will be able to contain the epidemic there for the sake of Iranians. But in Lebanon, the performance of the health minister Mohammad Hassan, who is affiliated to Hezbollah, has been dismal and dangerous.

All over the Middle East, countries are endeavouring to contain coronavirus by halting flights from Iran – by far the worst-hit country in the region. Mr Hassan and the Hezbollah government are declining to do so, leaving all Lebanese people heavily exposed.

It falls on all three of Lebanon’s top leaders to fully disclose the coronavirus-related risks being imposed on the people, and to be transparent about the virus’s spread within Lebanese borders. It is widely suspected that Iran is putting itself on a path to self-destruction by covering up the real number of cases. Lebanon cannot afford to do the same.

Hezbollah has already imported a failing revolution from Iran to Lebanon because of its misplaced loyalty to Tehran. It must not allow the import of a viral epidemic on that account as well.

Furthermore, a deepening of Lebanon’s economic crisis will only weaken the ability of its medical sector to fight coronavirus.

Mr Diab and his cabinet would do well to ignore Hezbollah’s opposition to an IMF rescue plan, which has been entrenched further by a “fatwa” from the party’s deputy secretary general, Sheikh Naim Qassem, barring anything more than “technical assistance”. This would earn Mr Diab the confidence of the Lebanese and the global community. It would also render him an ally of the revolution against corruption. But crucially, it would also attract to Lebanon the resources it needs to brace for the other challenges that lie ahead.

It is no secret that US President Donald Trump, Secretary of State Mike Pompeo, and the rest of the US government have resolved that political solutions in Lebanon are the condition for economic ones, and that Hezbollah is the main obstacle standing in the way.

Denial of the necessity to meet these demands has brought Lebanon to the brink. Yet, many in Lebanon – first and foremost those who support the current government – demand that the US and other Western powers “accommodate and adapt” to their country’s “special circumstances” of being open to the West yet beholden to Iran. In reality, what the Lebanese must do, in order to save themselves, is demand that Hezbollah accommodate and adapt.

The interests of Hezbollah’s popular base and constituency are better served by fighting corruption and taking practical steps to receive much-needed global support. The party’s leaders fear IMF assistance because they think it would undermine their power, and because real reforms would lead to Hezbollah’s financial ruin. For this reason, the issue is almost an existential one for Hezbollah.

Hezbollah would be better off re-conceiving itself as a purely Lebanese entity that does not play along with Iran’s regional expansionist policies. Only by engaging with an IMF bailout program, taking a path to real reform and adopting measures that support the healthcare system rather than weaken it will the government in Beirut win the real support of the people it claims to represent.