The state can no longer protect the Lebanese People, PM Diab admits 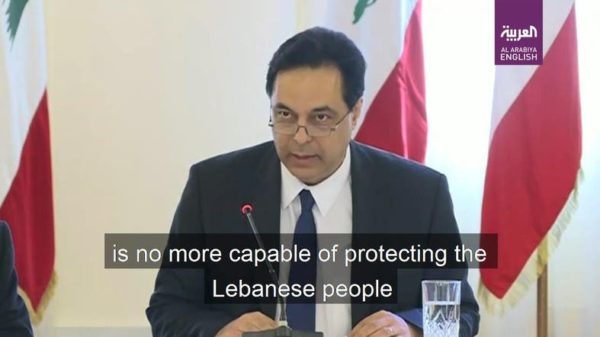 Lebanese Prime Minister Hassan Diab said yesterday that the state is no longer able to protect its citizens as its protection mechanisms is “tied with sectarian restrictions”, Anadolu reported.

Lebanese Prime Minister Hassan Diab on Monday admitted that the state had lost the people’s confidence after months of anti-government protests and an economic meltdown.

In the coming days crisis-hit Lebanon must decide whether to repay $1.2 billion in Eurobonds due on March 9 or, as is widely expected, restructure its debt, Diab said.

The government formed in January inherited a disastrous economic situation and faces an impossible balancing act between the traditional powerbrokers who voted it in and a street that wants all of its ruling elite out.

“To put it frankly, the state, in view of its current situation, is no more capable of protecting the Lebanese people and ensuring a decent life for them,” Diab said.

“To be transparent, I would say that this state has lost Lebanese people’s confidence,” he said in a speech to Lebanon’s honorary consular corps.

He said the government was holding “a ball of fire” but added he was ready to undertake the painful changes needed to rebuild confidence and sound institutions.

“We have no choice but to take the path of the Calvary, whatever the sufferings, because other options are much more dangerous,” Diab said.

Lebanon’s banks are almost alone in arguing against default, a move that would further deplete rock-bottom foreign reserves.

The International Monetary Fund last month dispatched an emergency mission to advise the government but the institution’s role has so far only been technical.

“In the coming days, the government will adopt a crucial decision that is very sensitive and critical. It is still under scrutiny, as it represents a major milestone in shaping the future of Lebanon,” Diab said.