Hezbollah buries its fighters that were killed in Syria’s Idlib 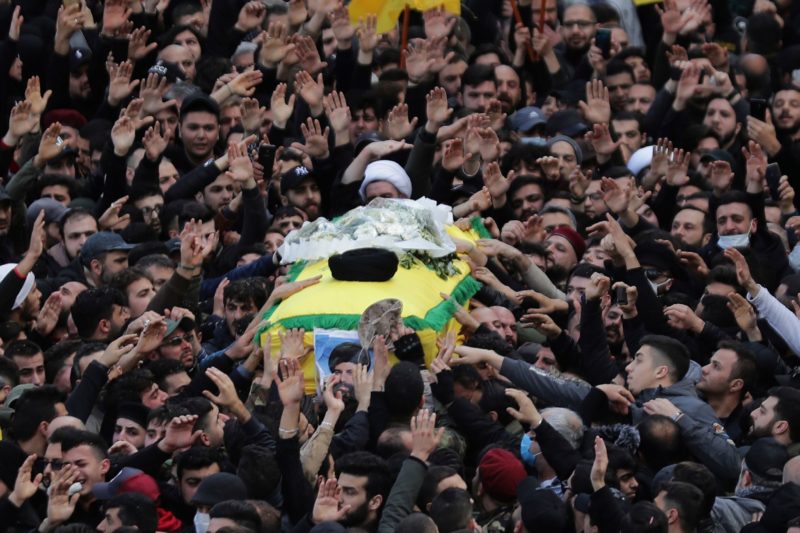 BEIRUT (AP) — Thousands of mourners thronged the coffins of five fighters from the Lebanese militant group Hezbollah, whose funeral was held Sunday in southern Beirut after they were killed in neighboring Syria’s northwestern Idlib region.

The fighters were among at least eight Hezbollah members who died Friday in Turkish attacks amid fierce fighting between Syrian President Bashar Assad’s forces and Turkish troops and allied militiamen. The deaths marked the highest for Hezbollah in Syria in years.

Hezbollah sent thousands of its battle-hardened fighters into Syria in 2012, a year after the country’s conflict began. They’ve been helping Assad’s forces win major battles against rebels, and along with Russian air power have turned the tide of the war. Over the past two years, as the security situation stabilized in many areas, Hezbollah withdrew much of its forces, leaving only a few hundred fighters in several areas across the war-torn country.

The funeral was held in Beirut’s southern district of Ghobeiri. A crowd of a few thousand people — relatives and supporters — walked behind five coffins wrapped in yellow Hezbollah flags amid cries of “Allahu Akbar,” meaning “God is great.”

Heavy gunfire rang out as supporters fired in the air, a traditional sign of mourning. At least five people were seen being taken on stretchers after they fainted, apparently overwhelmed by emotion.

It was not clear exactly how many Hezbollah fighters were killed in Friday’s attacks in Idlib.

The Britain-based Syrian Observatory for Human Rights said 14 Hezbollah fighters were killed Friday afternoon in the village of Talhiyeh when Turkish drones attacked their post as well as others of the Syrian army.

The Observatory’s chief, Rami Abdurrahman, said the 14 Hezbollah fighters included 10 Lebanese citizens and four of other nationalities, including at least one Iranian.

Hezbollah later released a statement listing the names and photos of eight of its fighters, including an Iranian cleric identified as Sayyed Ali Zengani. It gave no details other than saying that they “were martyred while performing their jihadi duties.”

More than a thousand Hezbollah fighters, including several founding members, have been killed in Syria.