Modi is pretending to be Gandhi’s heir. He’s the exact opposite 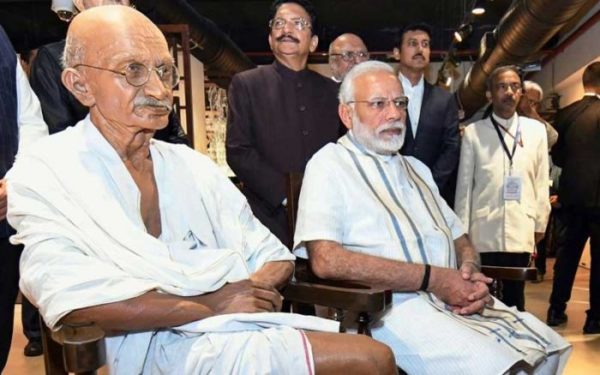 Prime Minister Narendra Modi near the statue of Mahatma Gandhi at newly opened National Museum of Indian Cinema in Mumbai on Jan 19, 2019. (PTI) Modi is pretending to be Gandhi’s heir. He’s the opposite
Share:

When President Donald Trump travels to India on Monday, he will be received not as all past U.S. presidents have been, in New Delhi, but in the state of Gujarat, the birthplace of both Prime Minister Narendra Modi and Mohandas “Mahatma” Gandhi, the father of modern India, who led the country to independence in 1947. The presidential party will be driven six miles to Sabarmati Ashram, a retreat founded by Gandhi, which served as his home and the center of the freedom movement. Trump has excitedly told members of the press that 7 million people are expected to line the streets along the path of his motorcade. (The Indian press predicts a more modest turnout of about 50,000.) The motorcade will end at a cricket stadium where 100,000 people will welcome the president. Modi clearly understands Trump’s love of large, cheering crowds and intends not to disappoint his friend.

It may seem like an odd choice for Modi, a politician nurtured by the RSS, an organization devoted to making India a Hindu nation; the RSS eventually birthed the Bharatiya Janata Party (BJP), Modi’s ruling party. In other words, his intellectual predecessors fought everything that Gandhi and his protege, founding Prime Minister Jawaharlal Nehru, stood for. The RSS despises the pluralistic India of Gandhi’s vision and the Western-educated, liberal Nehru, who sought to protect minority rights and ensure that India became a secular country. But Modi’s political genius has been to rewrite India’s history, depicting his militant Hindu agenda as somehow under Gandhi’s saintly halo, one still revered by the masses, while denying Nehru’s contributions altogether. This is the vision of India he will be showing off to Trump this coming week.

Everywhere he goes, the U.S. president will be greeted by posters of Modi next to Gandhi. They never met – Gandhi was assassinated in 1948, two years before Modi was born – but from the way Modi uses Gandhi, you’d think the older man was his mentor. Modi’s Clean India campaign, launched in 2014, adopted Gandhi’s wire-rimmed glasses as its logo. On Oct. 2, the 150th anniversary of Gandhi’s birth, Modi eulogized the Mahatma in a New York Times op-ed titled “Why India and the World Need Gandhi.” He ordered every overseas Indian mission to commemorate the occasion.

Gandhi’s great-grandson Tushar Gandhi has been understandably horrified by these developments; he said he was nauseated to see the BJP exploiting his great-grandfather’s legacy while tolerating party members who work to rehabilitate the image of Gandhi’s assassin, Nathuram Godse, a right-wing Hindu fanatic who belonged to the RSS. Pragya Thakur, a BJP member of Parliament, keeps referring to Godse as a “patriot”; Hindu nationalists have built statues of him, and a Hindu organization in Madhya Pradesh plans to build a temple in his honor.

Aside from being born in the same state and following a vegetarian diet, Gandhi and Modi have little in common. Modi and the BJP have in fact repudiated much that Gandhi stood for: nonviolence and tolerance. When Modi was the chief minister of Gujarat, from 2001 to 2014 – admired as a successful, pro-business and uncorrupt politician – Hindu mobs under his watch in Godhra massacred nearly 2,000 Muslims over several days in 2002. In the aftermath, little was done to compensate the victims or assure them of their security. The incident attracted international condemnation and was investigated by the government and human rights organizations. There was enough suspicion about Modi’s role that he was denied a U.S. visa until 2014, when he became prime minister.

By contrast, when the subcontinent was partitioned into India and Pakistan after independence in 1947, and riots broke out between Hindus and Muslims, Gandhi and Nehru zigzagged the country, going to affected communities to try to calm people and head off further ethnic violence. Gandhi, a Hindu, spent the night in the homes of Muslims as a symbol of his desire to protect their communities from further harm.

Modi seems to have little interest in actually following in Gandhi’s footsteps. Violent attacks against Muslims by Hindu extremists shot up after Modi’s election. He has done nothing to protect the rights of minorities, especially Muslims, and many for the first time feel unwelcome in their own country. In August 2019, he revoked the limited autonomy granted to Kashmir, India’s only Muslim-majority state, and later amended India’s Citizenship Act to discriminate explicitly against Muslims.

The BJP under Modi now purveys a revisionist view of the Indian independence movement. Its members have criticized many of Nehru’s foreign policy decisions, blaming him among other things for creating the Kashmir problem, mishandling the 1962 war with China and backing China’s claim for a seat on the United Nations Security Council over India’s. In the same way that Trump seems bent on undoing Barack Obama’s signature achievements, Modi seems obsessed with Nehru. He recently invoked Nehru’s name 24 times in a speech to Parliament while justifying the recent decisions, on Kashmir and the Citizenship Act, that inflamed the country. He likes to mock Nehru, sarcastically describing him as “such a big secular person . . . such a great thinker, such a big visionary” who failed to protect Hindu minorities in neighboring countries after partition.

The RSS believes that Nehru’s insistence on making India a secular democracy in the image of the West denied the country the full expression of its Hindu heritage. (Never mind that Nehru, believing that science could create a path out of poverty, established and funded the Indian Institutes of Technology and the medical schools that have spawned the engineers and doctors Modi loves to brag about.) Modi and the RSS believe that their fellow Gujarati Vallabhbhai Patel, a conservative who was the other potential candidate for prime minister at independence, should have been the one to lead India. As Gujarat’s chief minister, Modi erected a colossal monument in Patel’s honor. Ironically called the Statue of Unity, at 597 feet, it is the tallest statue in the world and will be a stop on Trump’s tour.

Ever since he was elected prime minister, Modi has tried to sell a distorted narrative of the history of India and its founders, absconding with the reverence ordinary Indians feel toward Gandhi and delegitimizing their memories of Nehru. As Trump, his guest this coming week, has demonstrated, using the presidency to push “alternative facts” can be a remarkably successful strategy.