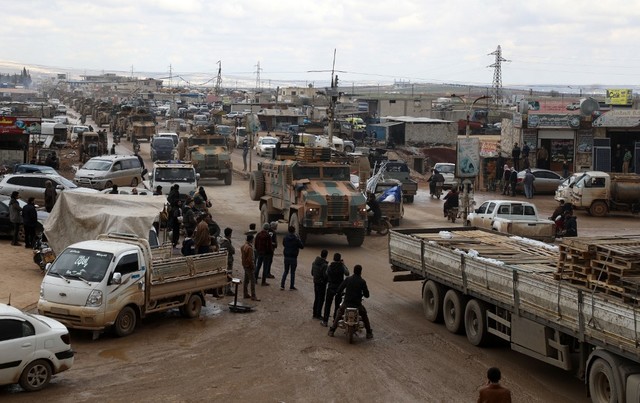 Residents watch as a Turkish military convoy that crossed from the border with Syria, passes through the Syrian rebel-held town of Hazano in Idlib’s northern countryside, on February 22, 2020. – (Photo by AAREF WATAD / AFP)
Share:

A Turkish soldier was killed in Syria’s Idlib region in a bomb attack by Russian-backed government forces, the defense ministry said on Saturday, Turkey’s 16th military death during a month in which talks between Ankara and Moscow have stalled.

Turkish forces retaliated and destroyed 21 “regime targets”, the ministry said, adding the soldier was a tank mechanic who died when transferred to hospital.

Turkey has sent thousands of troops and equipment to northwest Syria, just south of its border, to head off a push in recent weeks by Russia-backed Syrian government forces to retake the rebel-held territory after nine years of war.

Turkey, which already hosts 3.7 million Syrian refugees, says it cannot handle another wave and has closed it borders even while the Syrian offensive and Russian air raids have displaced nearly a million people – mostly women and children – since early December.

The rising number of military casualties, including two on Thursday, could complicate Ankara’s talks with Moscow over a possible deal to halt the fighting.

After delegations from the two sides failed to reach an agreement in the last two weeks, President Tayyip Erdogan has promised to push back Syrian government forces if they press on.

Turkey has “determined our road map” for Syria after calls with the leaders of Russia, Germany and France on Friday, Erdogan told supporters in Izmir on Saturday. “We will announce to all parties that we are at the table.”

Syrian state media, citing a military source, said any breach of Syria’s airspace “will be dealt with as an enemy military target”. Damascus and Ankara – which opposes Syrian President Bashar al-Assad – have agreed Russia could control Idlib airspace.

The United Nations has warned fighting in Idlib could “end in a bloodbath” and called for a ceasefire. The latest Syrian offensive has prompted the biggest civilian exodus in a civil war that has killed an estimated 400,000 Syrians, displaced millions more and left much of the country in ruins.