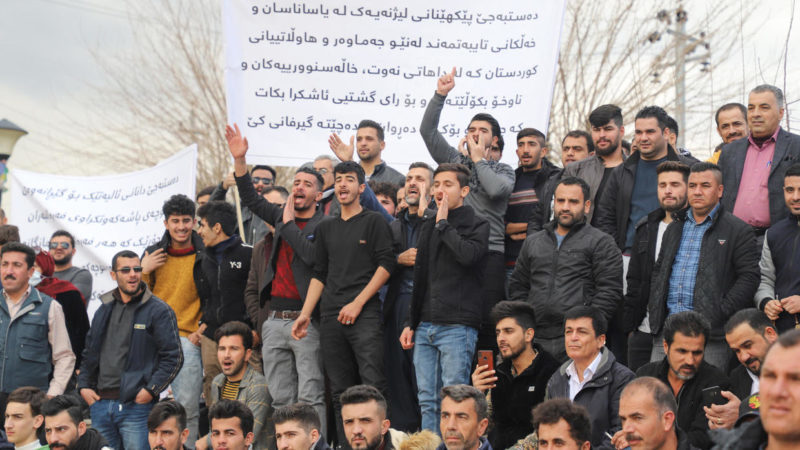 Thousands of Iraqi Kurds Saturday rallied against poor public services and “corruption” among the ruling elite in their autonomous region, an AFP correspondent said.

The rallies led by the New Generation movement, an opposition party, came amid ongoing protests since October in Baghdad and Iraq’s south demanding an overhaul of the federal government.

The autonomous Kurdish region, which initially saw an economic boom when the rest of the country descended into violence after the 2003 US invasion, is considered to be more secure and prosperous than Iraq as a whole.

But an economic crisis worsened by conflict with the Islamic State group and tumbling global oil prices has given rise to periodic protests in more recent years, especially in the northeastern city of Sulaimaniyah.

On Saturday, thousands took to the streets of the city to decry tough living conditions in a region which has been autonomous since 1991.

The New Generation movement was founded in 2018 to channel public anger at the region’s elite.

Iraqi Kurdistan has been split for decades between the Kurdistan Democratic Party (KDP)– led by the Barzani family — and its rival, the Patriotic Union of Kurdistan (PUK), headed by the Talabani clan.

“By way of demonstrations, we will bring hope back to the youths and the entire Kurdish community,” in Iraq, he said in a speech during the rally.

He said Saturday’s protests were only a “first step.”

A previous demonstration in Sulaimaniyah in December 2017 ended in bloodshed, with five protesters killed by police.

According to the UN, 36 per cent of households across Iraqi Kurdistan — home to around six million people — eke out a living on less than $400 per month.