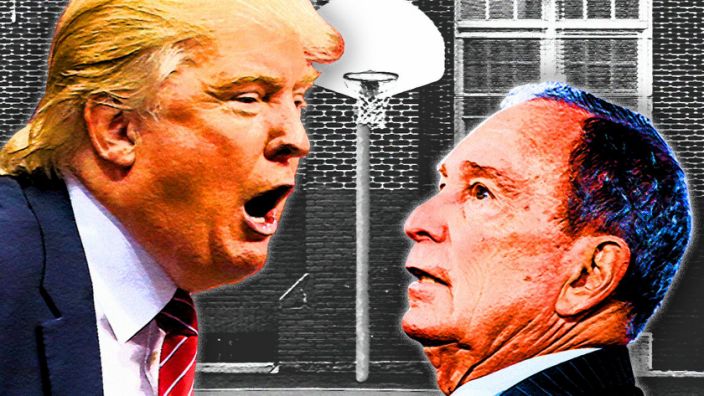 The language of politics, and political analysis, is rich in pugilistic metaphors. Candidates “jab” or “slam” their opponents, hoping for a “knockout blow.” They “counterpunch” against attacks or “duck” when hard questions are thrown at them. But what’s been going on in recent days between Donald Trump and Mike Bloomberg, the former mayor of New York who is running for the Democratic presidential nomination, defies analogy to a boxing match, or any other sanctioned sporting competition — and not just because of the difficulty of imagining the two septuagenarians, one 6 inches taller and (at a guess) 75 pounds heavier than the other, squaring off in boxing trunks.

The back-and-forth between them on Twitter and in rallies and in statements by their campaigns and surrogates calls to mind something else, which anyone of their generation from Trump’s native Queens, or Bloomberg’s adopted home of Manhattan, would instantly recognize: two smart-alecky kids yelling insults at each other from their respective stoops.

The most recent exchange was kicked off by a presidential tweet on Thursday morning that packed into 280 characters two iterations of his favorite epithet for Bloomberg — “Mini” — plus one “tiny” and an unfavorable comparison to Jeb “Low Energy” Bush.

Mini Mike Bloomberg is a LOSER who has money but can’t debate and has zero presence, you will see. He reminds me of a tiny version of Jeb “Low Energy” Bush, but Jeb has more political skill and has treated the Black community much better than Mini! https://t.co/qIef5VhjDr

He followed that with a second round of insults at Bloomberg as “a 5’4” mass of dead energy,” subtracting 4 inches from the admittedly diminutive former mayor’s height as listed on Wikipedia.

Bloomberg responded with a tweet that coined the obviously demeaning, if obscure, epithet for Trump as “a carnival barking clown.” More pointedly, it served as a reminder that Trump was never accepted by the Manhattan elite, who “laugh at you … behind your back” — whereas Bloomberg, a billionaire 50 times over, is one of the few people in the world in a position to look down socially and financially on the president of the United States.

.@realDonaldTrump – we know many of the same people in NY. Behind your back they laugh at you & call you a carnival barking clown. They know you inherited a fortune & squandered it with stupid deals and incompetence.

I have the record & the resources to defeat you. And I will. https://t.co/fO4azmZaUg

At a rally a few hours later, Bloomberg unleashed another zinger that appeared to have been clumsily translated into English from a foreign-language insult-comic routine: “Donald, where I come from, we measure height from the neck up.”

Or, as they say in schoolyards from the Bronx to Coney Island, “I’m rubber, you’re glue.”

Trump, of course, is an experienced hand at this. His governing manner is equal parts adolescent bombast and childish taunt, characterized by City & State magazine as “the belligerent style in American politics,” whose avatar was another opinionated, ill-informed bully from Queens, Archie Bunker. Well past the age — roughly 10 — when most boys realize there are more effective ripostes than to call someone a shrimp, “little” remains one of his go-to Twitter labels, applied indiscriminately to opponents and rivals short (Kim Jong Un, reportedly 5 feet 7 in elevator shoes), average (Marco Rubio, 5 feet 9) and tall (Adam Schiff, 5 feet 11, also a triathlete). (Trump’s last medical report gave his height as 6 feet 3, the same as baseball star Alex Rodriguez and 2 inches taller than former President Barack Obama, as this photograph and these do not illustrate.)

If overt belligerence is an unbridled expression of Trump’s personality, for Bloomberg it is transparently a campaign strategy. In business and in office, his predominant mode of discourse has varied over the years from earnest (defending his plan to tax high-calorie sodas) to sardonic (praising Joe Biden in 2013 for forcing Obama’s hand on supporting gay marriage: “I’m sure the president was ‘evolving’ and was about to do it anyways”). But he’s catching on, having figured out that one of the surest ways to get at Trump is to mock his business record (fellow New Yorkers “know you inherited a fortune & squandered it with stupid deals and incompetence”) and his vanity over his looks. After Trump claimed, falsely, that Bloomberg had asked to stand on a box to make him look taller at the next Democratic debate, the mayor’s spokesperson replied that Trump “is a pathological liar who lies about everything: his fake hair, his obesity and his spray-on tan.” After Attorney General William Barr’s startling admission Thursday that Trump’s habit of tweeting out his every whim was interfering with Barr’s ability to run the Justice Department with even the appearance of impartiality, Bloomberg tweeted snarkily that “If it’s any consolation, Trump’s tweets make it impossible for him to do his job, too.”

As a strategy, it seems calculated to appeal to the long-suppressed id of Democratic voters disillusioned by the results of, in Michelle Obama’s famous phrase, going high when the other side goes low. They are still stung by the memory of John Kerry’s dignified reticence in the face of the outrageous “Swift Boat” attacks on his war record in the 2004 campaign, which can be viewed now as a beta version of the right-wing attack machine that Trump’s allies have brought to perfection. Trump has shown himself eager to hurl insults at rivals, and even their family members, on the basis of their looks, intelligence, health, religion and anything else he can think of.

To which some Democrats, Bloomberg among them, seem inclined to respond in kind. As they used to say in schoolyards, when both Trump and Bloomberg were in school, “Your mother wears Army boots.”