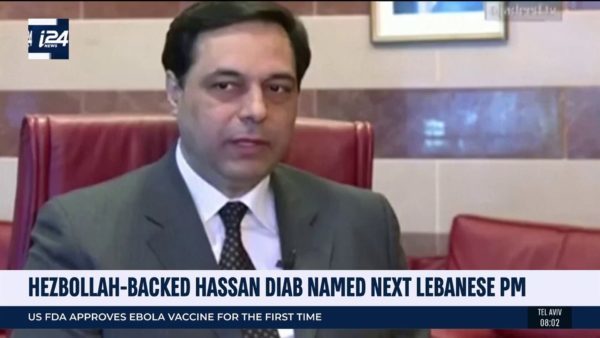 A new prime minister has been nominated in Lebanon. He is unknown to the majority of the Lebanese people and stands accused of being put in place by Hezbollah.
Hassan Diab was congratulated on his new position only by a few states, one of which was Iran. Most governments chose to ignore him while they wait to see what he will do. The Lebanese people greeted the news with further demonstrations, in protest against his nomination.
Whether Diab is a front for Hezbollah or not, the truth is that the entire Lebanese state is being held hostage by Hezbollah and its affiliates. We do not expect him to dispel the doubts, either among protesters or foreign governments. He is on trial in front of the international community, where he must prove that he is not a puppet controlled by Hassan Nasrallah and his allies. Mere reassurances will not be enough to satisfy the West.
More than half of the new Cabinet ministers hold dual US-Lebanese nationalities. Still, what is more important than possessing an American passport is for Diab to satisfy the requirements of the US, which include that he refrain from dealing with institutions and individuals from Lebanon, Iran and other nations that are on Washington’s list of sanctions targeting Iran. These requirements are accepted by governments and authorities of much greater stature and power than that of Diab’s, including China and European nations.
Despite being full of commitments, Diab’s inaugural speech did not reassure protesters. All it proved was that the power brokers running things behind the scenes do not intend to implement real reforms. One individual involved in Lebanese affairs said that, at an international level, $9 billion is available to assist Lebanon. To get it, all Diab need do is implement governmental reforms that would free customs authorities, airports and ports from Hezbollah’s control, in addition to the dozens of ministries and public services that have become a source of financing for the group’s militias rather than the government. Can he do that? Probably not.

Whether Diab is a front for Hezbollah or not, the truth is that the entire Lebanese state is being held hostage by Hezbollah and its affiliates.

More so even than the demands of the US or protesters, the biggest challenge that might await Diab is the likely bankruptcy of the Lebanese banks. During an interview, Riad Salameh, governor of the Lebanese central bank, said that the nation’s financial solvency is sufficient and depositors’ accounts are safe. His comments were greeted by further attacks on banks by angry protesters. Rationing of cash withdrawals was imposed some time ago and remains in place, reinforcing rumors of bankruptcy that might lead to the collapse of Diab’s government before the summer.
In light of the government’s impotence, if Hezbollah is the problem could it also be the solution? Will it show some flexibility and make concessions that restore sovereignty to the state? It controls much of the state’s resources, either at gunpoint or through government nominations, and was behind investors’ escape from Lebanon, whether being foreign governments, international organizations, or Lebanese expatriates.
Hezbollah’s strategy regarding the crisis seems to be in sync with that of Iran. Tehran is experiencing a similar crisis, including the wrath of its people, who are suffering from the effects of corruption, including poverty. The strategy chiefly consists of waiting until the end of this year to see how the US presidential election plays out.
All Diab can do in the meantime is try to keep the political and economic situation under control. He might not succeed, yet still he waits, hoping for a political breakthrough between Tehran and Washington, or for US President Donald Trump to be defeated in the November election and replaced by a Democrat whose agenda might include a truce with Iran.
Can Hezbollah keep Lebanon waiting for another nine months? If it tries, it might not hesitate to use further force against demonstrators, which could lead to an escalation of the revolution, especially if the banks file for bankruptcy.

Abdulrahman Al-Rashed is a veteran columnist. He is the former general manager of Al Arabiya news channel, and former editor in chief of Asharq Al-Awsat. Twitter: @aalrashed