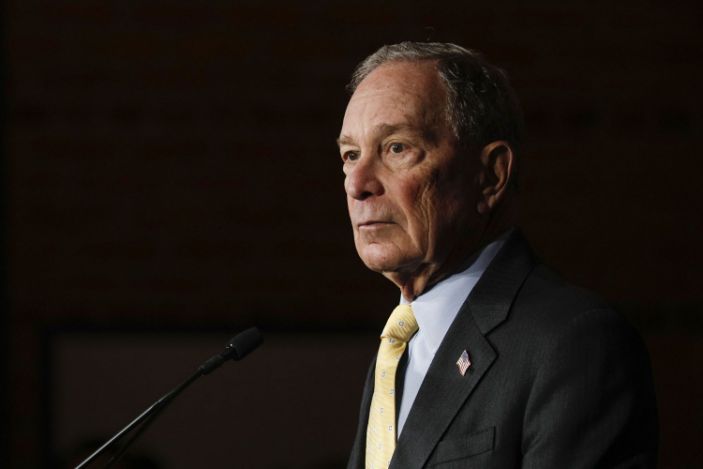 Democratic candidates and President Trump took fresh aim this week at Mike Bloomberg, the former New York City mayor who has staked a small part of his personal fortune by outspending everyone else in trying to win the White House. By flooding the airwaves with ads and nailing down endorsements from Democrats, many of whom have benefited from his largesse, he has risen into the double digits in several polls of Democrats despite not appearing in any debates so far.

“I got a real problem with multibillionaires literally buying elections,” Sanders said in an interview with NBC News. “I don’t begrudge his wealth, but I do begrudge a billionaire thinking he can buy the election.”

“He has every right in the world to run for office,” the Vermont senator continued, “but he doesn’t have the right to buy an election.”

“I don’t think people look at the guy in the White House and say, ‘Oh, I want someone richer,’” Klobuchar said on ABC’s “The View.”

“A video just came out yesterday in which Michael Bloomberg is saying, in effect, that the 2008 financial crash was caused because the banks weren’t permitted to discriminate against black and brown people,” Warren said at a rally in Virginia on Thursday. “That crisis would not have been averted if the banks had been able to be bigger racists. And anyone who thinks that should not be the leader of our party.”

Warren also took a swipe at Bloomberg’s late entry into the Democratic race.

“We’ve been going at this for about a year,” she said. “Some people got in a little later than others. Michael Bloomberg came in on the billionaire plan — just buy yourself the nomination.”

Bloomberg, whose campaign is self-funded and not accepting donations, is close to qualifying for next week’s debate after the Democratic National Committee promulgated new rules that did away with the minimum requirements for donor support that were in place for all the previous contests. The new threshold is 10 percent or more support in at least four DNC-approved polls by Feb. 18. (Bloomberg has three.)

Asked on “CBS This Morning” whether Bloomberg should be allowed on the debate stage, Sanders said, “Of course not.”

“Some very good friends of mine who were competing in the Democratic nomination — people like Cory Booker, Julián Castro — worked really, really hard,” Sanders said. “Nobody changed the rules to get them into the debate. But I guess if you’re worth $60 billion you can change the rules.”

Klobuchar, though, said she would relish the opportunity to debate Bloomberg.

Even former Vice President Joe Biden, who is not exactly the strongest debater, is champing at the bit.

“I’m going to get a chance to debate him on everything from redlining to stop-and-frisk to a whole range of other things,” Biden said in his own appearance on “The View.”

When asked what he thought about an audio clip from 2015 of Bloomberg defending stop-and-frisk policing, Biden laughed.

“I’m laughing because it’s amazing how every single thing I’ve said for the last 40 years has come up, and I’ve answered them all,” he said. “We’re just now getting into the place where we’re looking at other people’s records.”

While some polls have shown Bloomberg ascending in the race, a Yahoo News/YouGov survey released Friday found that he would actually fare poorly in two-person matchups with all five top Democrats:

Sanders gains in other polls

While national polls are still sparse, a few released in recent days show continued gains for Sanders — in both early and Super Tuesday states. A new University of Texas/Texas Tribune poll has Sanders up 12 points, passing both Warren and Biden, who are feeling the effects of  disappointing results in Iowa and New Hampshire. A rich trove of 261 delegates is up for grabs in Texas, and a handsome showing by Sanders in the state could make it difficult for other Democratic candidates to catch up. Bloomberg, who’s been blanketing the airwaves in Super Tuesday states in lieu of being a contender in the early-state process, followed Biden and Warren in fourth place.

Bloomberg also surpassed Biden in a state poll in Florida, another state known for making or breaking a campaign — a possible sign of a tightening contest between the New York billionaire and the democratic socialist.

A caveat is that hardly any Democratic voters of color have cast their first ballots, and changes in voter behavior could radically alter the state of play. According to Morning Consult, black voters still support Biden more than any other candidate, though not by the 30-point margin he maintained last year. Only 4 points behind Biden among blacks is Sanders and, after him, Bloomberg — defying expectations that Bloomberg’s stop-and-frisk policing policy as mayor would disqualify him among minorities. The poll also shows Sanders maintaining a national lead with Hispanic voters, a voting bloc that will be consequential in Nevada, a state that is roughly one-third Hispanic.

With the pace of the primary contests picking up, so is the progression of Democratic debates. The next one will be on Wednesday, when the candidates will gather in Las Vegas in advance of Nevada’s Feb. 22 caucuses.

As noted above, the Democratic National Committee took heat from most of the candidates when it announced a different set of rules for this debate. While Democrats used to have to hit a threshold of both polling and fundraising, the donor requirement was dropped for next week’s gathering, opening the door for Bloomberg to participate even though he’s not taking outside contributions.

Another wrinkle to keep an eye on: NBC News and MSNBC are hosting the debate, and “Meet the Press” host Chuck Todd will be one of the moderators. Earlier this week, the Anti-Defamation League admonished Todd for likening Sanders supporters to Nazis during a segment. MSNBC has also faced criticismfor its coverage of Sanders, so how they question the leading vote getter of the primary so far will be scrutinized.