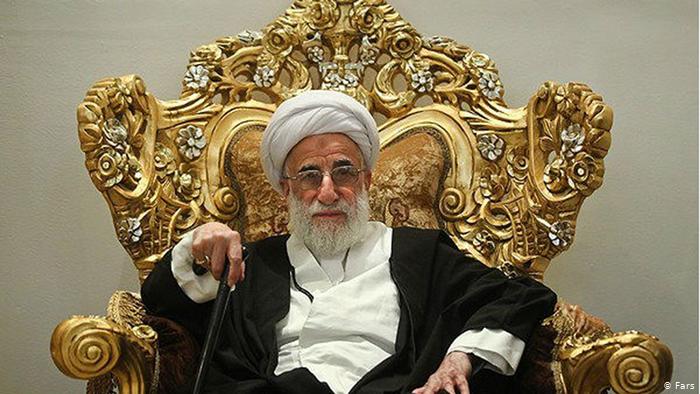 Ayatollah Ahmad Jannati occupies two prominent posts in Iranian politics as chairman of the Assembly of Experts, the body charged with choosing the Supreme Leader, and as chairman of the Guardian Council, the body in charge of checking legislation approved by the parliament with the Constitution and sharia, and approving the candidates in various elections. Jannati has been a member of the Guardian Council since 1980 and has been its chair since 1988 . Iran’s Guardian Council barred thousands of reformers from runny ng in upcoming elections
Share:

Campaigning is under way for Iran’s parliamentary elections on February 21, but the vote has already been marred by interference from the country’s ultimate rulers. The Guardian Council, headed by Supreme Leader Ayatollah Ali Khamenei, has barred more than 7,000 candidates from standing. This move threatens to bring turnout to a record low and strengthen hardliners’ grip on power.

Amid ongoing tensions with the United States after the killing of Qassem Soleimani at the start of the year, campaigning started on Thursday for Iran’s legislative elections next week. These polls are set to produce an impressive performance for hardliners, after the country’s Guardian Council disqualified thousands of reformist candidates.

According to official figures, 7,296 applications to stand in the elections were rejected – compared to 7,148 that were accepted.

President Hassan Rouhani – who occupies a middle ground between hardliners and reformists – has repeatedly called on Iranians to turn up at the ballot box en masse for the parliamentary elections. However, in an interview with FRANCE 24, Thierry Coville, an Iran specialist at the IRIS think-tank in Paris, argued that this mass disqualification of candidates risks encouraging people to not vote at all – to the benefit of powerful ultra-conservatives.

What’s the big issue in these forthcoming elections?

Turnout. We’re hearing that – especially in large cities – people don’t want to vote. Iran is undergoing economic and political crises and many are disillusioned with Rouhani. There were mass protests in November 2019 – and, of course, in response to the downing of the Ukrainian passenger plane after the Soleimani killing last month.

But the biggest cause of discontent is the disqualification of moderate candidates from standing in next week’s elections. 75 percent of MPs can’t stand for re-election – that’s huge. There’s no longer any shadow of a doubt about the result, seeing as nearly all the candidates are now hardliners. Supporters of the regime – who make up about 30 percent of the population – will go out and vote but it’s hard to see how the urban middle-class could mobilise.

Then you’ve got the people who took to the streets towards the end of last year – many of them amongst the poorest in Iranian society. But the regime’s response to those protests was merciless.

Why were so many reformist candidates barred from running?

The Guardian Council is dominated by hardliners. In theory, it’s still supposed to ensure that candidates simply respect the law – yet in reality it’s used as a political weapon. This is by no means a new phenomenon, but it’s happening on a scale we’ve never seen before. We’re hearing that hardliners think reformists have been weakened by the economic and political crisis, and that people wouldn’t have been keen to go out and vote anyway.

The ultra-conservatives don’t really believe in the democratic process, so they see these elections as a good opportunity to take control of parliament. If it were just business as usual, with an ordinary level of turnout, they wouldn’t be so lucky. But, by this point, all critical and moderate voices have been drowned out.

What kind of position is Rouhani in right now?

He’s already very weakened, and will end up facing a very critical parliament – even if it no longer really plays a role. That said, it’s become apparent that hardliners aren’t thinking about impeaching him anymore. They’re starting to understand that it’s better to have him as the front man, taking all the hits, because they wouldn’t do any better in that role.

Are the hardliners on manoeuvres ahead of the 2021 presidential elections?

It’s a bit like what we saw at the end of the reformers’ heyday, during president Mohammad Khatami’s second term before he left office in 2005. The hardliners are engaged in a strategy to take complete control. Next week, they can get a grip on parliament, and obviously they are starting to think about the presidential elections in 2021.

Are they also trying to send a message about the tensions with the US?

The tough guys are accumulating as much power as possible within Iran to stop voices within the country from criticising them. This looks set to lead to an even more aggressive foreign policy, and doesn’t look likely to produce a détente with America before the US presidential elections. The important thing for the hardliners is to control all the levers of power and have unity in the ranks – so they can concentrate on the response they will hand out to the US. The way they see it, they are at war.