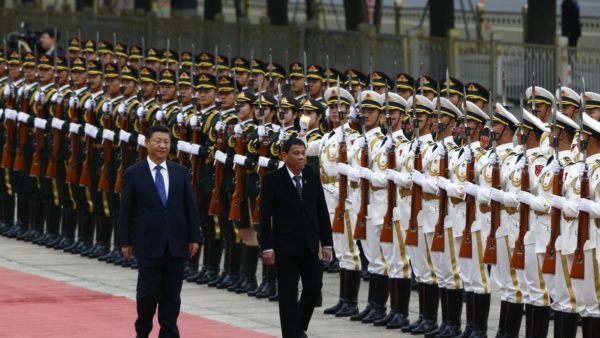 File photo : Chinese President Xi Jingping is shown welcoming Duterte with full military honors at the Great Hall of the People in Beijing in October 2016 . Philippine President Rodrigo Duterte left no room for doubt about where his allegiance lies in 2016 during his visit to China . In a state visit aimed at cozying up to Beijing as he pushes away from Washington, the Philippine President announced his military and economic “separation” from the United States. “America has lost now. I’ve realigned myself in your ideological flow,” he told business leaders in Beijing on October 20 , 2016. His announcement today about terminating the agree meant with the Us is a confirmation of his earlier statements
Share:

Philippine President Rodrigo Duterte dealt a major blow to the United States on Tuesday (February 11), after he terminated a two-decade-old Visiting Forces Agreement– delivering on threats to downgrade an alliance crucial to U.S. interests.

A spokesman for the president – who has clashed with the former colonial ruler over several issues – said he decided to pull the plug on the two-decade troop rotation pact to enable the Philippines to be more independent with its relations with other countries.

“As the President said, it’s about time we rely on our own resources, we have to strengthen our own capability as a country relative to the defense of our land.”

The decision could complicate U.S. military interests in the Asia-Pacific as China’s ambitions rise.

The U.S. embassy in Manila called it “a serious step with significant implications.”