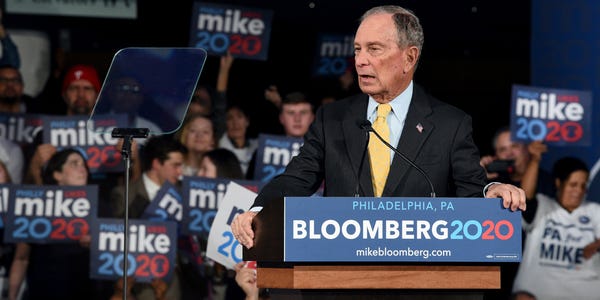 A senior adviser to Mike Bloomberg hit out at Donald Trump Jr. on Tuesday, listing examples of his father’s “racism and bigotry” after the president’s eldest son shared a clip of the former New York City mayor defending his controversial “stop and frisk” policing strategy.

In a thread posted on Twitter yesterday afternoon, Tim O’Brien described President Donald Trump as a “flagrantly hateful racist” and said his boss Bloomberg was not “in the same category” as the commander-in-chief.

He went on to list examples of Trump being “racist” to people of color on Capitol Hill and elsewhere in the world, both before and during his presidency.

The senior adviser’s criticism of the president came shortly after a 2015 clip of Bloomberg defending stop and frisk and putting “all the cops” in minority neighborhoods surfaced on social media, causing the hashtag #BloombergIsRacist to trend.

A copy of the Democratic presidential candidate’s Aspen Institute speech shared by podcaster Benjamin Dixon has picked up more than seven million views so far.

In the clip of his speech, Bloomberg is heard saying: “Ninty-five percent of your murders and murderers and murder victims fit one M.O. You can just take the description, Xerox it and pass it out to all the cops. They are male minorities, 15 to 25.”

He also said: “One of the unintended consequences is people say, ‘Oh my god, you are arresting kids for marijuana, they’re all minorities.’ Yes, that’s true, why? Because we put all the cops in the minority neighborhoods. Yes, that’s true.

“Why did we do it? Because that’s where all the crime is. And the first thing you can do for people is to stop them getting killed.”

After the audio resurfaced, the president’s eldest son tweeted a clip of the talk with the hashtag #BloombergIsARacist.

Responding to the post, O’Brien tweeted: “Your father is the most overt and flagrantly hateful racist and bigot of the modern presidency and nothing—absolutely nothing—in Mike Bloomberg’s background puts him in the same category as your dad.”

He went on to list several allegations and examples of President Trump’s past racism including his support of the birtherism conspiracy theory that wrongly suggested former President Barack Obama was not born in the United States.

O’Brien also noted that the commander-in-chief imposed a travel ban on seven Muslim-majority countries when he came into office, and told American Democratic congresswomen of color to “go back” to the “totally broken and crime infested places from which they came.”

1/x: Omg! Your father is the most overt and flagrantly hateful racist and bigot of the modern presidency and nothing – absolutely nothing – in Mike Bloomberg’s background puts him in the same category as your dad. But let us count the ways:https://t.co/QdlKVOffGx https://t.co/dzm6DzPKRw

“Mike Bloomberg apologized and will continue to apologize for stop and frisk,” O’Brien added. “It was wrong and he stood by it for too long. But it hardly defines the totality of his work with people of color, and the broad policies he continues to pursue to empower people of color.”

“Still waiting for your dad to apologize for the racism and bigotry he’s visited upon communities of color at home and abroad during his presidency—and decades before,” the adviser added.

Newsweek has contacted the White House for comment on O’Brien’s posts and will update this article with any response. The Bloomberg 2020 campaign has also been contacted for comment on the 2015 Aspen Institute talk.

In a statement released yesterday, Bloomberg said he had inherited the stop and frisk policy when he became New York City mayor but admitted it had been “overused” to stop gun crime and said he should have cut it “faster and sooner.”