373 injured after protesters clashed with Police outside parliament 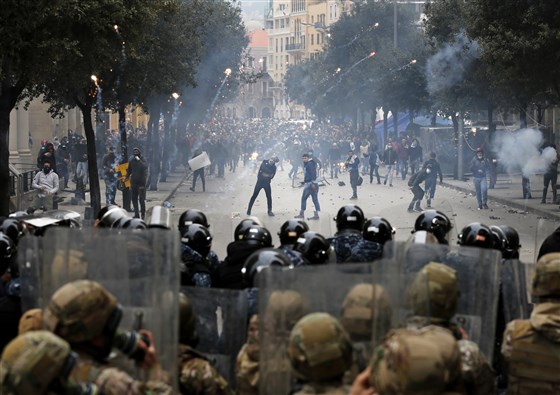 Lebanon’s parliament met Tuesday for a confidence vote on a new government as protesters clashed outside with security forces who used teargas and water cannon to disperse them.

The Red Cross said a total of 373 people were treated for teargas exposure and other injuries, including 45 who were taken to hospital.

The new prime minister, Hassan Diab, a little-known academic and former education minister, was tasked with forming a government in December after premier Saad Hariri was forced to resign by pressure from the street.

But more than three months on, angry demonstrators charge that his proposed new cabinet fails to address their demands and won’t be able to rescue Lebanon’s ailing economy.

Before the session started in an area cordoned off by riot police and soldiers, protesters mobbed the tinted-glass vehicles of lawmakers and lobbed water bottles at them in a bid to stop them reaching parliament for the vote.

Sixty-eight out of the 128 lawmakers however made it in, meeting the required minimum to proceed with the session.

A group of protesters surrounded the car of one Cabinet minister, Demianos Qattar, as he was on his way to parliament, pelting it with eggs and pounding it with their fists before soldiers and police pushed them away.

The protesters also attacked legislator Salim Saadeh in his car. “Thank God I am good. I thank everyone for their love,” Saadeh said in a video posted on his Twitter account, his shirt tainted with blood and his left eye blue and swollen.

“Does the protest movement approve of the attack on colleague Salim Saadeh?” Parliament Speaker Nabih Berri said during the parliament session.

Saadeh later went to parliament with a bandaged head and gave a speech in which he criticized widespread corruption in the country.

Protesters also attacked a cameraman working for the local OTV TV station run by loyalists to President Michel Aoun. Since the protests began nearly four months ago, journalists have been attacked by both government supporters as well as opponents.

Near one of the entrances, supporters of the AMAL Movement attacked some protesters to force them to open the way. Security forces separated the two sides.

Earlier, security forces used tear gas and water cannon to break up groups of demonstrators who hurled rocks over the blast walls erected to block off roads leading to parliament.

“I’m here to say ‘no confidence’ in the government because the way it was formed shows that it cannot be trusted,” said one protester who gave her name as Carole.

A group of protesters later set fire to a bank in the downtown area.

Demonstrators draped in Lebanese flags and chanting “no confidence” had started gathering early in the morning before parliamentarians were set to arrive for the vote.

Some lawmakers had spent the night in parliament to thwart protesters who have successfully prevented several previous sessions since they launched their campaign in October.

Lebanon’s cross-sectarian protest movement has pushed for the wholesale removal of a hereditary political elite widely seen as corrupt and incompetent.

While Diab has vowed to carry the hopes of the protesters, portfolios in his government were shared out through the same partisan and sectarian gamesmanship that has been the trademark of Lebanon’s political class for decades.

Inside parliament, Diab said his cabinet was determined to draw up an emergency rescue plan for the country by the end of the month.

With the economy badly hit, he warned that “we could reach a complete collapse from which it will be hard — if not near impossible — to get out.”

The international community has pledged more than $11 billion in desperately needed financial aid, but made it conditional on the speedy implementation of economic reforms.

– ‘People have no confidence’ –

But in the street, one of the protesters, 26-year-old Christopher, said he had little faith in the new leadership.

“We are here to reject Diab’s government and to say that the Lebanese people have no confidence in it — even if lawmakers vote to support it.”

He said the new ministers may appear to be qualified but they still depended on “the parties that destroyed the country.”

Demonstrators had traveled to Beirut from as far as Sidon, Tripoli and Tyre.

Human Rights Watch condemned the use of force against demonstrators.

If approved by parliament, the new government will face one of the worst crises in the county’s recent history.

The protests spell the biggest popular challenge to the power-sharing system that emerged from the 1975-1990 civil war.

Lebanon is also on the brink of defaulting on its debt and the impact is being felt by all social classes, with tough restrictions on cash withdrawals and a de-facto devaluation of the national currency.

One placard at Tuesday’s protest carried the sarcastic message: “Of course we are confident — that they will help the banks to the detriment of the people.”

The World Bank has warned that if no solution is found swiftly to the crisis, the poverty rate may shoot up from a third to half of the population.