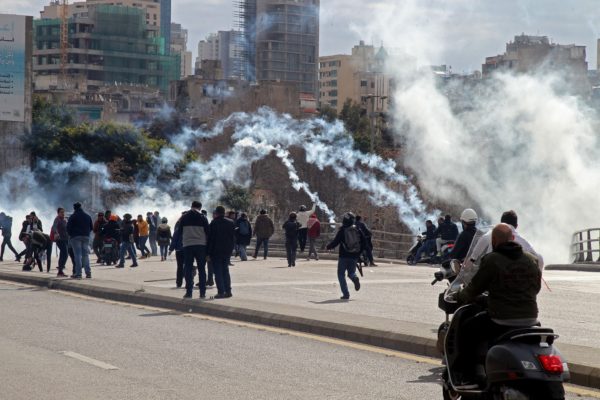 Thousands of protestors clashed with security forces in central Beirut on Tuesday morning as they tried to prevent the confidence vote in Lebanon’s new government from going ahead. Army troops deployed tear gas and water cannon against protestors at multiple points close to the Parliament building on a clear but cold winter morning.
Share:

Lebanon’s new cabinet won a vote of confidence in parliament on Tuesday based in part on a financial rescue plan it put forward for grappling with a deep financial crisis.

Parliament Speaker Nabih Berri congratulated Lebanese lawmakers who sat through an eight-hour session before holding a vote that saw 63 out of 84 MPs present give their confidence to the new government.

The Lebanese parliament has 128 members but many decided not to come because they view this cabinet as a Hezbollah government . The 63 votes represent less than half the parliament ( roughly 49%) . This is the lowest score of any government in Lebanon’s modern history .

The MPs of Hezbollah , Free Patriotic Movement, AMAL Movement and their allies granted their vote confidence to Hassan Diab’s government, while those of al-Mustaqbal Movement, the Progressive Socialist Party and the Lebanese Forces withheld it.

Speaking just before the vote, Prime Minister Hassan Diab said his government’s priority was preserving foreign currency needed for critical imports and that all options for dealing with Eurobonds maturing this year were being studied.

Reporting from the capital, Beirut, FRANCE 24’s Leila Molana-Allen said the all-day session began with Diab “laying out the Cabinet statement and their plans, saying they were going to tackle corruption…[that] they were going to figure out plans to help the poorest in society, they were going to back local industry, local commerce”, she explained.

Diab also said he would have to implement “painful” measures to revive the economy. Lebanon has one of the highest debt ratios in the world, standing at more than 150 percent of GDP and worsening over recent years with no economic growth and high unemployment.

The prime minister said his Cabinet was “going to abide by the austerity measures that international donors have said they have to enact in order to access the $11 billion potential funds for Lebanon. Many Lebanese here feel they cannot face any more austerity, they’re already in a dire situation,” explained Molana-Allen.

The international community has pledged more than $11 billion in desperately needed financial aid, but made it conditional on the speedy implementation of economic reforms.

Earlier Tuesday, protesters clashed outside the parliament building with security forces who used teargas and water cannon to disperse them.

The protesters are calling for sweeping reforms and an end to a political class they deem as corrupt and incompetent, blaming it for the rapidly worsening financial crisis.

The Red Cross said a total of 373 people were treated for teargas exposure and other injuries, including 45 who were hospitalised.

Diab, a little-known academic and former education minister, was tasked with forming a government in December by the Iranian backed Hezbollah militant group and its allies after mass rallies against official corruption and economic woes forced premier Saad Hariri to resign.

But more than three months on, angry demonstrators charge that the new cabinet fails to address their demands and won’t be able to rescue Lebanon’s ailing economy.

But enough lawmakers reached the chamber to make the vote valid. One member of parliament turned up with a black eye, following a brief trip to hospital after he was wounded trying to reach the chamber.

Human Rights Watch condemned the use of force against demonstrators.