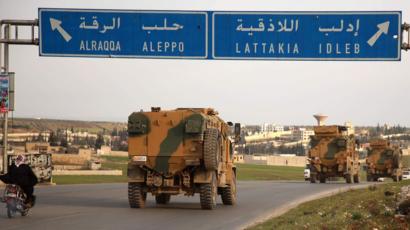 Turkey said it carried out sweeping retaliation for a deadly attack on its troops in Syria, hitting 115 targets with strikes that officials estimated may have killed scores of pro-Assad troops.

The surge in fighting poured fuel on the countries’ deepening confrontation shortly after Turkey’s leader, Recep Tayyip Erdogan, had ordered a massive deployment to impel a Syrian withdrawal from areas close to Turkish positions. At least 12 Turkish soldiers have now been killed in Idlib this month.

Turkey stationed troops in the province under a 2017 deal with Russia and Iran to curtail fighting there and prevent a new exodus of refugees from heading toward its border. However, Syrian forces — reinforced by Russian warplanes — have been battering Idlib to try and take control of strategic highways as well as vanquish onetime al-Qaeda affiliates and Turkey-backed fighters in the country’s last major rebel stronghold.

Erdogan last week threatened to break the siege of some Turkish outposts by Assad’s forces if they don’t withdraw by the end of February. It was unclear whether Monday’s casualties will force him to act sooner.

“A heinous attack occurred today in Idlib, where our military serves, pursuant to our rights under international law, to end the violence and mitigate the humanitarian crisis,” said Erdogan’s communications director, Fahrettin Altun.

Turkish stocks and bonds plunged following reports of the Turkish fatalities. The benchmark Borsa Istanbul 100 Index fell as much as 3.3% to a one-month low, extending its biggest decline since October. The yield on 10-year government bonds surged 43 basis points to 11.1%. The lira was relatively unscathed after authorities on Sunday made it more difficult for foreign investors to bet against the currency.

Turkey had sent hundreds of tanks, armored personnel carriers and commandos to Idlib over the weekend, the state-run Anadolu Agency reported Monday.

“Our main goal is to prevent a refugee exodus and humanitarian drama,” Defense Minister Hulusi Akar was cited as saying Sunday by the Hurriyet newspaper. “We’re trying to reach a cease-fire and stop the bloodshed.”

If the violation of the Sochi and Astana agreements — struck by Turkey, Russia and Iran to curtail fighting in northern Syria — “continued, then we have plans B and C,” Akar said. “We keep telling them not to force us” to implement those plans.

Turkish officials held talks with a Russian delegation in Ankara Monday after failing to reach an agreement on Idlib on Saturday, Foreign Minister Mevlut Cavusoglu said. Erdogan and Russia’s Vladimir Putin may meet if no deal can be reached, he said.

At the talks, Turkey reminded Russia of its responsibilities as a guarantor of the Sochi agreement and the need to fulfill them, Erdogan’s spokesman Ibrahim Kalin said.

The fighting in Idlib marks the lowest point for tensions between Moscow and Ankara since the 2015 downing of a Russian warplane by Turkish fighter jets. It comes as Putin and Erdogan jostle for dominance in the Middle East and eastern Mediterranean, while operating within the rough boundaries of their difficult alliance.

Turkey, which already shelters the largest number of Syrian refugees, fears another 1 million to 2 million people may flee toward its border if Idlib falls.

James Jeffrey, the U.S. envoy for Syria engagement and the special envoy to the global coalition to defeat Islamic State, is traveling to Ankara for talks with senior Turkish officials on the Assad regime’s offensive in Idlib and other Syria-related issues, the State Department said.