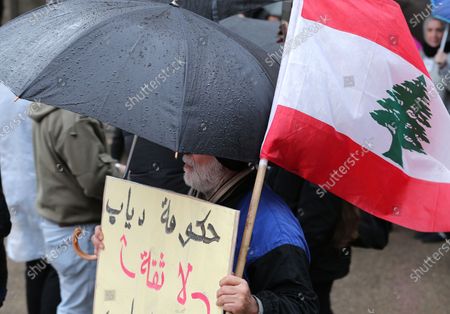 Mandatory Credit: Photo by NABIL MOUNZER/EPA-EFE/Shutterstock (10551649f) Anti-government protesters carry placards with Arabic word ‘No confidence in the government and no confidence in the Parliament’, as they wave Lebanese flags and shout slogans, during a protest in front of the Lebanese Parliament building in downtown Beirut, Lebanon, 08 February 2020. The interior ministry placed cement barricades in the downtown to protect the government buildings, where anti-government protesters continue taking to the streets to demand the resignation of the new government, because it is a government of quotas between power parties. Anti government protest in Beirut, Lebanon – 08 Feb 2020
Share:

On January 25th, 100 days since the start of Lebanon’s October Revolution, throngs of protesters peacefully marched to Beirut’s Riad al-Solh Square under two main slogans: “No confidence ” in the newly formed government, and “We won’t pay the price” of the financial crisis.

As night fell and crowds thinned out, a new round of violence against protesters erupted. Riot police used water cannons and tear gas to disperse protesters who were trying to break the metal barricade around the government’s headquarters and the home of new prime minister, Hassan Diab.

Some protesters wondered whether Diab was watching the crackdown live from his window, and whether he could smell the toxic odour of the teargas.

Distrust of the ruling class

On Tuesday, the newly formed government’s vote of confidence will take place amid a continued crackdown on protesters.

Since mid-January, protests have ramped up with demonstrators denouncing Lebanon’s deteriorating economic situation and expressing distrust of the ruling class and the newly appointed prime minister.

On 14 January, clashes with security forces outside the central bank resulted in scores of injuries and 57 arrests. The next day, protesters gathered in front of el-Helou police station to demand the release of those arrested; as tensions mounted, riot police responded with a new round of excessive violence that led to more casualties.

Over the weekend of January 18-19 th, protests moved to central Beirut, near the entrance of the heavily fortified parliament. It was during this weekend that Lebanon’s deep state showed its teeth. As protesters gathered in front of the barbed-wire and steel gate separating them from Nejmeh Square, where parliament is located, violent clashes erupted.

Protesters threw stones, water bottles and firecrackers at parliament guards and security forces, who replied with water cannons, tear gas and baton beatings. What was most alarming was the unlawful use of rubber-coated metal bullets at close range, which led several protesters to lose eyesight. A widespread solidarity campaign saw activists sharing their photos with an eye covered.

That weekend ended with more than 540 wounded, and many of those arrested reported being tortured inside police stations or encountering rape threats from security forces. In this context of heightened repression and brutal violence against protesters, a new government was announced on 21 January.

On 29 October, less than two weeks into the Lebanese uprising, Prime Minister Saad Hariri resigned under heavy street pressure. This led to a political deadlock that lasted until 19 December, when Diab, the former education minister, was appointed prime minister. This was perceived by many, especially within the Sunni community, as a victory for Hezbollah and its allies, who sidelined Hariri after several failed attempts to bring him back as prime minister.

Met with widespread popular rejection, the mission of forming a new government proved arduous. Although Diab comes from an academic background, his previous position as minister and his close ties with some of the ruling political parties made him unacceptable in the eyes of the uprising.

Protesters have been calling since October for an independent prime minister to form a transitional government of independent experts from outside the established political parties, who could deal with the crippling economic crisis and prepare for new parliamentary elections.

As negotiations for forming the cabinet ensued, Diab’s popularity sank further. While he presented himself as independent, he was clearly working from within the same old wrestling ring of the ruling class.

A month after his appointment, Diab announced the formation of his cabinet towards the end of January. Composed of 20 ministers, it came with a technocratic flavour that made it seem independent from the outside. Adding to its appeal, especially among the international community, the gender card was played: this is the first cabinet in Lebanon with six women, and the first government in the Arab world with a female defence minister.

But it wasn’t long before the allegiance of many ministers to the parties previously known as the March 8 Alliance became clear, as photos emerged on social media of some participating in political events for Amal, Hezbollah or the Free Patriotic Movement. The new “techno-shadow” cabinet was quickly dubbed a “one-colour government”, which looks technocratic from afar but is clearly shadowing the same political leaders the revolution erupted against.

Announced amid a heavy crackdown on protesters, the new government does not meet the aspirations of the Lebanese people. Not only are its leanings towards the Syrian regime and the old Lebanese security apparatus alarming, but its economic plan to get the country out of the current financial crisis is also disastrous.

The Lebanese people are reclaiming their future. Can they seize it?Read More »

As became obvious during the parliamentary session that approved the now-outdated 2020 budget prepared by the Hariri cabinet, the new government seems to be working to save bankers and oligarchs at the expense of the middle and working classes.

Amid a dire financial situation, with people being humiliated daily at the doors of banks, and with commercial banks comprising the biggest creditors to the state, it is outrageous to have a banker leading the economy ministry.

It is similarly outrageous to install a finance minister who announces immediately upon taking office his plan to get more loans from the International Monetary Fund, as though we have learned nothing from the catastrophic history of neoliberal practices and IMF or World Bank interventions.

Lebanon’s October Revolution can only continue as the economic crisis deepens and repression increases. Through better organisation, the revolution can mature into a serious political alternative to the current regime, proposing new ways of doing politics that prioritise society over profits. Until then, Lebanon’s neoliberal sectarian regime will keep reproducing itself.