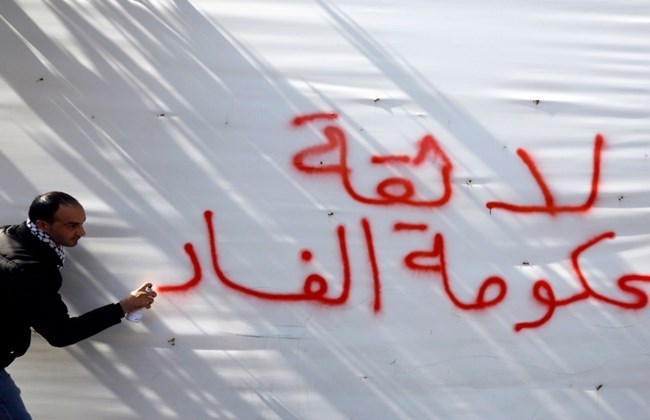 Protesters urge parliament not to grant its vote of confidence confidence to the corrupt government of PM Diab
Share:

BEIRUT, Lebanon – Security forces and anti-government protesters are gearing up for a showdown Tuesday over a Parliament session dedicated to discussing the government’s policy statement and holding a vote of confidence on the new Cabinet.

Thousands of anti-government protesters have been demonstrating in Downtown Beirut and other areas in the past few days to express their rejection of Prime Minister Hassan Diab’s government by carrying banners reading: “No confidence.”

On the eve of Tuesday’s session, protesters posted leaflets on social media calling on the Lebanese to march toward Parliament early in the morning to prevent lawmakers from granting the government a vote of confidence.

Under the hashtag “No confidence,” one leaflet read: “My people go down to Parliament. My people defend your right.”

In the face of protesters’ determination to thwart the two-day session – set for Tuesday and Wednesday – by blocking roads leading to the Nijmeh Square, where Parliament is located, security forces Monday beefed up security measures in Downtown Beirut by erecting more concrete walls across the northern entrance to Martyrs’ Square.

In addition to the concrete walls, all entrances to Martyrs’ Square are already surrounded by barbed wires and waist-high metal barriers and manned by members of Internal Security Forces. Concrete walls first started appearing in central Beirut in December following repeated scuffles between security forces and protesters who attempted to break through security barriers to enter Parliament and storm the Grand Serail, the government’s seat.

Security forces, backed by Army troops and anti-riot police, are poised to deploy heavily in Downtown Beirut at dawn Tuesday to ensure protection for the Parliament session set to be chaired by Speaker Nabih Berri at 10:30 a.m. and attended by Diab and his Cabinet members.

Although Diab’s 20-member Cabinet, made up of specialists nominated by Hezbollah, the Free Patriotic Movement and their allies, is assured of winning a confidence vote from the 128-member legislature because Hezbollah and its allies hold a parliamentary majority, four main parties that have stayed out of the government have said they would not grant it a confidence vote. These are the Future Movement, the Lebanese Forces, the Progressive Socialist Party and the Kataeb Party, in addition to a number of independent MPs.

Following a meeting chaired by former Prime Minister Saad Hariri Monday, the Future Movement’s 19-member parliamentary bloc said its MPs would attend the Parliament session but would not grant the government a confidence vote.

“The bloc discussed the position to be taken regarding the confidence session and decided to attend tomorrow’s meeting without granting its confidence,” said a statement issued after the bloc’s meeting held at Hariri’s Downtown Beirut residence. “This is based on the fact that the government has nothing to do with the demands of the Lebanese and its policy statement, just like the budget it adopted, is constituted of scraps copied from previous statements and does not fit the current period or the financial, monetary and socio-economic crisis facing Lebanon.”

Referring to anti-government protesters who plan to thwart the Parliament session, the statement said: “The bloc also stressed the need to respect citizens’ right to peaceful expression within the framework of respecting the law and not attacking public and private properties.”

Speaking to reporters after chairing the bloc’s meeting, Hariri said he had not yet decided whether he would personally attend the Parliament session.

“Everyone knows that tomorrow we will not grant confidence to the government. We will not participate in the session just for the sake of participating, but to say our word in Parliament because I cannot choose the policy of fighting obstruction and be part of it at the same time,” Hariri said, according to a statement released by his media office.

Asked about the reasons for holding the commemoration of the 15th anniversary of the assassination of his father, former Prime Minister Rafik Hariri, at his Downtown residence instead of the Seaside Pavilion [formerly BIEL] as happened in the past, Hariri said: “It is a personal matter. You all know that many are trying to use the street and you know how much I am against this issue. For me, Feb. 14 is a national and emotional occasion, and for all these reasons I wanted it to be at the Downtown residence this year, to send a message to those trying to shut down the house and show them that this house is open to everyone.”

Asked who was trying to close the Downtown house, he said: “The same people who tried to close the house of Rafik Hariri by assassinating him and what followed that. Some people ‘give a one-way ticket’ but are not up to the challenge.”

Hariri, who resigned as prime minister last October under pressure of the nationwide street protests, took a swipe at the FPM, whose relationship with the Future Movement has been strained over several issues. “What did they do? Let someone show me one achievement by the Free Patriotic Movement in the national economy in the last 30 years,” he said.

Likewise, MPs from the PSP’s nine-member Democratic Gathering bloc have said they would attend the session but would not vote confidence for the government.

The latest expectations show that between 63 to 65 MPs would grant the government a confidence vote, while 47 MPs would not.

An official source said if a quorum for the Parliament session was secured, Diab’s Cabinet was guaranteed of winning a confidence vote because Hezbollah and its allies hold a parliamentary majority.

“Security forces are determined to ensure protection for MPs to reach Parliament and the confidence vote is guaranteed for the government. But the problem is in securing a quorum for the session that requires the presence of half of the 128 lawmakers plus one, 65 MPs,” the source told The Daily Star.

“In the event of any security incident that prevents MPs from reaching Parliament, there is a risk that the confidence vote session might not be held due to a lack of quorum,” the source said.

Protesters began gathering Monday night in tents set up in Martyrs’ Square under the slogan “No confidence” in preparation for their moves to prevent MPs from reaching Parliament.

“Tomorrow is a historic day. We will not allow MPs to reach Parliament. We will bring down this government. The alternative to this government is a government of independents and holding early parliamentary elections,” one protester told local television channel LBCI.

Another protester said people would be converging from all areas toward Martyrs’ Square early Tuesday to thwart the session.

Demonstrators from across Lebanon are set to join their compatriots in Beirut, with buses scheduled to depart Elia junction in Sidon early Tuesday morning