Is the U.S. beyond the point of repair? 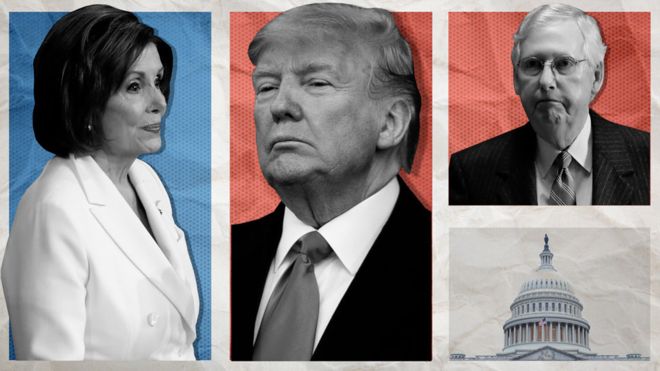 The new decade in American politics has started with a hangover that keeps on getting worse – a quickening of the downward democratic spiral we have witnessed over the past 30 years.

So much of what has gone awry has been resident in the trial of Donald Trump.

The partisan vitriol. The degradation of debate. The use of what were previously rarely used weapons – in this instance impeachment – to escalate America’s ceaseless political war.

This sorry saga has offered yet more proof that, far from being an aberration, the Trump era is a culmination.

The hyperpartisanship of Republicans and Democrats has been evident in the party-line votes to impeach and acquit. The coarseness and ugliness of political discourse we have heard every day, which prompted the Chief Justice of the Supreme Court John Robert to tell both sides to dial back the rhetoric.

Again we have witnessed the negative statecraft of Republican Senate Majority Leader Mitch McConnell, who used parliamentary procedures to bar witnesses from even appearing in the trial – a case, historians may well conclude, of jurors actively obstructing justice. McConnell managed to block Barack Obama’s final Supreme Court nominee, Merrick Garland, for almost a year. In preventing the Democratic House managers from calling witnesses, such as the former National Security Advisor John Bolton who could have completely blown up the president’s defence, he hardly broke sweat.

In their rush to impeach Donald Trump, the Democrats also decided not to fight a lengthy court battle for the right to hear testimony from Bolton and other White House aides. This opened them up to the criticism that the process was a naked political play rather than a grave constitutional undertaking.

Constantly it is remarked upon how Trump has departed from the norms of presidential behaviour, but one of the main effects of these past three years has been to destroy the shared sense of what those norms should be. As the impeachment trial underscored, Washington cannot even agree on what constitutes right and wrong. Following his acquittal, Donald Trump has claimed a Pyrrhic victory, but there is no doubt about the loser: the country he leads and has helped divide.

In some ways, the impeachment of Trump has felt like a presidential version of the OJ Simpson trial, with all the attendant media hoopla and spin albeit without the same viewing figures or suspense. Just as OJ appealed to the racial allegiance of African-American jury members, one of whom made a Black Power salute after the not guilty verdict was announced in court, Trump has relied on the partisan allegiance of obedient Republicans.

Just as OJ’s legal team railed against the Los Angeles Police Department and its rogue officer, Mark Fuhrman, Trump has complained about the Democratic “dirty cops” led by the former California prosecutor Adam “Shifty” Schiff. As with “The Juice” so with “The Donald”: the facts of the case have ultimately been secondary to the feelings aroused by it. It has turned on the question of whose side are you on?

The president’s “Read the transcript” mantra even had echoes of the OJ defence team’s “If it doesn’t fit then you must acquit” description of that bloodied black glove: a successful attempt to turn the most damning evidence into the most exculpatory. Democrats have complained that the Republicans have turned the Senate into Fifth Avenue, the place where Trump once boasted he could shoot someone without losing any support. Historians may well agree.

Trump’s victory rally in the East Room of the White House the morning after his acquittal, where Republican jurors stood to applaud, may well come to be seen as a definitive moment – when the party of Reagan truly became the party of Trump. Senators from the Grand Old Party, the GOP, have now clicked on the terms and conditions of the Trump presidency after examining for three years the fine print. They have fallen into line. Many have become his spear-carriers. Striking, too, was how the Attorney General, William Barr, got up from his seat at the event to clap and salute Trump’s legal team, suggesting the wall that should exist between prosecutors at the Justice Department and political operatives at the White House has been flattened.

So the East Room revelry felt like the crowning moment in the fifth wave of Republican radicalisation. After Goldwaterism in the mid-Sixties, Reaganism in the Eighties, Gingrichism in the Nineties and the Tea Party in Noughties, this was the triumph of Trumpism. His first tweet after his acquittal drove home this point – an animation of election placards reading Trump 2020, Trump 2024, Trump 2028, ete, etc, an age of Trump stretching endlessly into the future.

Only one Republican senator refused to play the partisan game by voting for removal. Mitt Romney’s tearful speech sounded also like a death cry of moderate Republicanism. The irony here, of course, is that the rise of Trump in 2016 was partly in reaction to Romney’s presidential candidacy in 2012.

The conservative movement was adamant that it would not be led by an establishment favourite, like Romney, again. Another irony is that on the night Romney sealed the Republican nomination in 2012, after victory in the Texas primary, Romney stood alongside Trump at his casino in Las Vegas. This came at the height of the birther scandal, and showed that even moderates such as Romney were being forced to embrace the kind of nativism that Trump had come to represent.

The State of the Union address on Tuesday night showed how toxic the air in Washington has become, from the refusal of Donald Trump to shake Nancy Pelosi’s hand ahead of his address to her ripping up of his speech afterwards. Never before have we seen such a breakdown of basic decorum, or, in modern times, the hatred it betrayed.

For me, though, the moment that encapsulated the era came when Trump awarded the presidential medal of freedom to the conservative radio host, Rush Limbaugh. The right-wing talk show host is a high priest of polarisation. Few conservatives have done more to pave the way for Donald Trump. With that primetime ceremonial, the president revealed the chronic state of America’s disunion.

Faced with a demographic death spiral in recent decades, the Republican Party has been masterful at accruing power when the ethnic make-up of America increasingly favours the Democrats. This it has done by maximising turnout among its mainly white base, by trying to suppress turnout amongst minority voters, and by using its success at the state level to gerrymander congressional districts.

The Senate’s rural bias, where a small red state such as North Dakota wields the same power as a blue state behemoth such as California, has helped a minority party that has lost the popular vote in six out of the last seven presidential elections remain in the majority. In the impeachment trial, the 48 Senators who voted to convict represent 18 million more people than the 52 who voted to acquit.

A conservative-leaning Supreme Court has offered vital assistance, with rulings such as Citizens United, which opened the floodgates for a torrent of dark campaign money from billionaire plutocrats, and Shelby County which invalidated much of the 1965 Votings Rights Act, the landmark legislation which did so much to boost black enfranchisement.

What the Trump presidency has shown is the lengths the Republican Party has been prepared to go with this win-at-all-costs ethos. Party leaders have expressed little outrage over Russia’s interference in the 2016 presidential election.

In voting for acquittal, they decided to give Donald Trump a pass in trading US military aid to Ukraine for political dirt on his Democratic rival Joe Biden.

In congratulating Mitch McConnell in the East Room pep rally, the president revealed why so many Republicans have been prepared to support Trump, whatever the moral outlay. He singled out the number of right-wing judges that McConnell has been able to confirm in the Senate, which will make the federal judiciary more conservative for decades to come. That, for conservatives, is a massive metric of success.

Election years can be times of national renewal. One thinks of the Reagan landslide in 1984, when he campaigned on the ringing theme of It’s Morning Again in America and carried 49 states, or Barack Obama’s victory in 2008, with its audacity of hope.

But the chaos of caucus night in Iowa has reminded us again of the country’s democratic decay. Even the mechanics of democracy no longer seem to work any more, a problem highlighted in the disputed 2000 election that has not yet been fixed.

On Tuesday night, we witnessed American polarisation play out in real time. During the impeachment trial it often seemed that the very idea – and ideals – of America was on the stand.

A broken politics, a broken democracy, a broken country.

Is the United States beyond the point of repair?