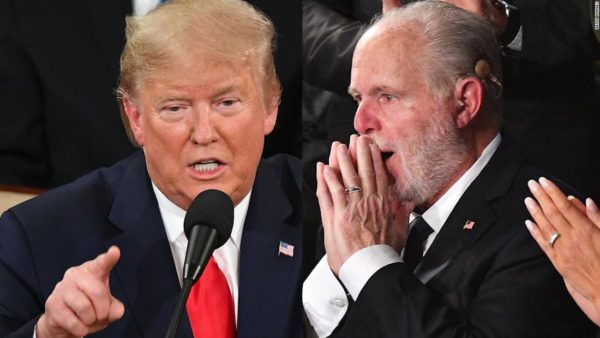 President Donald Trump was roundly criticized after he awarded conservative talk show host Rush Limbaugh, who has a well-recorded history of misogynistic and racist remarks, with the Presidential Medal of Freedom during his annual State of the Union address.

“Almost every American family knows the pain when a loved one is diagnosed with a serious illness,” Trump told the audience, referencing Limbaugh’s recent announcement that he was diagnosed with Stage 4 lung cancer in January.

After praising Limbaugh as “the greatest fighter and winner that you will ever meet,” Trump announced that he was bestowing the medal upon the radio host “in recognition of all that you have done for our nation, the millions of people a day that you speak to and you inspire and all of the incredible work that you have done for charity.”

Trump’s move was rebuked by legislators, commentators and activists, who argued that Limbaugh’s legacy of promoting racism, sexism and right-wing misinformation should not be awarded despite his tragic medical diagnosis.

Rep. Alexandria Ocasio-Cortez, D-N.Y., slammed Trump as a “virulent racist” who was undeserving of such a “sacred award.”

“He wants to assert that Rush Limbaugh is somehow on the same level as Rosa Parks, and it’s truly nauseating,” she added on Instagram. “And this is one of the many reasons that I did not go.”

ABC News chief political analyst Matthew Dowd tweeted, “I pray for Rush Limbaugh’s recovery and wish good health to him.  However, giving him the Presidential Medal of Freedom at the State of the Union address devalues the Medal, our Union, and the common good which we all should pursue and raise up.”

Walter Shaub, the former director of the Office of Government Ethics, added that “like the Joe Arpaio pardon, Trump awarding that medal to Rush Limbaugh has nothing to do with its recipient but was awarded as a message to the viciously racist, nationalist segment of the population whose votes Trump needs. It says: Stay with me, I am with you.”

Arpaio was the former sheriff of Maricopa County, Ariz., who was convicted of criminal contempt of court by pardoned by Trump in 2017.

Ilyse Hogue, the president of the pro-choice advocacy group NARAL, wrote, “Rush Limbaugh’s most infamous act was calling a young grad student a slut for testifying in favor of contraceptive coverage. A terrible diagnosis does not erase a lifetime of racism, homophobia and misogyny. A sick man deserves healthcare; a bigot does not a medal of honor.”

Limbaugh has made a number of controversial remarks during his career as a radio host. During a 2015 segment of “The Rush Limbaugh Show,” he claimed that the risks attributed to smoking were a “myth” and smokers do not face any greater health risks than people who “eat carrots.”

In addition to spreading such misinformation, he also made endless offensive remarks. Those include: claiming that all composite pictures of wanted criminals “resemble Jesse Jackson,” referring to Chelsea Clinton as the “White House dog” and arguing that feminism exists “to allow unattractive women easier access to the mainstream of society.” He has also referred to NBA teams as “gangs,” accused actor Michael J. Fox of exaggerating his symptoms of Parkinson’s Disease and said Native Americans should not be upset about genocide because “they all have casinos.”

Limbaugh coined the term “feminazis”; referred to contraception advocate Sandra Fluke as a “slut” and a “prostitute”; and described former President Barack Obama as “Barack the Magic Negro” and a “Hafrican American.” Like Trump, Limbaugh questioned whether Obama was born in the U.S. In response to reports that many detained migrants were forced to drink from toilets in 2019, he remarked that “maybe toilet water is a step up” for them.