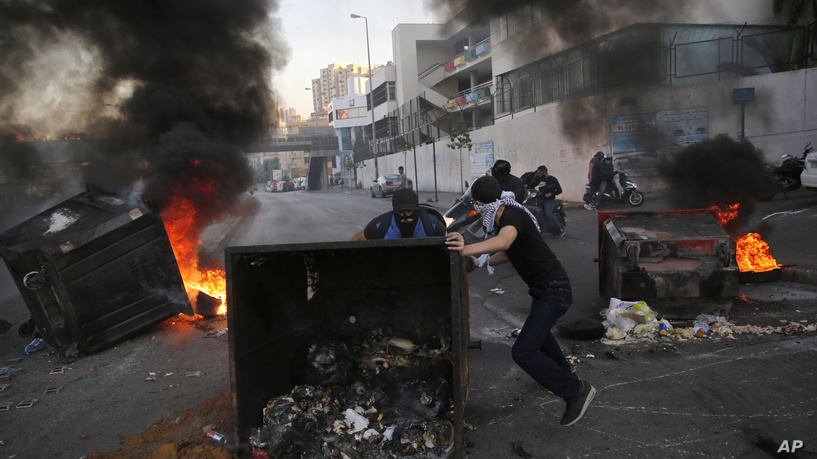 Anti-government protesters block a main highway by a garbage containers and burned tires, during ongoing protests against the Lebanese government, in Beirut, Lebanon, Monday, Nov. 4, 2019. Prime Minister Saad Hariri resigned last week, meeting a key demand of the protesters, but many are calling for more sweeping change. The government proposed a vague roadmap last month aimed at improving the economy, fighting corruption and replacing the sectarian political system with a civil state, but the protests have continued. (AP Photo/Hussein Malla)
Share:

Lebanon has been ranked the second worst country in the world to start a family, finishing above Kazakhstan, according to the “Best Countries for Raising Kids” report by the BAV Group and the Wharton School of the University of Pennsylvania.

The study, which forms part of the 2020 Best Countries rankings, was based on a survey of more than 20,000 global citizens, ranging from four regions “to assess perceptions of 73 countries on 65 different metrics”.

In light of these, the study found that Denmark scored the highest, followed by other Scandinavian countries, Sweden and Norway with Canada in fourth place. The UK came in at number 11 while the US ranked at 18.

The Danish parental leave system is considered “among the most generous and flexible in the EU.” Both parents are given 52 weeks of paid parental leave and mothers are entitled to four weeks of maternity leave before the expected due date.

Out of the 73 countries listed, Lebanon ranked 72nd with Oman, Jordan, Saudi Arabia and Tunisia included in the top ten worst countries to raise a child.

The methodology used for the survey involved participants given a “random subset of countries and country attributes to consider” which were presented in a grid whereby they were to be checked off based on perceptions of the characteristics being associated with each country. The more times an attribute-country pair was checked off in the grid, the higher the attribute score was for that country.

The explanation given for the limited choice of 73 countries were that they were narrowed down to a “statistically manageable group by comparing the performance of countries in a number of key business, economic and quality of life indicators.”

Nordic nations consistently are ranked the highest in so-called happiness indexes,  however, the same countries also feature among the world’s biggest consumers of antidepressants, particularly among Organisation for Economic Co-operation and Development (OECD) countries.