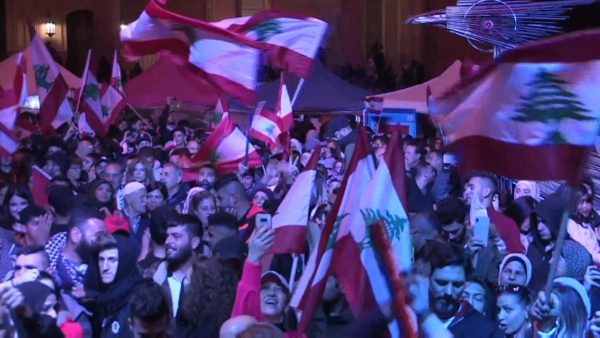 Thousands of protesters demonstrated in central Beirut and elsewhere in Lebanon on Sunday against the country’s new prime minister, saying he should abandon the post because he is a member of the ruling elite.
Share:

Lebanese Prime Minister Hassan Diab has today signed off on the 2020 state budget and referred the plan to President Michel Aoun, with 49 members of parliament voting for the budget, while 13 voted against and eight abstained.

Parliament Speaker Nabih Berri signed off on the budget earlier today while MPs from Saad Hariri’s Future Movement bloc voted against the budget, despite heading the government that originally drafted the plan.

MPs from the Lebanese Forces and Kataeb Party boycotted today’s session over the unconstitutionality of a government yet to gain a vote of confidence from the legislature, adopting a budget that was drafted by a fallen government.

The 17-page statement was initially passed by the parliament on 27 January, despite the session being surrounded by anti-government protesters determined to prevent MPs from convening.

The plan, approved by Berri today, provides between three and 100-day deadlines to carry out the policy proposals, forecasting a six per cent deficit, plans a $700 million reduction in spending, and intends to maintain public services.

However, Lawmaker Ibrahim Kanaan, chairman of the Finance and budget Parliamentary Commission, said there are concerns that projected revenues from the budget might not be realistic after three months of political deadlock has led the country into its worst economic crisis since the end of the civil war in 1990.

Alain Aoun, Free Patriotic Movement lawmaker, referring to the projected deficit, asked during today’s session “can someone tell us today, in the government, the finance ministry, anywhere, how they will finance this $4.3 billion? Will they also take it from the deposits of the Lebanese?”

The budget has been widely rejected by the people who have continued to protest over government failures to address the economic situation, with concerns that the already minimalpublic services will get cut.

State-run Electricité du Liban (EDL) reported on 7 January that it would continue to reduce hours of electricity without an increase in state subsidies, despite already failing to provide 24 hours of power per day across the country.

While, Chairman of national internet provider Ogero, Imad Kreidieh, confirmed a week later that without a release of $4 million in foreign currency, Lebanon could face a nationwide internet shutdown by the end of March.

Bank account holders are currently restricted to weekly withdrawal limits of $200, with BLOM Bank today reducing limits to every 15 days. Lebanon has a debt-to-GDP ratio of 151 per cent, one of the highest in the world, according to the International Monetary Fund.

The path out of the crisis will likely require a rescue plan, which will unlock international aid which has been pledged but never released, and possibly an IMF bailout.