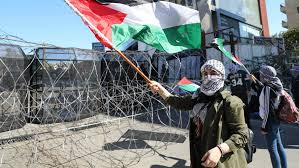 More than 200 Lebanese and Palestinians held a protest Sunday near the U.S. Embassy in Lebanon against a White House plan for ending the Israeli-Palestinian conflict

Protesters waving Palestinian flags gathered on a road leading to the embassy northeast of Beirut amid tight security by Lebanese troops and riot police.

“Death to America! Death to Israel! We will die and Palestine survive,” some of the demonstrators chanted.

The U.S. plan heavily favored Israel, granting the Palestinians limited self-rule in parts of the occupied West Bank while allowing Israel to annex all its settlements there and keep nearly all of east Jerusalem, which Palestinians claim as the capital of a future Palestinian state.

Around noon, the protesters removed the barbed wire and reached a metal fence set up by security forces. Police used what appeared to be pepper spray to hold back some of the demonstrators who were on the fence, with at least three protesters being carried away.

Later in the day, the protesters dispersed from the area without any serious clashes, apart from some stone throwing at security forces.

On Saturday, Palestinian President Mahmoud Abbas threatened to cut security ties with both Israel and the U.S. in a speech at an Arab League meeting in response to the U.S. plan. Arab foreign ministers there joined in criticizing the plan and calling it a setback to Mideast peace efforts.

Lebanon is home to tens of thousands of Palestinian refugees and their descendants. There have been protests in the country’s 12 refugee camps since President Donald Trump unveiled the proposal in Washington.