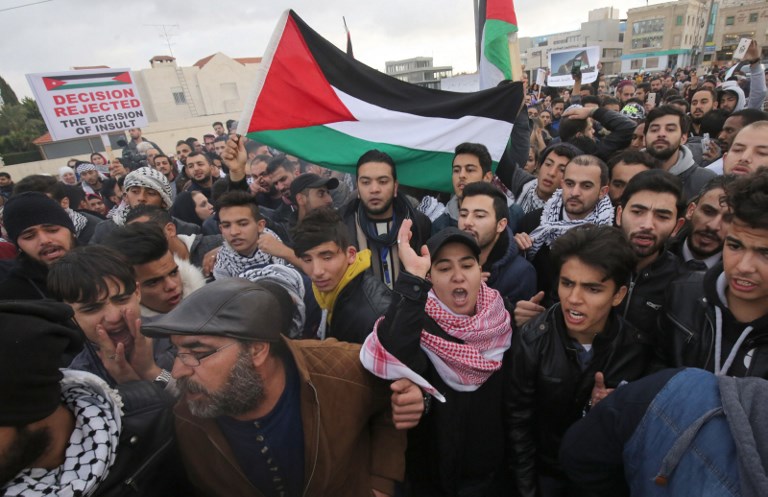 Protesters shout slogans and wave the Jordanian flag during a demonstration near the American Embassy in Amman against US President Donald Trump’s decision to recognise Jerusalem as the capital of Israel on December 7, 2017. / AFP PHOTO / KHALIL MAZRAAWI
Share:

Hezbollah said the plan is an attempt to “wipe out the Palestinian people’s rights.”

This “shameful move… could not have been made without the complicity and betrayal of a certain number of Arab regimes”, the Iranian-backed movement added.

Al-Mustaqbal Movement expressed solidarity with the Palestinian people, denouncing the deal as a “new Balfourd Declaration.”

“The deal cannot pass at the expense of the Palestinian people and their historic struggle to defend their land and sanctities, or at the expense of their legitimate rights to establish an independent state with Jerusalem as its capital,” a statement released by the Movement said.

Sidon Mufti Sheikh Salim Sousan called on mosques in the southern city to focus their Friday speech on the “Palestinian cause.”

“This Deal of the Century is ugly and reprehensible, it is totally rejected. Palestine is not for negotiations or bargaining, and it is not for sale,” said Sousan.

Palestinian refugees in the southern camps of Sidon and Tyre, and in the northern camps of Beddawi went on strike as schools were closed in protest.

President Trump claimed his peace plan for Israel and Palestine will prove to be a triumph that will last for the next 80 years, but proved it was not even viable for 80 minutes after he revealed it.

The plan grants Israel much of what it has sought in decades of international diplomacy, namely control over Jerusalem as its “undivided” capital, rather than a city to share with the Palestinians. The plan also lets Israel annex West Bank settlements.

The Palestinians called it biased and deserving to go in the “dustbin of history.”