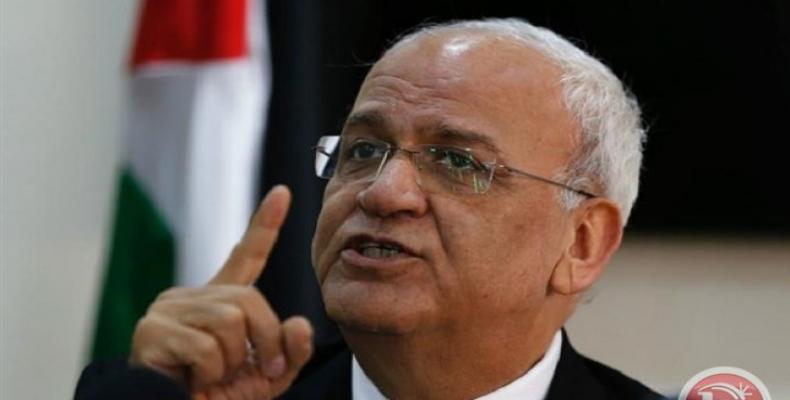 Israel’s PM says he hopes to ‘make history’ on White House trip for unveiling of Trump’s ‘deal of the century’.

In a statement on Sunday, the Palestinian Authority’s foreign ministry called for “a clear international declaration rejecting ‘the deal of the century'” that it said would endanger regional stability.

Erekat said the US deal was “an attempt to destroy the two states”, and would “open the doors of one person one vote from the river Jordan to the Mediterranean”.

If Netanyahu begins annexation of palestinian territory officially, this means Israel’s withdrawal from Oslo accords and agreements signed . It is an attempt to destroy the two States.But it will open the doors of one person one vote from the river Jordan to the midditterraen.

Sometimes called Oslo II, the interim agreement set out the scope of Palestinian autonomy in the occupied West Bank and Gaza.

Hamas leader Ismail Haniya on Sunday said the Middle East peace plan “will not pass” and could lead to renewed Palestinian violence.

“We firmly declare that the ‘deal of the century’ will not pass. The new plot aimed against Palestine is bound to fail,” and could lead the Palestinians to a “new phase in their struggle” against Israel, Haniya said in a statement.

The Palestinian criticism came as Israeli Prime Minister Benjamin Netanyahu headed to Washington, where Trump was expected to release the plan before Tuesday.

The Palestinian leadership was not invited and has already rejected Trump’s initiative amid tense relations with the US president over his recognition of Jerusalem as Israel’s undivided capital.

The Palestinians see occupied East Jerusalem as the capital of their future state and believe Trump’s plan buries the two-state solution that has been for decades the cornerstone of international Middle East diplomacy.

Netanyahu said on Sunday he hopes to “make history” during his upcoming trip to the White House for the expected unveiling of Trump’s Middle East peace plan.

Addressing his cabinet shortly before departing for Washington, Netanyahu described the current environment, characterised by close ties with Trump, as a once in a lifetime opportunity for Israel that “we must not miss”.

Trump’s plan is expected to be extremely favourable to Israel.

“We are in the midst of very dramatic political events, but the peak is still ahead,” he said.

“For three years I have discussed with President Trump and his team our security and national needs – dozens of discussions and hundreds of hours. In all of these talks, I found a receptive ear in the White House for the essential needs of the state of Israel.

“I am going to Washington with a great sense of purposes, great responsibility and great chance, and I am hopeful we can make history.”

The plan could give Netanyahu, who is in the middle of his third re-election campaign in under a year, a lift as he tries to remain in office while fighting criminal charges of fraud, breach of trust and accepting bribes.