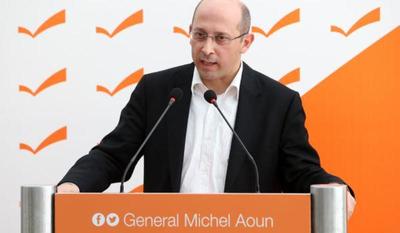 “First, the deterioration in Lebanon should be halted and then recovery measures should begin,” Aoun said in a TV interview, warning that “the failure of the rescue process would affect entire Lebanon.”

“The first phase requires foreign assistance, but we can’t go to economic conditions that would blow up the social situation,” the lawmaker added, in reference to any austerity measures that might be demanded by international financial organizations.

Calling for the privatization of the electricity sector, Aoun said he has a feeling that the “invisible hand” that is impeding power generation in Lebanon is “an oil cartel.” He did not specify

Asked whether he might run for the presidency of the Free Patriotic Movement, the lawmaker said “everything is possible.”

The current head of FPM is Gebran Bassil , president Michel Aoun’s son-in-law. President Aoun is the founder of FPM and pressured its members to elect Bassil as its head .

Bassil was singled out by the anti government protesters as the most reviled politician in Lebanon . The most popular slogan which united the protestors so far is “All of them means all of them”. For the first time, the Lebanese people united in protest against all politicians undivided by parties or a favourite politician.

He also underlined that “should the current government fail, the only solution is to go to early parliamentary elections to produce a new political situation, on the condition that the people accept it.”

Aoun also noted that Hassan Diab’s government is the “last chance government” prior to “elections that produce a new political class.”

Many analysts are of the opinion that the one sided Hezbollah backed cabinet will not be able to solve the economic situation since any help has to come from the west and Arab countries, hence an early election is the only solution that will be acceptable to the protesters who view the cabinet of PM Diab as the same coin but showing the other face of the same corrupt politicians of Lebanon