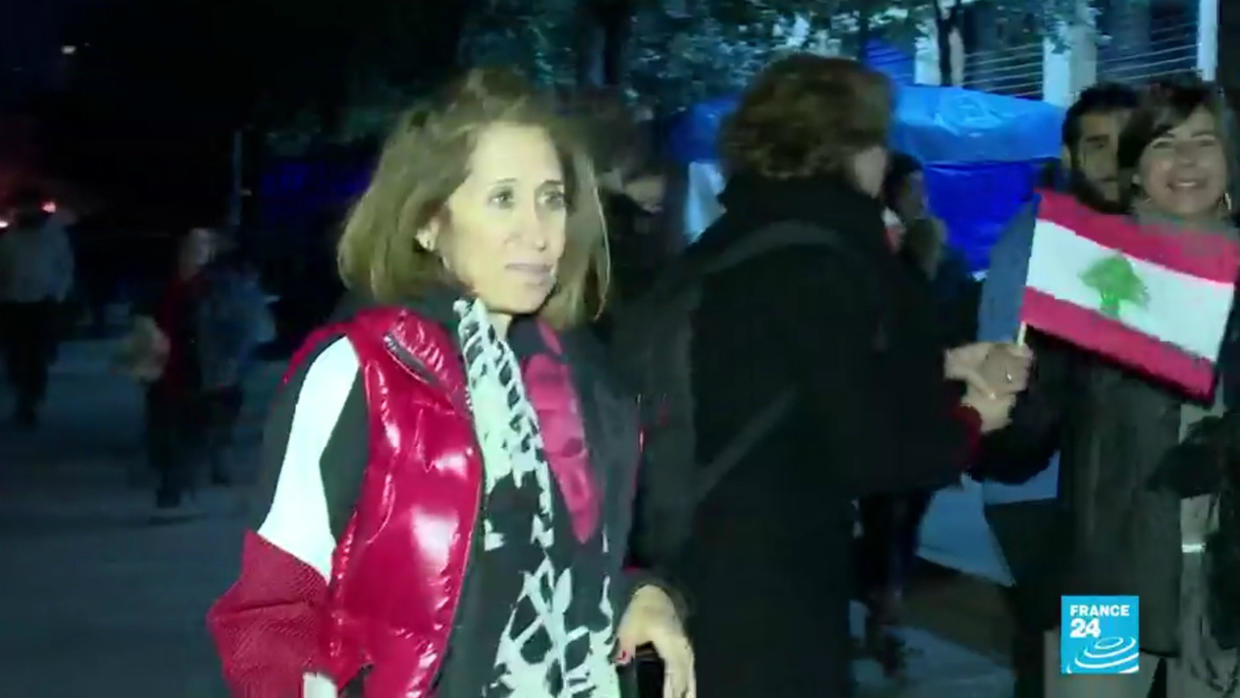 Lina Boubess became an icon of Lebanon’s protest movement when a photograph of her trying to prevent an arrest went viral last year. More than 100 days after she took to the streets demanding change, Boubess tells FRANCE 24 she’s not ready to quit – yet.

In November 2019, a photograph of an elderly Lebanese woman hugging a young protester as riot police tried to arrest him went viral on social media sites.

Wearing a bright red T-shirt topped with a trendy visor cap, the woman wrapped her arms around the young man’s shoulders, clinging ferociously on, as police yanked his arm.

It wasn’t long before Leila Boubess earned a nickname: “The Mother of the Revolution”.

Saturday marked the 100th day of anti-government protests since Lebanese citizens across sectarian, class and geographic divides took to the streets to demand a change of government and a political system that has seen entrenched elites retain power, mismanaging the country and its economy in the process.

Over the past 100 days, Boubess has joined the protests every single day and she’s seen a lot of changes during this period.

My favorite shot from this revolution by @myriamboulos |
This is Lina Boubess. Lina has been on the streets since day one. Her tears on live TV today moved us all.
Thank you for your energy Lina, we need a lot more like you ♥️🇱🇧#ثورة #ثورة_١٧_تشرين #لبنان_ينتفض pic.twitter.com/91tKWDLDbx

“It broke a lot of taboos,” she explained, walking down a Beirut street surrounded by protesters. “Before they used to divide us into sectarianism. Now no, the people are in the street they’re united. I go to the street, they don’t ask you….”

Boubess has to cut short her answers as chants of “Lina! Lina!” by young protesters, accompanied by rhythmic clapping, drowns out her reply.

She breaks into a giant grin, proclaiming, “Love you! Love you!” as a protester hugs her to even louder applause.

“I’m proud of this generation,” said Boubess, who’s just a few weeks shy of 60. “When I look at them, hope comes back. I see the passion in their eyes. They’re adamant they want a change.”

‘You have to be patient’

Lebanon’s protest movement has largely been peaceful since it began October 17, 2019. But over the past two weeks, demonstrations have turned violent, leaving hundreds wounded and dozens arrested.

Although a new prime minister, Hassan Diab, has taken over from Saad Hariri following the latter’s resignation, many protesters say the country’s new cabinet merely represents a swap of new figures representing the old vested interests.

Lebanon has one of the world’s highest debt-to-GDP ratios and economists have argued it is hard to see how the near-bankrupt country could repay its creditors.

The Lebanese pound has lost over a third of its value against the dollar in the parallel market and banks are tightening restrictions on dollar transactions amid a liquidity crunch.

Boubess though is not giving up hope. “If you want real change, you have to be patient,” she explained.

The past few days have seen several developments that have led to divisions among the protesters. Should the recent violence be a reason to step back, or should it make them more determined? Should they give the new government the opportunity to make change or are they just more of the same? The answers to those questions will determine how, and if, the protest movement continues. Either way, Boubess vows she will be there to witness it.