Trump is suddenly scared of Bloomberg , as he should be 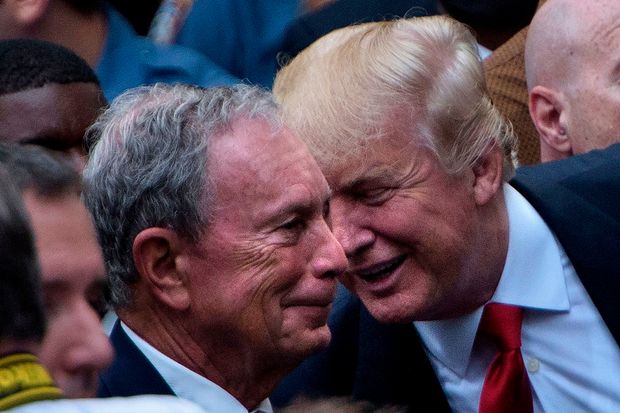 Welcome to 2020 Vision, the Yahoo News column covering the presidential race with one key takeaway every weekday and a wrap-up each weekend. Reminder: There are 11 days until the Iowa caucuses and 285 days until the 2020 election.

Mike Bloomberg probably isn’t going to win the Democratic nomination for president. But he might beat Donald Trump anyway.

The reason? Well, there are a couple billion of them — namely, the $2 billion Bloomberg plans to spend on Democrats’ behalf regardless of how he fares in the primary.

If you want to understand Trump, you need to know two things. First, he sees life as a brutal zero-sum competition: who’s up, who’s down, who’s winning, who’s losing. Which is why he’s always been obsessed with money — not only because of what it can buy but because of what it represents. “Money was never a big motivation for me,” Trump once tweeted, “except as a way to keep score.”

The second thing to know is that much of what the president says is shaped by projection — the tendency to project onto other people one’s own impulses and motivations, often as a defense against anxiety. Trump’s nicknames for opponents reflect this aspect of his personality: “Crooked Hillary,” “Lyin’ Ted” and so on.

We won’t speculate about the psychological dimensions of “Mini Mike,” Trump’s new epithet for Bloomberg, who is 5’7”. But when the president deviated Thursday morning from his daily barrage of tweets about “Shifty Schiff” and the “Do Nothing Democrats” to offer up some Twitter punditry about Bloomberg, his revealing choice of words made plain the deeper anxieties lurking below the surface.

Never mind the logical inconsistency of Trump’s analysis. (If Bloomberg’s bid really is “hopeless,” wouldn’t that be reason enough for his “foolhardy and unsuspecting Democrat rivals” to “remain silent,” regardless of what he says he will do with his money later?) The entire tweet is an exercise in wishful thinking. Trump insists that Bloomberg is tricking Democrats by pledging to spend on the party’s behalf and predicts that if he loses the nomination he will feel like such a “clown” that he will renege on his promise. But that’s how Trump would behave. The president is projecting his own personality onto Bloomberg because he doesn’t want the former New York City mayor, who is roughly 17 times as rich Trump,  to “spend money helping whoever the Democrat nominee is” — and hurting Trump’s own reelection chances.

In other words, Trump is afraid.

His fear is justified. Early on, Trump’s team said it was “unfazed” by Bloomberg’s run, and as of the end of 2019, the president had not publicly attacked his fellow New Yorker on Twitter or at one of his raucous rallies. This silence was as much strategic as anything else: Bloomberg was already plowing huge sums into primary advertising — he’s dropped a quarter of a billion dollars to date — but he was barely registering in the polls and didn’t appear to pose much of a threat.

Yet since Jan. 13, Trump has tweeted about Bloomberg six times — even though the mayor looks no likelier to win the Democratic nomination now than he did at the start of 2020.

So what happened on or around Jan. 13?

Around New Year’s Day, the New York Times reported that Bloomberg had pivoted from biographical ads to anti-Trump attack ads, adding that he planned to invest $400 million in them by Super Tuesday — which would roughly equal Barack Obama’s entire 2012 ad budget.

On Jan. 7, the Times reported that Bloomberg had just purchased a 60-second Super Bowl spot for $10 million — effectively forcing Trump to match him. “The biggest point is getting under Trump’s skin,” said Michael Frazier, a spokesman for the Bloomberg campaign.

On Jan. 10, NBC News reported for the first time that Bloomberg would “fund a sizable campaign effort through November, even if he loses Democratic nomination.”

“Awaiting the eventual nominee would be a shadow field operation across the country that’s currently unparalleled in size by any of the other candidates in the presidential race,” NBC revealed. “The roughly 500 staff members Bloomberg has committed to paying through November include those in battleground states like Florida, North Carolina, Michigan, Pennsylvania and Wisconsin, as well as in Arizona. … Bloomberg’s vast tech operation will also be redirected to help the eventual nominee, as Democrats struggle to compete with the vaunted digital operation built by Trump campaign manager Brad Parscale. Hawkfish, a digital company started by Bloomberg that’s carrying out his $100 million online ad campaign, will be retained through Election Day to help defeat Trump.”

The next day, Bloomberg told the Times that he would be open to spending a billion dollars to help another Democrat defeat Trump. “It depends whether the candidate needs help,” said Bloomberg, whose estimated net worth of $58 billion makes him the world’s 14th-richest person. “If they’re doing very well, they need less. If they’re not, they’ll need more.” Bloomberg went on to note how much he spent on charitable contributions last year: $2.8 billion.

Finally, on Jan. 18, Fox Business reported that “Wall Street executives who have spoken with Bloomberg campaign officials say they’ve been told that the former New York City mayor and billionaire businessman is prepared to spend as much as $2 billion” — emphasis added — “on either his own campaign or to help finance a Democratic nominee to unseat President Trump in the 2020 general election.”

The usual caveats apply here. Whatever Bloomberg spends on someone else’s candidacy, he won’t be allowed to coordinate with the campaign, and political scientists still disagree about how much difference spending actually makes (above a certain threshold of competitiveness). That said, $2 billion is far more than any individual candidate, party or group has ever spent on any election — and the data-driven Bloomberg campaign, which has recently ballooned to 1,000 staffers, insists that it has pinpointed precisely which messages will move “10 to 15 percent of the people who voted for [Trump] in 2016.”

“If Bloomberg does this, it will be unprecedented in American history,” Fred Wertheimer, the founder and president of Democracy 21, a nonprofit watchdog group, recently told the Times. “They will probably have more organizers than the RNC will have. They will have loads of people in the battleground states, they’ll have TV ads, they’ll have digital ads.”

“It will neutralize any financial advantages [Trump] thought he had,” Wertheimer added. “If they’re not worried, they’re kidding themselves.”

Judging by his tweets, Trump is starting to worry.