Lebanese protesters rally in Beirut to mark 100 days of demonstrations 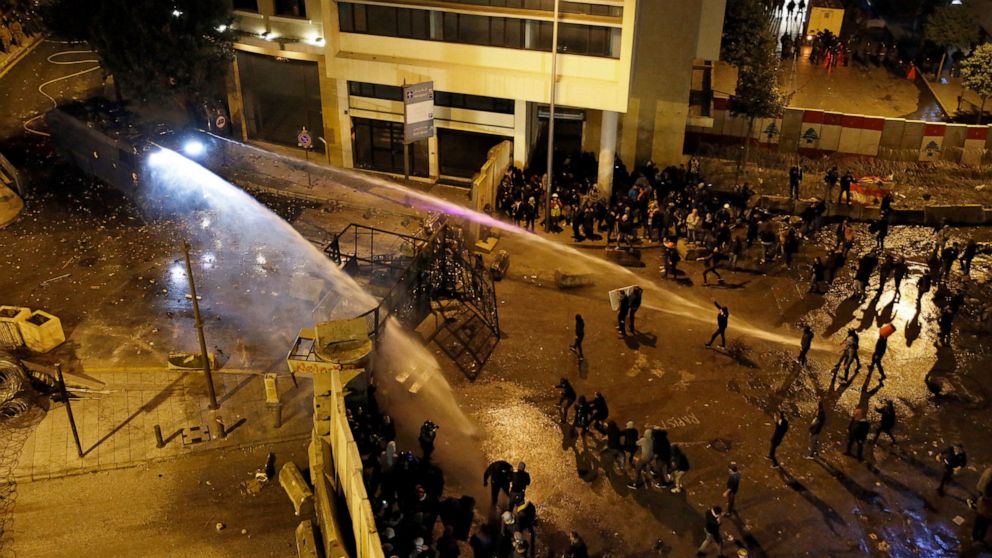 The protesters say the new Cabinet formed this week represents a corrupt long-serving political class they have been protesting against since October.

Dozens pulled at barbed wire and a metal gate erected between them and security forces guarding the central government building, known as the Serail. They hurled stones and firecrackers at security forces, who used water cannon and tear gas to push rioters back. Hundreds of other protesters filled the street leading to the building.

Blast walls and large cement blocks had been erected behind the barbed wire and soldiers stood on alert a few meters (yards) away. Some protesters scaled those walls and taunted the soldiers. One waved a large Lebanese flag.

After nearly an hour of clashes, protesters managed to breach the metal gate further. Security forces fired tear gas and then chased the protesters out of the area with intense volleys of tear gas.

A man carrying a toddler stood in front of security forces with a raised hand, screaming at security and protesters alike to stop. But he was sprayed with a stream of water, spurring a journalist to run and grab the shaken little girl from his arms and sprint away. The clashes stopped briefly.

Central Beirut has metamorphosed into a security zone as riot police and soldiers have been heavily deployed, barricades and checkpoints erected. Security measures prevented protesters from reaching the parliament area down the street, which has become a flash point in recent days for confrontations between protesters and security. Many shops in the area were installing metal sheets over their windows after clashes left some damaged.

The crowd congregated in central Beirut after a day of peaceful marches through different areas of the capital dubbed “No Confidence.” Hundreds of protesters urged people to join their rallies.

After a new government was formed Tuesday, security forces installed new barriers and metal gates around official buildings and beefed up their presence.

After more than 100 days of nationwide protesting against the country’s political class, Lebanese are divided over whether to continue protesting or give the new Cabinet a chance as the country faces its most dire economic crisis in decades.

Protesters on Saturday said the new government is a continuation of the old system. Although it is made up of experts, it still reflects the powerful political class that has dominated the country since the 1975-1990 civil war. “They are the same people,” one man shouted to a local TV station.

The new government is backed by the militant Hezbollah group and its allies who dominate the current parliament, elected in 2018. But other powerful parties, including that of resigned prime minister Saad Hariri and two Christian parties, are not represented.

The peaceful, jubilant protests that characterized the first three months of the uprising have turned violent and a worsening financial crisis is taking its toll. Many protesters Saturday sought to distance themselves from the violence, some chanting: “Our protest is peaceful.”

More than 400 protesters and 100 security forces were injured over two nights of clashes last weekend outside the parliament building. Protesters hurled stones, firecrackers and flares at security forces who responded with rubber bullets, tear gas and water cannon.