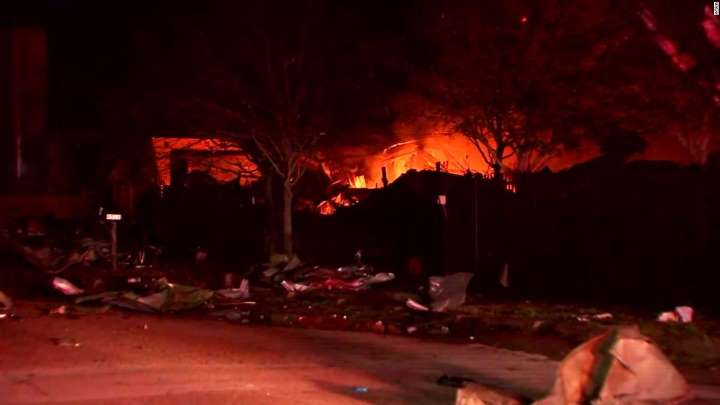 An explosion that ripped across Houston about 4:24 a.m. killed two people at Watson Grinding and Manufacturing before radiating outward and smashing into nearby homes and businesses. It knocked houses off foundations; smashed doors off frames; shattered windows; cracked sheetrock; and jerked residents awake, some as far as 14 miles away.

The firefighters and police officers who rushed to the Spring Branch-area neighborhood found debris scattered across an area more than half a mile wide a community reeling.

Police Chief Art Acevedo said terrorism or arson is not suspected, but said the department is launching a criminal investigation into the incident.

He also said the two people killed were men, and that they likely worked at the plant.

The explosion occurred near 4500 Gessner, at a warehouse owned by Watson. Police blocked off nearby streets, bordering a mile-long “hot zone” on Genard and Clay roads to the north and south and Gessner Road and Steffani Lane to the east and west.

The blast sent a powerful shockwave that woke residents living as far as Montrose and Kingwood.

“This is a very powerful blast,” Acevedo said.

First responders rushed to the scene, along with a hazardous materials team, and the Red Cross set up a shelter at a church a few blocks west of the  explosion site. Arson investigators and agents from the Bureau of Alcohol, Tobacco, Firearms and Explosives also joined the investigation.

Firefighters took one person to the hospital, Fire Chief Sam Peña said, and spent hours working to shut off propylene leaking inside the warehouse.

“The hazard has been contained, we have secured the leak from the propylene and we have no indications (of problems) with air quality at this time,” Peña said, at a 9:30 a.m. news conference.

Later in the day, HFD officials said an additional 18 people had “self-reported” to local emergency rooms because of problems breathing, cuts, or other injuries.

The shockwave left the manufacturing warehouse a crumpled shell with wreckage strewn in all directions.

“This is a disaster area right now,” Acevedo said, warning would-be thieves they would be prosecuted harshly. “Do not get caught looting, it will not be a slap on the wrist.”

City officials said the blast had damaged some 200 homes and businesses, and was so strong it knocked some structures off their foundations.

‘I WAS SHOOK’: Residents recall hearing massive warehouse explosion in west Houston, only on HoustonChronicle.com

The explosion is the latest industrial accident to hit a Houston-area company in recent years. In 2014, a chemical leak at a now-shuttered DuPont chemical plant in La Porte killed four people. A massive 4-alarm chemical fire wreaked havoc on neighborhoods in Spring Branch in 2016. The incidents occurred at two of the more than 2,500 chemical or hazardous material facilities in the Houston area.

In the hours after the blast, environmental watchdogs excoriated “another chemical explosion” that had claimed more lives in the Houston area, and called for greater government oversight to protect workers and residents living and working near industrial plants.

“It is saddening and infuriating to see more people die because of another chemical explosion,” said Elena Craft, with the Environmental Defense Fund. “These deadly tragedies cannot be the new normal in a city and region where industrial threats abound. … Enough is enough.”

Records show Watson Grinding and Manufacturing ran afoul of federal regulators in 2013, when the Occupational Safety and Health Administration fined the company about $8,000 for violations related to the control of hazardous energy and wiring problems. It was inspected again in 2015 and no violations were found.

The company’s most recent chemical inventory filed with the federal government in 2015 only listed liquid oxygen onsite. However, the Environmental Protection Agency only requires the disclosure of certain chemicals stored in quantities above specific thresholds.

Officials with the Texas Commission on Environmental Quality said they were aware of the incident and had sent staff to the area to help conduct air monitoring.

The explosion forced two Cy-Fair ISD schools, Bane Elementary School and Dean Middle School, to close for the day, according to district officials.  Spring Branch ISD will remain open, but keep students inside due to air quality concerns.

Across the neighborhood surrounding the warehouse, local business owners and residents spent the morning taking stock of the blast, which damaged numerous homes in the area.

Several windows were broken out at a Circle K store and Valero gas station at the northeast corner of Gessner and Clay, just south of the explosion site. Around 8 a.m., maintenance workers were using yellow caution tape to block off to block off the site.

“They want us to shut everything down because we’re going to have to remove glass and they don’t want anyone hurt,” said Jorge Esparza who works in facilities maintenance for Circle K.

Scott Huckabee, a volunteer firefighter from the Lake Livingston area arrived near the site around 7:20 a.m.

“There’s multiple commercial buildings damaged, multiple homes damaged. We’ve got insulation blown half a mile from the explosion site,” he said from the Circle K parking lot at the northeast corner of Clay and Gessner, just south of the explosion site.

Huckabee, who works for Frontier Services Group, a fire and water mitigation and reconstruction company, said he would be assisting residents and businesses secure their properties.

“We’ll be boarding up windows and making sure people don’t go in and start looting,” he said.

When Alondra Maldonado heard the blast, she thought the neighborhood had been hit with a bomb.

Like many others, she’d been fast asleep when the blast hit. She ran into her parents’ room, “freaking out.”

“It’s scary, I was shook because I literally always walk through there,” she said. “And my sister, she works in the mornings, so sometimes she walks through there to get to the Metro (bus stop). I imagined her walking and something happened to her. But thank God she didn’t work today.”