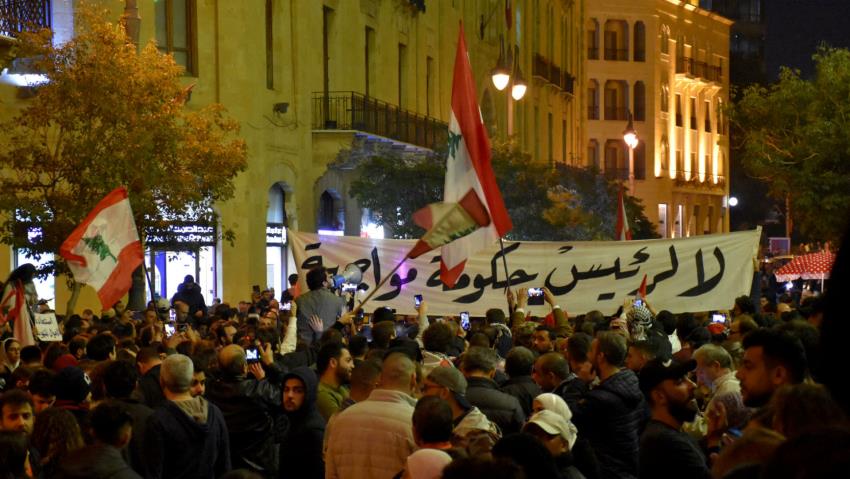 The protesters did not wait for the declaration of the government formation to plan its objection to it. In the two days preceding the formation, it announced civil disobedience and the blocking of roads
Share:

LBCI television said the meeting “did not achieve tangible results in terms of resolving the obstacles delaying the government’s formation.”

“Diab is still insisting on an 18-minister cabinet and will hold further consultations over a proposal to raise the number of ministers to 20,” LBCI added.

Al-Jadeed TV for its part said Diab “insisted on keeping the number of ministers at 18” but noted that he would accept a 20-seat government “should this proposal represent an exit from the crisis.”

MTV meanwhile revealed details about the “settlement” that is being discussed.

“A 20-minister government would be formed in which Marada would get a second Greek Orthodox minister while (Free Patriotic Movement chief Jebran) Bassil would back a Greek Catholic minister and the Syrian Social Nationalist Party would name a Druze minister,” MTV reported.

“But this proposal is awaiting the approval of the PM-designate,” MTV added.

According to analysts , this cabinet will be dead on arrival because it does not meet the demands of the protesters.

Diab has pledged to form a small Cabinet made up of “independent experts” who are not affiliated with any political parties as demanded by the hundreds of thousands of protesters who have taken to the streets since Oct. 17, calling for a change of the sectarian ruling system, fighting corruption, and the removal of the entire political class they deem corrupt and incompetent.

The leaked lineup shows a one color cabinet of Hezbollah and its allies . The allies of the Iranian backed Hezbollah militant group are the Amal Movement , headed by Speaker Nabih Berri , Free Patriotic Movement headed by FM Gebran Bassil, President Michel Aoun and pro Syrian party SSNP . According to observers the protesters will reject any such cabinet.

“These people do not want the state of Lebanon nor the welfare of its people,” Maronite Patriarch Rai said Friday in a possible reference to Hezbollah and its allies and called them ” Lebanon’s enemies “.