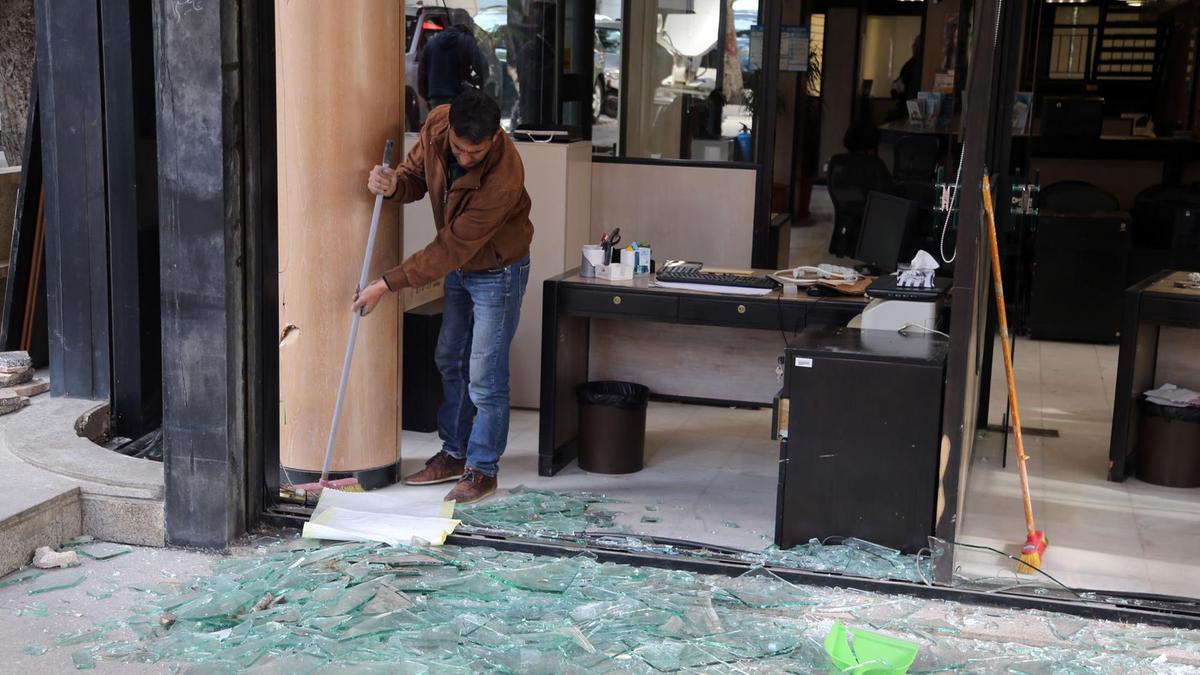 A worker clears up the shattered glass windows of a local Credit Libanais SAL bank branch in Beirut on Wednesday. Bloomberg
Share:

Many Lebanese people see banks as part of the same political class that brought the country to the brink of ruin, writes  Richard Hall

Beirut- Protesters in Lebanon have turned their ire towards banks during a “week of rage”, attacking financial institutions that many blame for the country’s worst economic crisis in decades.

Nearly 300 banks and ATMs were targeted during demonstrations across the country, according to police. There has been a large number of protests in a busy commercial district of the capital Beirut, which sparked running battles with police for several nights in a row. Some 352 people were arrested during the disturbances, before eventually being released following protests outside police stations.

Lebanon has been paralysed by large-scale demonstrations for three months, driven by anger at the country’s sectarian political class, entrenched corruption and an economic crisis.

The country is one of the most indebted in the world, with a debt-to-GDP ratio of 152 per cent. In the 2016 budget, interest payments accounted for almost half of all government spending.

The economic crisis has deepened in recent weeks as banks have imposed informal capital controls, which have placed restrictions on how much money customers can withdraw. As the value of the Lebanese pound continues to slide, many people are seeing their savings disappear.

Protesters say anger over the actions of the banks during the crisis has been fuelled by a long-held perception that the financial industry has a symbiotic relationship with Lebanon’s political class that has enriched a small, corrupt few, at the expense of the entire country.

“We believe the banks are part of the oligarchy ruling Lebanon. The banks revolve around political figures here,” says 23-year-old Ziad Eldanaf, a philosophy student, at a protest outside Lebanon’s central bank on Thursday evening.

Nour Jadid, a 23-year-old who works in marketing and was also at the protest, says no one trusts the banks to fix the mess they made.

“They can’t fix it. They have lied about how much they have in savings and now it is showing. This is why we are having this crisis. We don’t trust them anymore.”

This woman is crying at her local bank because she is not able to withdraw money, she had been waiting there since 8:00AM – The problems with the banks in #Lebanon is growing bigger day by day, the hate, the anger, as people are not able to move their accounts #LebanonProtests pic.twitter.com/IR52pV8LgG

At the root of Lebanon’s economic crisis is an unbalanced economy that was propped up for years by unsustainable financial engineering.

Lebanon relies on imports from abroad. Keeping these import costs stable required the country’s currency to be pegged to the US dollar, and maintaining that peg required a regular supply of dollars into the country.

Most of this supply came from remittances from abroad, but as they have slowed in recent years, Lebanon’s central bank pushed interest rates sky-high to entice depositors.

But it was not enough. When the financial crisis began to bite, people began withdrawing their money from Lebanon; dollars were also increasingly scarce because local banks had deposited their customers’ money in the central bank to profit from high interest rates. The dollar peg became unsustainable and the value of the Lebanese pound dropped dramatically.

The crisis has seen people’s salaries cut and the price of food and goods skyrocket. Many now fear their savings will be wiped out.

To stop the haemorrhaging of money from the financial system, banks placed informal restrictions on how much money their customers can withdraw. These controls have stoked public anger and led to almost daily confrontations and fights at banks between staff and customers.

In one video that was posted online and later went viral, a woman is seen weeping inside a bank after being told she cannot withdraw her money. In another, a man launches himself into a scuffle between police and bank customers during a confrontation.

“To the public, the banks are the face of a business elite that has capitalised and got into bed with the political elite and made a lot of money,” says Maha Yahya, director of the Carnegie Middle East Centre in Beirut.

“The banks are at the heart of this economic crisis. Their behaviour over the past few years has contributed to the situation that we are in today.”

The restrictions on withdrawals have added insult to injury, she adds.

“The feeling is now that you guys made a lot of money and yet we don’t have access to our savings, to our salaries. It’s very humiliating the way the banks are dealing with the public,” according to Dr Yahya.

“This isn’t affecting the politicians, of course,” says Eldanaf, the philosophy student. “It’s not a formal thing, the banks can give money if they know the person or they have power. It is the people who don’t have connections who are being damaged by this.”

After three months of demonstrations, Lebanon appears no closer to finding its way out of the crisis. In a country where politics is usually divided along sectarian lines, protesters have called for a complete overhaul of the sectarian political system and a technocratic government.

Lebanon’s former prime minister, Saad Hariri, resigned two weeks into the demonstrations. Hassan Diab, a little-known former minister, was nominated by Hezbollah and its political allies – which make up the largest bloc in parliament – to form a new government.

But protesters have become frustrated with the slow progress, which prompted the “week of rage”. The paralysis also prompted a rare intervention from the United Nations’ special coordinator for Lebanon, Jan Kubis.

“Another day of confusion around the formation of a government, amidst the increasingly angry protests and free-falling economy. Politicians, don’t blame the people, blame yourselves for this dangerous chaos,” he wrote on Twitter.

Among the protesters who have taken to the streets over the past three months, there now exists a keen awareness about the culprits of Lebanon’s woes, and a new focus to target them.

“We have always known what is causing the problems, but we couldn’t change anything without the numbers of people in the street,” says Jadid, the protester.

“We are facing a monster, and the only way to beat it is with another monster.”