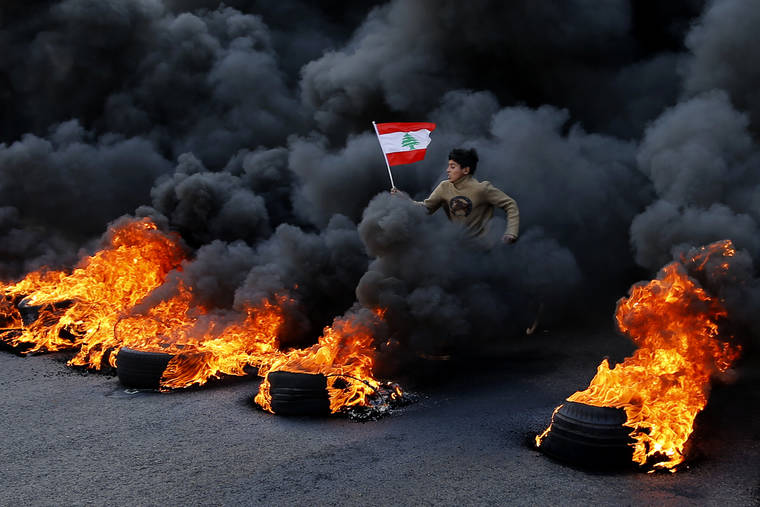 An anti-government demonstrator jumps on tires that were set on fire to block a main highway as he holds a national flag, during a protest in the town of Jal el-Dib, north of Beirut, Lebanon, today. Following a brief lull, Lebanese protesters returned to the streets, blocking several roads around the capital, Beirut, and other areas of the country on Tuesday in renewed rallies against a ruling elite they say has failed to address the economy’s downward spiral.
Share:

Protests in Lebanon turned violent for a second night on Wednesday, with dozens injured after Lebanese security forces used batons and tear gas to forcefully break up demonstrations.

Lebanon has been swept by a wave of mostly peaceful protests aimed at the country’s elite that prompted Prime Minister Saad al-Hariri to resign on Oct. 29, pushing the country deeper into economic crisis.

On Tuesday night, riots broke out in Beirut’s Hamra area, with bank facades smashed and stones pelted at security forces who fired back with tear gas.

The unrest continued on Wednesday when anti-government protesters hurled stones and fireworks at security forces outside a Beirut police station where some demonstrators were being detained from the night before.

Police dispersed the protests with batons and tear gas.

The Lebanese Red Cross said that 45 people had been injured, 35 of whom had been transferred to hospitals for treatment.

Lebanon’s internal security forces did not immediately respond to a request for comment.

In a statement caretaker interior minister Raya al-Hassan condemned the violence and called on demonstrators to remain peaceful.

Since Hariri’s resignation the country has not come up with an economic rescue plan or agreed a new government.