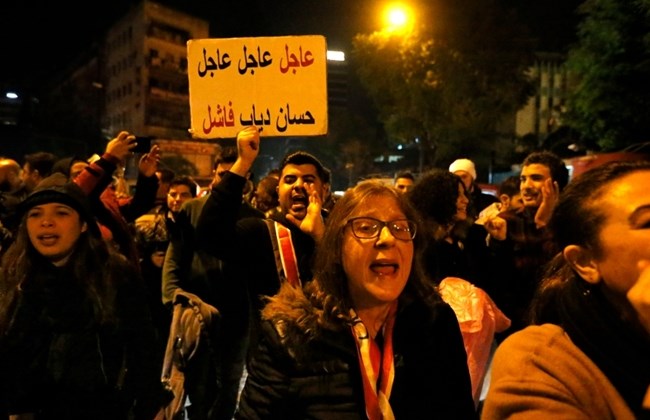 Protesters urgent urgent urgent Hassan Diab is a failure. give him 48-hour ultimatum to form a gov of experts or get out of the way
Share:

“Rebel, Beirut,” protesters chanted as they marched to the sound of drums towards the home of PM -designate Hassan Diab on Tuesday, as demonstrators blocked roads across the country in what they dubbed the beginning of a “week of wrath”.

Diab has struggled to form a cabinet since he was named on December 19, amid continued bickering among political parties.

“I want a government that can resolve the economic crisis as quickly as possible,” said Nour, a 31-year-old marcher.

Others chanted slogans condemning Diab’s designation, saying he was appointed by the same political parties against whom they have been protesting since October 17.

The protesters also set a “zero hour” for further escalation, giving the PM-designate a 48-hour ultimatum to form a government of specialists or resign.

They warned that a “new phase” would begin should their demands be disregarded.

Although protests had declined in size in recent weeks, demonstrations have been ongoing since October, increasingly targeting banks and state institutions blamed for driving the country towards collapse.

The unprecedented cross-sectarian movement since October 17 has been fueled by a crippling economic crisis, the worst since Lebanon’s 1975-1990 civil war.

The protesters are demanding a new government made up solely of independent technocrats, but analysts warn this may be a tall order in a country ruled by a sectarian power-sharing system since the end of the civil war.

The World Bank has warned of a recession that may see the proportion of people living in poverty climb from a third to half the population.

Even before the protests began, economic growth in Lebanon had slowed sharply in the face of repeated political deadlocks in recent years, compounded by the war in neighboring Syria.