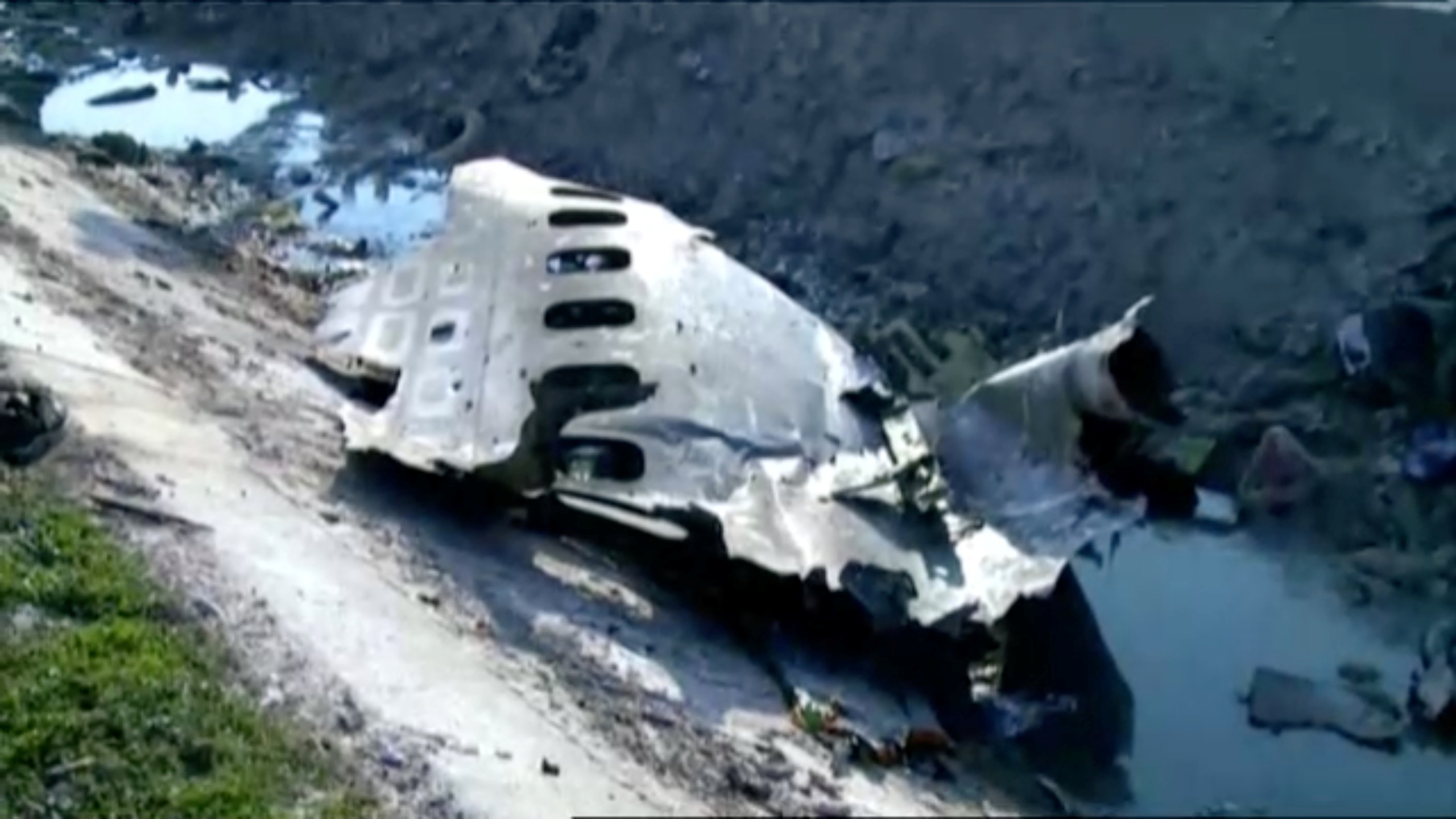 Part of the wreckage from Ukraine International Airlines flight PS752, a Boeing 737-800 plane that crashed after taking off from Tehran’s Imam Khomeini airport on January 8, 2020, is seen in this still image taken from Iran Press footage. Iran Press/Handout via REUTERS
Share:

Ukraine on Saturday demanded that Iran punish those guilty for the downing of a Ukrainian airliner and compensate victims while praising Tehran for cooperating with an “objective” investigation.

Ukrainian president Volodomyr Zelensky was due to discuss the incident with his Iranian counterpart President Hassan Rouhani at 5:00 pm local time (1500 GMT), his press office said.

“We expect Iran… to bring the guilty to the courts,” the Ukrainian leader wrote on Facebook, calling also for the “payment of compensation” and the return of remains.

Tehran admitted Saturday that it accidentally downed the Ukraine International Airlines (UIA) plane, killing all 176 people on board on Wednesday, shortly after launching missiles at bases hosting US forces in Iraq.

Tehran has invited the United States, Ukraine, Canada and others to join the crash investigation.

Kiev said that Iran had cooperated with its experts and it expects an objective probe.

Tehran has handed Ukrainian experts enough data including “all the photos, videos and other materials” to show the investigation “will be carried out objectively and promptly,” Zelensky’s office said.

“The political part of the work is finished,” it added.

It published photos of experts examining the scene and close-ups of holes in the fuselage and shrapnel damage.

Ukraine said Friday its experts dispatched to Iran had been granted access to the flight’s black boxes, debris from the plane, the crash site and to recordings of conversations between the pilot and the airport control tower.

Oleksiy Danilov, the secretary of Ukraine’s national security and defence council which is coordinating the probe, told AFP Kiev did not yet have evidence on where the missile was produced, only that it was “launched from Iranian soil.”

Zelensky said earlier that Ukraine hoped the inquiry would be pursued “without deliberate delay and without obstruction.”

He urged “total access” for the 45 Ukrainian experts, and in a tweet also sought an “official apology”.

UIA vice president Igor Sosnovsky told a news conference in Kiev on Saturday that Tehran should have closed the airport due to the escalation of regional tensions following the US assassination of a top Iranian general.

“They were obliged to close the airport. Obliged! Then shoot as much as you like.”

Iran said a missile operator shot down the Boeing 737 after mistaking it for a cruise missile at a time when threats were at the highest level.

The majority of passengers on UIA Flight PS752 from Tehran to Kiev were Iranian-Canadian dual nationals but also included Ukrainians, Afghans, Britons and Swedes

Many in Kiev have compared the crash to the 2014 downing of Malaysian Airlines MH17 killing 298 people over eastern Ukraine where pro-Russian separatists are fighting government forces.

Moscow has denied the findings of international investigators that a Russian BUK misile hit the Malaysian flight.

“Iran has shown itself to be more civilised than Russia,” pro-western Ukraine MP Volodymyr Ariev wrote on Facebook.

“Tehran has admitted its guilt in three days while Russia continues to try to get out of it.”