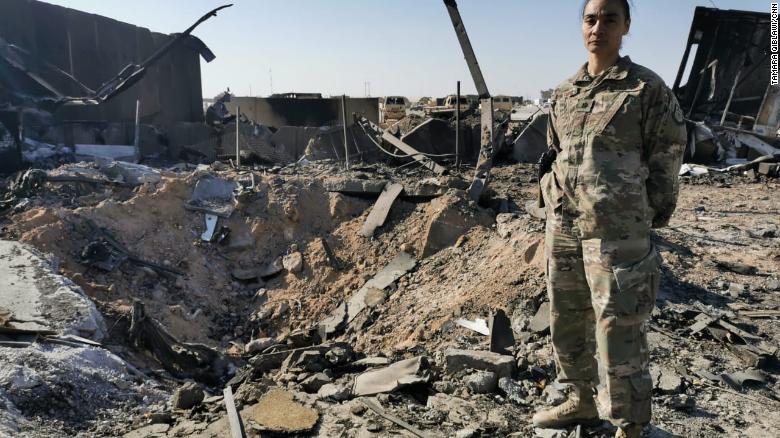 Lt. Col. Staci Colemsan said it was a “miracle” there were no casualties.
Share:

Al-Asad, Iraq – United States troops at the Al-Asad air base in Iraq were aware that an Iranian attack was imminent, allowing them to take shelter two-and-a-half-hours before missiles struck on Wednesday, CNN has been told during an exclusive tour of the devastated site. Most troops were either flown out of the base or sheltering in bunkers by 11:00 p.m. local time Tuesday — shortly before the first of four volleys of missiles began at just after 1:30 a.m. on Wednesday, officers said during the first tour by journalists of the air base.

The attack lasted around two hours, only targeting the US areas of the air base, which comprise around a quarter of the Iraqi base.Officers called it a “miracle” that there were no casualties at the blasted site, with missiles landing just a few meters from bunkers, and some essential personnel remaining outside throughout.It is the first time troops at the base have spoken in detail of the moments before the attack, revealing that they were able to seek shelter in bunkers shortly before missiles struck.US troops knew there was going to be an attack on their base — they just didn’t know what the nature of the attack would be.

The Iranian attack on the Al-Asad airbase was one of two on Iraqi military bases housing US troops on Wednesday. The attacks were in retaliation for a drone strike at a Baghdad airport that killed Iran’s most powerful military commander, Qasem Soleimani, earlier in the week.President Donald Trump said Soleimani was plotting “imminent and sinister attacks” on Americans, though he has been unable to offer a time frame on when this would be. Iraqi Prime Minister Adil Abdul Mahdi previously said Iran sent Iraq an official verbal message that an attack “had begun or would begin shortly,” on unspecified US military locations.An Arab diplomatic source also told CNN that Iraq gave advance warning to the US on “which bases would be hit” after Iranian officials passed on the information.

The first strike hit at 1:34 a.m. and after a brief pause of around 15 minutes, the next volley began. Two more volleys of missiles followed over the next two hours.At dawn, officers finally emerged from bunkers to discover the full scale of destruction.

The Al-Asad air base, which houses US troops, is one of the largest and oldest military bases in Iraq.It is located in Anbar province, a hotbed of ISIS activity in western Iraq between 2014 and 2017. Anbar was the birthplace of Sunni extremism in the aftermath of the US invasion of Iraq in 2003.In December 2018, Trump visited troops at Al-Asad. “We came in, we felt very safe coming in. It was a pretty difficult journey in certain ways, but we felt very, very good, very safe,” Trump said, according to a White House transcript.Vice President Mike Pence visited the base a year later to celebrate Thanksgiving with around 150 service members.The US military presence in Iraq has fluctuated greatly since the 2003 invasion. At its height, the US had 170,000 troops in Iraq. In 2011, former President Barack Obama withdrew US forces from the country. Around 5,000 troops were deployed to Iraq in 2014 at the request of the Iraqi government, seeking US assistance in the fight against ISIS. Troop levels have been roughly the same since.