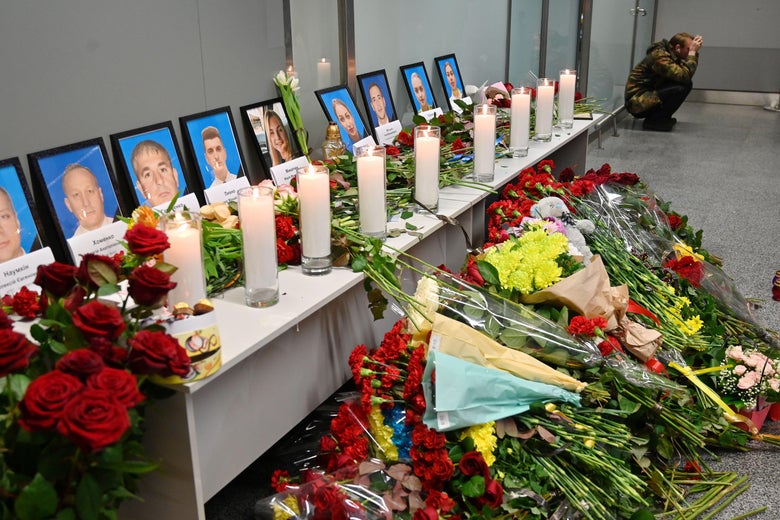 A man sits by a memorial for the victims of the Ukraine International Airlines Boeing 737-800 crash in the Iranian capital Tehran, at the Boryspil airport outside Kyiv on January 8, 2020. SERGEI SUPINSKY/Getty Images
Share:

DUBAI, United Arab Emirates (AP) — Iran’s acknowledgement that it shot down a Ukrainian airliner, killing 176 people, raises new challenges for the Islamic Republic both externally amid tensions with the U.S. and internally as it deals with growing discontent from its people.

The country did itself no favors by having its air-crash investigators, government officials and diplomats deny for days that a missile downed the flight, though a commander said Saturday that he had raised that possibility to his superiors as early as Wednesday, the day of the crash.

While its paramilitary Revolutionary Guard took responsibility, the same commander claimed it warned Tehran to close off its airspace amid fears of U.S. retaliation over Iran launching ballistic missiles at Iraqi bases housing U.S. forces. That retaliation never came, but the worries proved to be enough to allegedly scare a missile battery into opening fire on the Boeing 737 operated by Ukrainian International Airlines.

Wider tensions between Iran and the U.S., inflamed after Iran’s top general was killed in Iraq by a U.S. drone strike Jan. 3, have for the moment calmed. However, President Donald Trump vowed to impose new sanctions on Tehran and on Friday, his administration targeted Iran’s metals industry, a major employer. Meanwhile, thousands of additional U.S. forces remain in the Mideast atop of the network of American bases surrounding Iran, despite Tehran’s demands the U.S. leave the region.

That sets the stage for Iran’s further steps away from its 2015 nuclear deal with world powers, an accord Trump unilaterally withdrew the U.S. from in May 2018 over his concerns it didn’t go far enough in restraining Tehran. Iran said after the targeted killing of Gen. Qassem Soleimani that it would no longer abide by any of its limits, while saying United Nations inspectors could continue their work.

Further steps could spark an Israeli strike if it feels Iran is close to developing a nuclear weapon, something Tehran denies it wants but the West fears could happen.

Iran through Foreign Minister Mohammad Javad Zarif has sought to offer legal justifications for its decisions following Soleimani’s death, including missile strikes on Iraqi bases housing U.S. troops that caused no casualties. Now the country must contend with repercussions of its officials’ wrongheaded denials in the days after the plane crash.

“There has been no missile launched in that area at that time,” said Hamid Baeidinejad, Iranian ambassador to the United Kingdom, in an interview Friday with Sky News, calling further questions on the allegation “absolutely unacceptable.”

Then the story changed early Saturday morning, with Iran’s general staff of its armed forces saying the flight had been “targeted unintentionally due to human error.”

“In my statement yesterday to the UK media, I conveyed the official findings of responsible authorities in my country that missile could not be fired and hit the Ukrainian plane at that period of time,” he wrote. “I … regret for conveying such wrong findings.”

Yet even the army statement itself raises questions, as it said the flight moved “very close to a sensitive military spot” belonging to the Guard.

“The altitude and the direction of the flight’s movement were like an enemy target, so the aircraft was targeted unintentionally due to human error,” the statement read.

That’s despite flight data for every Ukrainian International Airlines flight out of Tehran since early November show Wednesday’s flight followed a similar altitude and flight path, according to flight-tracking website FlightRadar24. Planes leaving Imam Khomeini airport routinely take off going west as the Ukrainian flight did.

Nine other flights flew out of the airport early Wednesday morning before the Ukrainian airliner as well without encountering trouble. The Guard claims it asked Iranian authorities to shut down airspace in Tehran amid the ballistic missile strikes and fears of reprisals, but nothing happened.

Analysts have questioned the decision not to close Tehran’s airspace in the days after the shootdown.

“The first thing a country should do in case of escalation of the military conflict is to close the sky for civilian flights,” said retired Ukrainian Gen. Ihor Romanenko, a military analyst. “But this entails serious financial losses, fines and forfeits, therefore a cynical approach prevailed in Iran.”

The Guard has wide autonomy in Iran. It prides itself on its aggressive posture, whether having tense encounters with the U.S. Navy in the Persian Gulf or shooting down a U.S. military surveillance drone last summer. Concerns about that aggression saw the U.S. Federal Aviation Administration reissue a warning about flying over Iran just days before the shootdown, warning that “misidentification” remained a risk.

That Iran’s conventional military — long limited in the years since the 1979 Islamic Revolution by purges and obsolete equipment — issued the report shows the rivalries between the services. The Guard’s own position could be challenged, though it maintains a strong grip on Iran’s security and economic sectors.

The U.S. did not retaliate the night of the ballistic missile strikes on Iraqi bases housing U.S. troops. However, that has not stopped Iranian officials like Zarif and others who sought to try to blame “U.S. adventurism” for Iran shooting down the airplane.

That may not fly with the Iranian public, already battered by economic sanctions and openly protesting in recent protests. Saturday night, hundreds gathered at universities in Tehran to protest the government’s late acknowledgement of the plane being shot down. They demanded officials involved in the missile attack be removed from their positions and tried. Police broke up the demonstrations.

EDITOR’S NOTE — Jon Gambrell, the news director for the Gulf and Iran for The Associated Press, has reported from each of the Gulf Cooperation Council countries, Iran and other locations across the world since joining the AP in 2006.