‘We are in a dark tunnel’: Lebanese fear mainly economic collapse 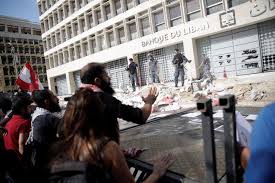 “Now we are in a dark tunnel and we don’t know what is happening or where we are going.”

So said an old friend and driver in Beirut as Iran and the U.S. faced each other down in the immediate aftermath of the killing of Maj.-Gen. Qassem Soleimani, the head of Iran’s elite Quds Force, in a U.S. drone strike in Baghdad a week ago.

He wasn’t referring to that crisis though. Lebanon has too much history perched on the edge of wider regional conflicts to be too rattled by fears of another.

He was talking about Lebanon’s economic and financial crisis, the worst since civil war ravaged the country between 1975 and 1990.

The Lebanese pound has depreciated by more than 30 per cent against the U.S. dollar since September.

And capital controls imposed by the banks are drastically limiting how much money people can withdraw, leaving many struggling to pay rent and put food on the table.

Ask people on the streets here about “the situation” and that’s what they think you’re talking about.

“The most dangerous thing in Lebanon is economic collapse,” said Makram Rabah, a political analyst, historian and lecturer at the American University of Beirut.

Historian and political analyst Makram Rabah says the top concern in Lebanon isn’t the tension and violence between the U.S. and Iran in the region, it’s the risk of economic collapse. (Stephanie Jenzer/CBC)

Lebanon has been without a government since the end of October, when protests against corruption and mismanagement forced the resignation of Prime Minister Saad al-Hariri.

The Sunni leader of the Future party, whose father, Rafik Hariri, was assassinated in 2005, is allied with Western nations and the Gulf states.

“They’re acting so selfish — all of them,” said 21-year-old student Sarah Ayoub, referring to the political elite she demonstrated against.

The protests were remarkable in that they crossed the sectarian lines that tend to define Lebanese politics, drawing demonstrators from the Sunni, Christian, Druze and Shia communities. They were united in their opposition to what they see as rampant cronyism, nepotism and influence peddling.

“We have to change the system and the laws so that there’s less favouritism,” Ayoub said. “And if we’re all equal in that matter, without someone having an advantage because of who they know, then something will improve.”

Rabah focuses the blame on Iran and its Lebanese acolyte, Hezbollah, the Shia paramilitary group and powerful political party that exerts considerable sway in Lebanon.

“Iran has hijacked these states from within, which has exposed their economies,” he said, referring also to Iraq, where anti-corruption protests were fuelled in part by anger over Iranian meddling in the country’s affairs.

Iran has funded militias inside Iraq. It has also helped arm and fund Hezbollah in Lebanon, boosting its power.

Before his death, Soleimani was accused of ordering a deadly crackdown on the protests in Baghdad.

“Soleimani is someone who was spreading chaos and destruction in the region,” said Rabah. “I do not support any kind of assassination, but at the end of the day, he got what he deserved in the sense that you live by the sword, you die by the sword.”

But in south Beirut, Hezbollah heartland, there are huge billboards bearing Soleimani’s image hanging from freeway overpasses and on the sides of apartment buildings, sharing the streets with pictures of Iran’s ayatollahs.

“[Soleimani] is a loss because he has been fighting against terrorism and ISIS in Lebanon and Syria and Iran,” said Ahmad Nasser, a father out walking with his nine-year-old daughter on Hadi Nasrallah Boulevard.

The street is named after Hezbollah Secretary General Hassan Nasrallah’s son, who was killed during a guerrilla raid against Israeli forces in southern Lebanon in 1997.

Nasser is also worried about the country’s economy, but he says Hezbollah must be a part of any solution.

“Hezbollah is a part of the social composition of Lebanon and has to be in government,” he said.

Nasser supported the anti-government protests in the fall but says he has since changed his mind, fearful of a power vacuum developing.

It could also be because the man chosen to lead a new government, Hassan Diab, has the backing of Hezbollah.

Diab has so far failed to win support from al-Hariri, or from Christian factions worried that his association with Hezbollah, already the target of U.S. sanctions, will deter much-needed international investment in Lebanon.

After Soleimani’s death, Nasrallah warned that U.S. soldiers would be returned home in coffins in retaliation.

Earlier this week, Iran launched missile strikes against military bases in Iraq housing U.S. troops, none of whom were injured. Hours later, a Ukraine International Airlines flight crashed shortly after taking off from Tehran, killing 176 people, including 63 Canadians. Both Canada and the U.S. believe an Iranian missile shot down the plane — a claim Iran denies.

Like the United States, Canada considers Hezbollah a terrorist group.

But it is also an important part of the social fabric in large parts of Lebanon.

“They’re not going away. It’s not like there are 10 people and we can deport them,” said economist and political analyst Kamel Wazne.

“They have representatives in parliament and municipalities and they’re a powerful organization and it’s very well structured.”

Wazne says Lebanon will count on the Lebanese population abroad to help the country out of its economic crisis.

There have also been calls to create a government of experts to help solve the problem.

But 21-year-old Ayoub doesn’t have much confidence that what’s currently being negotiated is much more than a portfolio shuffle.

“We were on the street for 70 days and we still couldn’t [overthrow] them,” she said.

When she does turn her mind to the recent escalation of tension between Iran and the U.S., she says American President Donald Trump has done well for himself by putting his country first.

Ayoub says she’d like to see Lebanon’s leaders focus more on putting the country and its people ahead of politics.

“If politicians in Lebanon were behaving the same way that Trump is behaving, we wouldn’t have revolted against them.”

*Margaret Evans is a correspondent based in the CBC News London bureau. A veteran conflict reporter, Evans has covered civil wars and strife in Angola, Chad and Sudan, as well as the myriad battlefields of the Middle East.