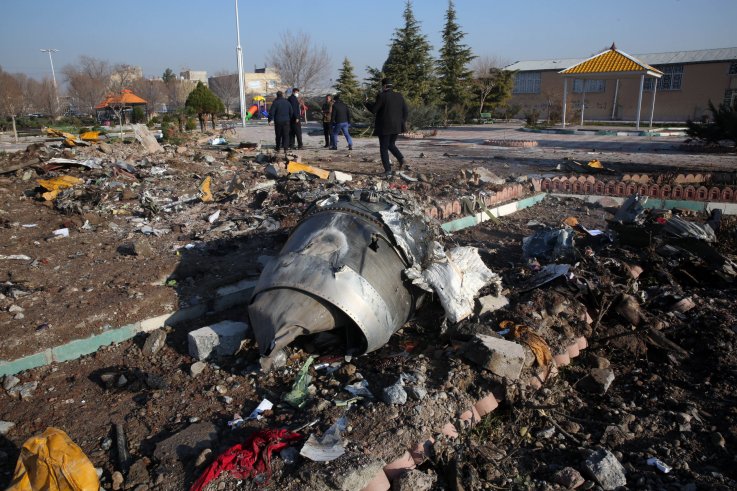 Flight PS752: Rescue teams work amidst debris after a Ukrainian plane carrying 176 passengers crashed near Imam Khomeini airport in the Iranian capital Tehran early in the morning on January 8, 2020, killing everyone on board. AFP/GETTY IMAGES
Share:

Iran’s military suffers from poor command and control, a senior U.S. official has said after Iran admitted its armed forces accidentally shot down a Ukranian Airlines flight departing Tehran, killing all 176 people on board.

After Iran initially denied reports that one if its missiles hit the aircraft near Tehran on Wednesday, its military announced on Saturday morning that it brought down Ukraine International Airlines flight PS752 “unintentionally due to human error.” The crash shortly after the Iranian military launched ballistic rockets at a U.S. base in neighboring Iraq, and the republic’s air defense units were on high alert. The missile attack came after a U.S. drone strike in Iraq ordered by President Donald Trump killed Qassem Soleimani, the head of Iran’s Revolutionary Guards Quds Force.

An unnamed senior U.S. administration official told the The New York Times on Friday that the Iranian military has poor command and control, which he said was evidenced by the crash. He claimed the capabilities of the Iranian military can be overestimated by analysts in the West, and that there is often confusion across the military as communication between officials and units is below par.

Rouzbeh Mirembrahimi, a consultant with the United Nations and an independent Iran analyst based in the U.S., told The New York Times: “This tragedy undermines the image Iran has cultivated as a military power and weakened it significantly both regionally and internationally.”

As early as Thursday, U.S. and Iraqi officials told Newsweek on a condition of anonymity that they believed an Iranian missile system had shot down the Ukraine flight by mistake.

Iran’s military said in a statement published by the official IRNA news agency that its airforce defense units were on high alert in the wake of Soleimani’s death.

In “such a sensitive and critical situation” the Ukraine Airlines flight “moved very close to a sensitive military spot” belonging to Iran’s Revolutionary Guards, it said. The “altitude and the direction of the flight’s movement were like an enemy target,” the statement read.

He tweeted: “Armed Forces’ internal investigation has concluded that regrettably missiles fired due to human error caused the horrific crash of the Ukrainian plane & death of 176 innocent people.

He wrote: “The Islamic Republic of Iran deeply regrets this disastrous mistake.

“My thoughts and prayers go to all the mourning families. I offer my sincerest condolences.”

The Iranian foreigh affairs minister Javad Zarif went further, suggesting indirect responsiblity for the crash lay with the United States. “A sad day,” he tweeted. “Preliminary conclusions of internal investigation by Armed Forces: Human error at time of crisis caused by US adventurism led to disaster.”

He added: “Our profound regrets, apologies and condolences to our people, to the families of all victims, and to other affected nations.”