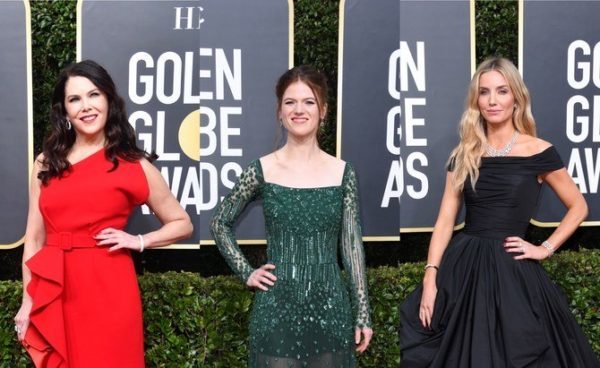 Hosted by Ricky Gervais, the ceremony awarded the year’s best and brightest in television and film, as decided by the Hollywood Foreign Press Association.

Honored actors included Egyptian-American Ramy Youssef, who took home the award for Best Actor in a Comedy Series, making him the second consecutive actor of Arab descent to win the prestigious accolade.

But it wasn’t just Arab actors that got us talking; the elegant and glamorous dresses on the red carpet that were created by our region’s talent were worthy of their very own awards too.

“Games of Thrones” actress Rose Leslie arrived on the red-carpet arm-in-arm with her co-star and real-life husband Kit Harrington wearing an emerald beaded long-sleeved evening gown with a sheer skirt from Lebanese couturier Elie Saab — whom she tasked with creating her wedding dress in 2018.

English actress Annabelle Wallis also turned to the Middle East for her red-carpet ensemble, opting for a black ruched off-the-shoulder ballgown from Zuhair Murad. She accessorized the fairytale-worthy look with diamonds aplenty.

Lebanese designers also found a fan in “The Morning Show” actress Janina Gavankar, who wore a  black floor-length Georges Chakra dress that boasted bright blue puffy sleeves; and “The Vampire Diaries” star Kat Graham, who turned heads in a red Georges Hobeika gown that featured a cut-out on the bodice and a thigh-high slit.

When it came to the men on the red carpet, they were just as stylish as their female counterparts. Egyptian-American actor Rami Malek arrived to the annual ceremony with his partner Lucy Boynton, wearing, what else? A Saint Laurent tuxedo.

The actor, who was nominated for Best Actor in a Television Drama Series, was recently announced as a new brand ambassador of the Parisian label, starring in the French luxury Maison’s Menswear campaign for Spring 2020.