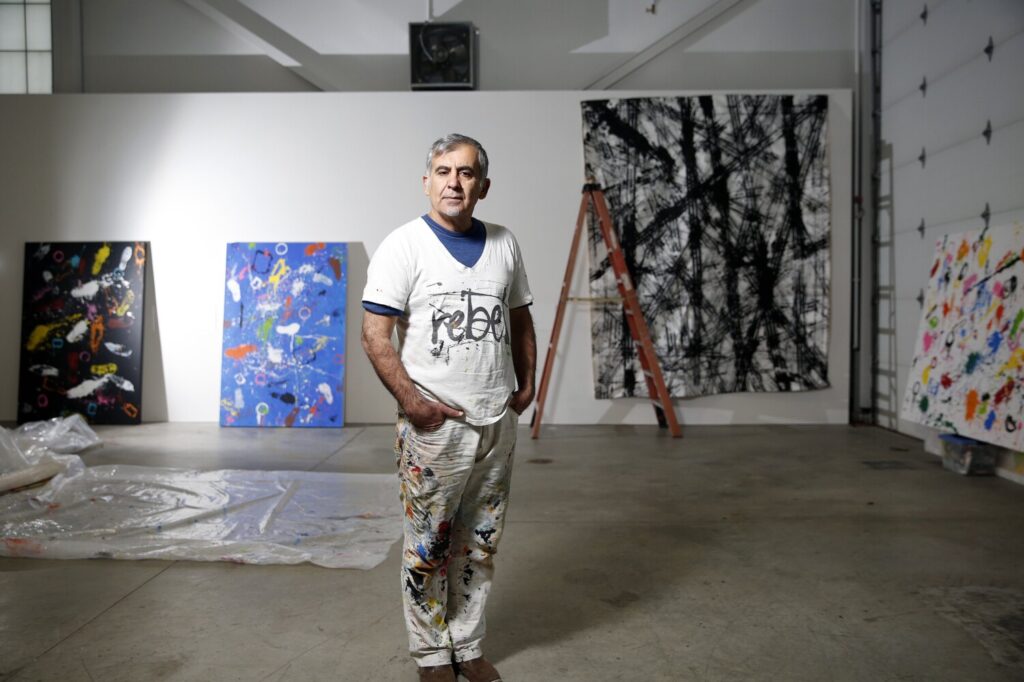 The Iraq native and Portland resident is channeling the energy of Arabic script for his ‘Rebel’ project.

Kifah Abdulla has carried many labels throughout his life. Soldier. Prisoner of war. Refugee.

“Those titles are a burden and a pain,” said the 63-year-old poet and artist who lives in Portland. Abdulla has a few new titles now that are easier to bear: U.S. citizen, artist.

A native of Iraq, Abdulla has been a United States resident for eight years, after spending most of the previous two decades as a refugee in Jordan and Holland. He arrived in the U.S. and in Maine in 2011, and became a U.S. citizen in 2016. Though the conditions of his life have been dictated by the actions of politicians, Abdulla does not consider himself a political person. He pays attention to politics and the impact of the decisions of politicians on the people he loves, in the U.S. and elsewhere. He considers himself an artist and educator, and feels obligated to act on his knowledge so he can improve the lives of people in his community.

Abdulla has given himself yet another label since he began an art-making binge this fall: Rebel. He’s begun a project called “Rebel: Take Action,” which involves making and presenting his text-based art, propelled and pulsed by the energy of Arabic script, wherever and whenever he can.

He’s paying for his project by selling “Rebel” T-shirts, with script in English and Arabic. He performed his poetry as a guest of the Palaver Strings, when the string orchestra toured Maine in November with its Welcome Home concerts of Maine immigrant stories, and is publishing a book about his experiences.

Beginning in late spring, he will show his work at the Ketchum Library Gallery at the University of New England at Biddeford in conjunction with Mark Jamra and Neil Patel of JamraPatel, Portland graphic designers who have developed typefaces for alphabets used through Africa. The exhibition, “Alphabet City: Art, Culture, and Letterforms,” will open May 30.

“As an artist, I have a powerful voice and I am responsible to defend human rights and talk about mass shootings,” he said. “I was graduated from college as a biologist and I feel it is my responsibility to talk about pollution and climate change. Some people unfortunately look to these issues politically. In fact, these issues concern all people regardless of their political affiliation. But if some people look to my work being political, there is no problem and I don’t mind.”

Abdulla now keeps his studio in Biddeford, where the nonprofit arts organization Engine invited him to participate in a maker fair in November. He moved his studio soon after.

At the maker fair, he helped create a community mural and taught people how to write their names in Arabic. He struck up a friendship with Tammy Ackerman, Engine’s executive director and founder. “I like the spirit around his ‘Rebel’ initiative,” Ackerman said. “It’s really community-minded and it’s a connectivity piece. He has such a warm personality, he could be a bridge between communities for greater understanding.”

Abdulla makes large-scale, abstract paintings that are physical, colorful and textural. A teacher of Arabic language, Adbulla incorporates the beauty and form of Arabic calligraphy in his paintings, which are based in the formal language of abstraction and expressionism and also reference the historical Muslim art-making practice of calligraphy. His paintings carry visual force and vitality, and he presents them not as art to be read in a literal sense but art to be experienced in real time.

While living in Iraq, Abdulla was an activist for peace and human rights, and served against his will in Saddam Hussein’s army in the war with Iran, satisfying his country’s requirement for compulsory military service. He was taken prisoner by Iran during the war, and spent eight years in captivity, mostly in Tehran. He was tortured as a prisoner, and nearly died, he said. When the war ended, he was sent home to Baghdad, where he said he was surveilled by the Iraqi government because of his activism.

After caring for his elderly mother, who implored him to stay in Iraq, he left his country in 1996, beginning a long journey to the United States. He lives in downtown Portland, and teaches Arabic at Southern Maine Community College and calligraphy at Maine College of Art.

His work as an educator supports his work as an artist. Abdulla spent much of this fall working in borrowed warehouse space on the edge of Portland’s West End. He covered the floors and walls with plastic so he wouldn’t make a mess, and placed hundreds of linear feet of canvas throughout the space. His then covered the canvases with paint, applying it with fury, aggression and force as he worked through his emotions.

He covered car tires in black paint, then rolled those tires across the canvas. He attached barbed wire to paintings to suggest the conditions of those imprisoned illegally. In others, he painted the number 283 over and over again, representing the number of U.S. residents killed in mass shootings at the time.

He collected the shoes of men, women and children, dipped them in paint and hurled them against the canvas, leaving splashes and drips to dry. Iraqis speak with their shoes when they are angry, he said, recalling the Iraqi journalist who was so angry at then-U.S. President George W. Bush he hurled his shoes at him during a 2008 news conference in Baghdad.

“We teach our children to hide and we give a green light to the mass shooter,” he said. “I am not OK with that. That is not OK. We need to take good action, because without good action, change will never be achieved. I do not want to just create awareness. I want to create action.”

And so he throws paint-covered shoes with all his might and allows the paint drip and pool. He makes art to settle his anger.

Hilary Irons, UNE’s gallery and exhibitions director, wrote in an email that Abdulla shows “a remarkable lack of fear in the studio” and consistently makes art-historical connections that bridge American and European Modernism and non-Western precedents through his use of calligraphy. As an Iraqi-American, his perspective is relevant to all Americans who are connected to Iraq through our common history, she said.

“Here in Maine, it is important that we have access to the work of artists like Kifah, to bring into focus both this shared history and the experiences of our neighbors who came here from Iraq and elsewhere around the world,” Irons wrote. “At the same time, Kifah is not a representative of the Iraqi community. He speaks for himself, with a visual voice that is unique and specific. By keeping the focus on the conceptual form and content of his work, instead of directly illustrating his life experience, he functions as an autonomous individual. The importance of his voice comes from this specificity of purpose, not because it stands for the experiences of others.”

Abdulla considers his art an act of rebellion, an act of defiance. In Iraq, he got in trouble for speaking out. In the United States, it’s his obligation.