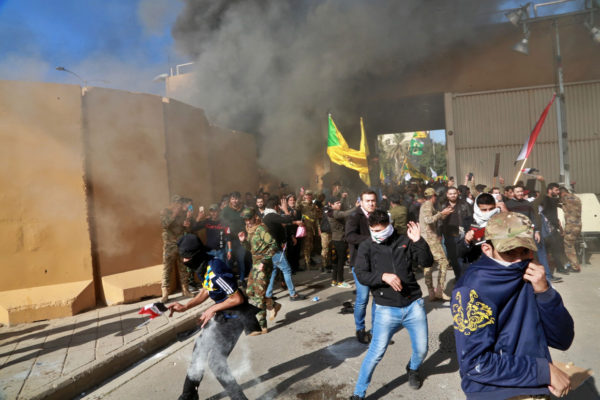 President Donald Trump on Tuesday blamed Iran for a breach of the U.S. embassy compound in Baghdad, asserting that the Islamic Republic “will be held fully responsible” for the siege on the heavily guarded American facility.

The words of warning from the president came after U.S. forces launched a series of airstrikes over the weekend targeting an Iranian-backed Iraqi militia, which the administration claims perpetrated a rocket barrage that killed an American defense contractor at a military compound in northern Iraq.

Tensions between Tehran and Washington have continued to play out in Iraq this week, reaching a boiling point in Baghdad on Tuesday as dozens of Iraqi Shiite militiamen and their supporters broke into the American embassy compound.

“Iran killed an American contractor, wounding many. We strongly responded, and always will,” Trump wrote in an early morning tweet. “Now Iran is orchestrating an attack on the U.S. Embassy in Iraq. They will be held fully responsible. In addition, we expect Iraq to use its forces to protect the Embassy, and so notified!”

The mass of protesters in Baghdad, inflamed by the recent U.S. airstrikes, shouted “Death to America” and other chants outside the embassy, and Iraqi security forces made no effort to stop their march to the compound after a funeral held for those killed in the retaliatory American attack, according to the Associated Press.

Iraq’s apparent reluctance to quash the demonstrations followed a statement by the government Monday condemning the Trump administration’s airstrikes, which it charged were “in violation of the sovereignty of Iraq.”

The State Department has already faulted the Iraqi government for allowing the Iranian-backed Kataib Hezbollah militia to attack American outposts, and Iraq’s response to the ongoing crisis in Baghdad is likely to worsen the diplomatic relationship between the two nations as the U.S. continues to move to counter alleged aggression by Tehran.

“To those many millions of people in Iraq who want freedom and who don’t want to be dominated and controlled by Iran, this is your time!” Trump tweeted several hours after his initial post, perhaps alluding to recent anti-Iran protests by Iraqis railing against Tehran’s influence in the country.

Later Tuesday afternoon, the White House announced in a brief statement that the president had spoken with Iraqi Prime Minister Adil Abdul-Mahdi about “regional security issues,” and that Trump “emphasized the need to protect United States personnel and facilities in Iraq.”

Secretary of State Mike Pompeo also spoke by phone Tuesday with Abdul-Mahdi and Iraqi President Barham Salih, a State Department spokesperson said in a statement, and “made clear the United States will protect and defend its people, who are there to support a sovereign and independent Iraq.”

The two Iraqi leaders “assured the Secretary that they took seriously their responsibility for and would guarantee the safety and security of U.S. personnel and property,“ the spokesperson said.

In messages posted Tuesday to the Iraqi government’s official Twitter account and attributed to the prime minister, Abdul-Mahdi said: “While we condemn the US air strikes on Iraqi military units, and acknowledge that symbolic funeral marches for the martyrs is a solemn act of remembrance, those taking part must stay away from diplomatic buildings and compounds.”

Abdul-Mahdi added that Iraqi security forces “will respond to any act of aggression or harassment against foreign embassies in Iraq, and those responsible will face the full force of the law.”

A State Department spokesperson said there has been no breach at the Baghdad embassy, that American personnel are secure and that there are no plans to evacuate the facility.

The spokesperson added that U.S. Ambassador to Iraq Matthew Tueller, who has been on previously scheduled personal travel for more than a week, is now returning to the embassy.

“We are closely monitoring the situation in Iraq and call on the Government of Iraq to protect our diplomatic facilities per their obligations,” the spokesperson said.

Although no one was immediately reported hurt in the violence Tuesday, Defense Secretary Mark Esper announced the Pentagon would send additional troops to reinforce the embassy.

A U.S. official, speaking on condition of anonymity, said those service members are Marines deploying from elsewhere in the Middle East, and published reports have stated the unit numbers roughly 100 members.

The official also confirmed that Apache helicopters spotted dropping flares over the embassy amid the protests were responding from a base inside Iraq as a “show of force.”

Elements of the 82nd Airborne Division have also been placed on alert status at Fort Bragg, N.C., according to a second U.S. official who also was not authorized to speak on the record.

Sens. Marco Rubio and Lindsey Graham, both congressional defenders of the White House and Republican lawmakers outspoken on issues of foreign policy, endorsed the president’s posture toward Iran and Iraq in tweets Tuesday.

Rubio wrote that Iran is “directly responsible for orchestrating the storming of the US Embassy” in Baghdad, and “must be held accountable for it & the safety of every American serving” at the compound.

The Iraqi government also “needs to remember they have an obligation to protect all diplomatic facilities,” he added.

“Argument from #Iraq govt (& some in U.S.)that we brought embassy attack on ourselves by striking #Iran’s proxies is garbage,” Rubio concluded. “They’ve been firing at us for weeks & killed an American … We should just let them continue without responding in only language these people understand?”

Graham wrote that he was “Very proud” of the president for “acting decisively in the face of threats to our embassy in Baghdad.”

Trump has “put the world on notice – there will be no Benghazis on his watch,” Graham added — referring to the Obama administration’s handling of the 2012 terrorist attack on the U.S. diplomatic compound in Benghazi, Libya.

The senator also cautioned officials in Tehran to “Choose your battles wisely,” and advised the Iraqi government: “This is your moment to convince the American people the US-Iraq relationship is meaningful to you and worth protecting. Protect our American personnel. You will not regret it.”