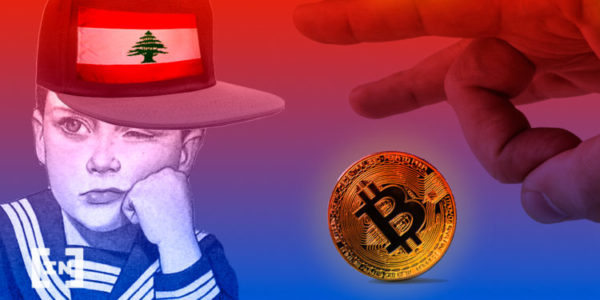 The middle eastern nation of Lebanon has been suffering its worst civil and economic crisis since its civil war in the mid-1970s. With no end in sight, the desperate yet resourceful population may start to explore Bitcoin as a weapon against the corrupt political and banking system.

BeInCrypto first reported on the civil unrest in Lebanon in October. Demonstrators took to the streets to voice their objections to a planned tax hike on tobacco, fuel, and telecom tariffs. As is often the case, this quickly morphed into a general movement against political and financial corruption.

As the protests kicked off, the nation’s banks were quick to shut their doors. When they reopened, after weeks of essentially denying depositors the right to access their own money, the institutions enforced harsh withdrawal limits and restricted international transfers. According to EuroMoney, the resulting demand for US dollars has created a black market that has seen the exchange rate increase by around 33 percent, despite the Lebanese pound being officially pegged to the US dollar.

BeInCrypto has reported on numerous examples of similarly restrictive banking policies being a potential catalyst for Bitcoin adoption. Since Bitcoin is free from the inflationary pressures of overzealous central banks, many analysts have argued that it can serve as a way for a population to “opt out” of an economy and as a check to the power of banks.

What might set Lebanon apart from similarly unstable nations is how self-reliant the population there can be. In the wake of the worsening economic situation there, the people are coming together to help one another, without the input of the authorities.

In the following video, an Al Jazeera reporter documents initiatives run by the people themselves to help others survive the ongoing hardship. Bakers have been offering free bread to the poor and, according to an APNews report, some citizens have formed a WhatsApp group to help raise funds for those worst off in society.

Despite their quickness to turn to the community rather than authorities, it would, of course, be naive to suggest that the Lebanese people will suddenly adopt Bitcoin as a further act of protest. With many people facing a choice between starvation and suicide, learning about Bitcoin is probably a long way from most citizens’ agendas.

That said, Bitcoin does offer an alternative to the centralized and often corrupt banking systems that are frequently at the heart of such incidents of civil unrest. The longer Bitcoin exists as a potential check to these institutions, the more likely it is that a population will become desperate enough to fully reject their own fiat system in favor of an alternative.

With major unrest occurring more frequently around the world, information about just how corrupt the current system is can only spread. Such knowledge could well lay the groundwork for a mass adoption of Bitcoin in the future.

A former professional gambler, Rick first found Bitcoin in 2013 whilst researching alternative payment methods to use at online casinos. Having concluded that the root of most of the world’s evils stem from a toxic financial system during his time reading International Politics at university, the disruptive potential of a decentralised, borderless asset was immediately clear. After transitioning to writing full-time in 2016, Rick was able to put his passion for Bitcoin to work for him professionally. He has since written for a number of digital asset publications in a variety of capacities. DISCLAIMER. Read More