China launches its largest rocket ever, as it eyes the red planet 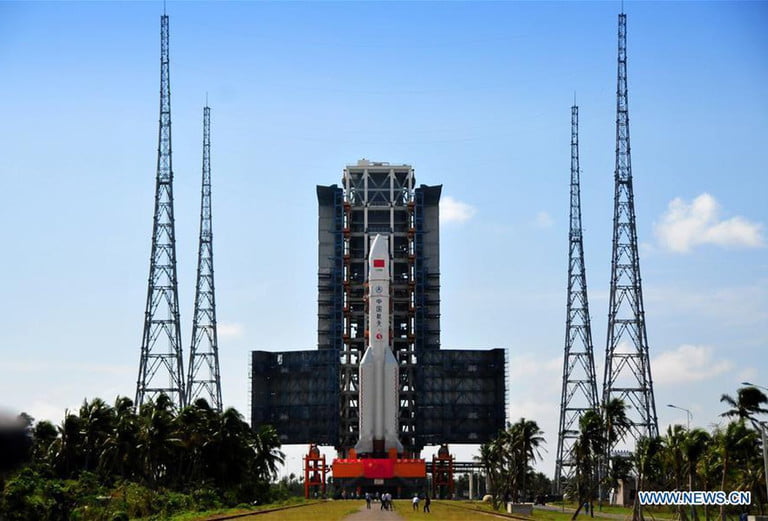 China launched its largest-ever rocket this week: The Long March-5 Y3 rocket took off from the Wenchang Space Launch Center in south China’s Hainan Province, carrying a Shijian-20 satellite. The launch took place at 8:45 p.m. Beijing time on Friday night, as reported by China’s state news agency Xinhua. Just over half an hour later, the satellite achieved its planned orbit and the China National Space Administration (CNSA) declared the mission a success.

The rocket stands at 57 meters (187 feet) tall, and is 5 meters in diameter around its core stage, with four boosters each of which is 3.35 meters in diameter. This makes the Long March-5 the largest Chinese carrier rocket to date, with a total weight of 870 tonnes and producing thrust of over 1000 tonnes at takeoff.

Typically, an Earth-Mars transfer orbit is an elliptical orbit called a Hohmann transfer orbit, in which a rocket begins in a low orbit around Earth and uses engine impulses to push out away from the planet into a higher orbit, gradually spiraling outward. Eventually, the rocket can be captured by the gravity of Mars and move into orbit around that planet instead.

Wu Yanhua, deputy director of the CNSA, confirmed to Xinhua that the country has its eyes on the red planet: “The success of the flight lays the foundation for a series of future space projects for the country including exploring Mars, returning moon samples and constructing its own space station,” Wu said.

The path to this launch has not been smooth. Although the Long March-5 completed a successful first test flight in 2016, an engine anomaly in its second flight sent the rocket off course and the mission was declared a failure. The third test flight, which finally took place this week, was delayed from January this year after problems were discovered with the new engine redesigns.